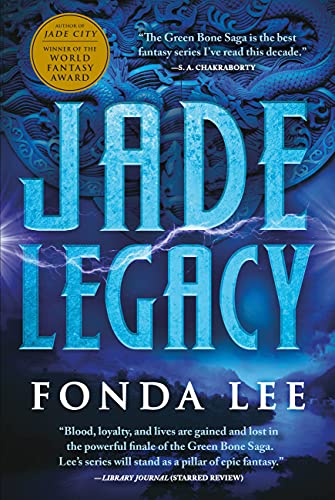 Jade, the mysterious and magical substance once exclusive to the Green Bone warriors of Kekon, is now known and coveted throughout the world. Everyone wants access to the supernatural abilities it provides, from traditional forces such as governments, mercenaries, and criminal kingpins, to modern players, including doctors, athletes, and movie studios. As the struggle over the control of jade grows ever larger and more deadly, the Kaul family, and the ancient ways of the Kekonese Green Bones, will never be the same.

The Kauls have been battered by war and tragedy. They are plagued by resentments and old wounds as their adversaries are on the ascent and their country is riven by dangerous factions and foreign interference that could destroy the Green Bone way of life altogether. As a new generation arises, the clan’s growing empire is in danger of coming apart.

The clan must discern allies from enemies, set aside aside bloody rivalries, and make terrible sacrifices… but even the unbreakable bonds of blood and loyalty may not be enough to ensure the survival of the Green Bone clans and the nation they are sworn to protect.

Jade War is the third and final release in Fonda Lee’s Green Bone Saga series (I previously reviewed books 1 and 2 here and here). Considering the events of first two books in the series, I had high hopes for this finale, but I was also a little trepidatious about where the final storylines were going to end up. Read on to find out what I thought of the ending.

Over the course of reading this series so many of my book friends commented telling me to “wait until you read the ending”, and I always returned by saying I was concerned about it. The problem is that for a long time I could not see a pathway to a satisfactory ending. Do not get me wrong, I was loving the hell out of the books. This is some of the best writing I have ever read. My anxiety came from previous fantasy reads where the end is always in sight (kill the evil wizard, protect the magical dragon, save the world), and the storyline worms its way through all kinds of trials and tribulations to get there. The thing is, this is not your typical fantasy series, and that is one of the reasons why I am so enthralled with it. Oh, and that ending? Lee pulls it off with flying colors.

As with the other two books, Lee does an amazing job with the character ARCs. In the end, I think Shae was my favorite character, going from reluctant clan member to important clan leader. Not to mention all of the personal stuff she goes through. One thing to note that makes Jade Legacy different from the previous two books is that the time jumps are more pronounced. This affects character-development in a profound way, as we get to know them with a series of small moments over large amounts of time. The other piece of this is that most of the main characters really evolved over the first two books, and I am not sure they had any development to go. Lee addresses this by bringing the next generation of kids into the fold, Hilo’s in particular. We get to see them grow up and have their own experiences and interactions with the clan. In my opinion, the new blood freshens up the narrative.

Of course, this book is the most emotional of them all. As expected, Lee does not pull any punches (literally). There are lots of violent scenes mixed in with more intimate moments, complimented with a ton of twists and turns in the story. This series has been filled with so much love and alternating betrayal that is has been an emotional rollercoaster, with Jade Legacy being the biggest culprit of them all. This book in particular is supercharged with drama and suspense, building up to an insane ending. When it was all over I had to sit back and take a few breaths to get my bearings.

I find it interesting when I see people comp this series to The Godfather or The Sopranos or any other Western gangster series. Those comps do not do The Green Bone Saga justice, as they are closer to Saturday afternoon programming. In my opinion, those stories are not nearly as emotive, the characters are not as well-developed, the violence does not marinate as fully, and there is no magic to speak of. No, do not force these stories into the same box. The Green Bone Saga has carved its own space in the fantasy gangster arena. Let’s give it the ground it deserves.

I cannot recommend Jade Legacy enough to fans of fantasy. If you are like me and have waited to read it, there is no reason to let it linger on your TBR. Grab some popcorn and a box of tissues and dive in.