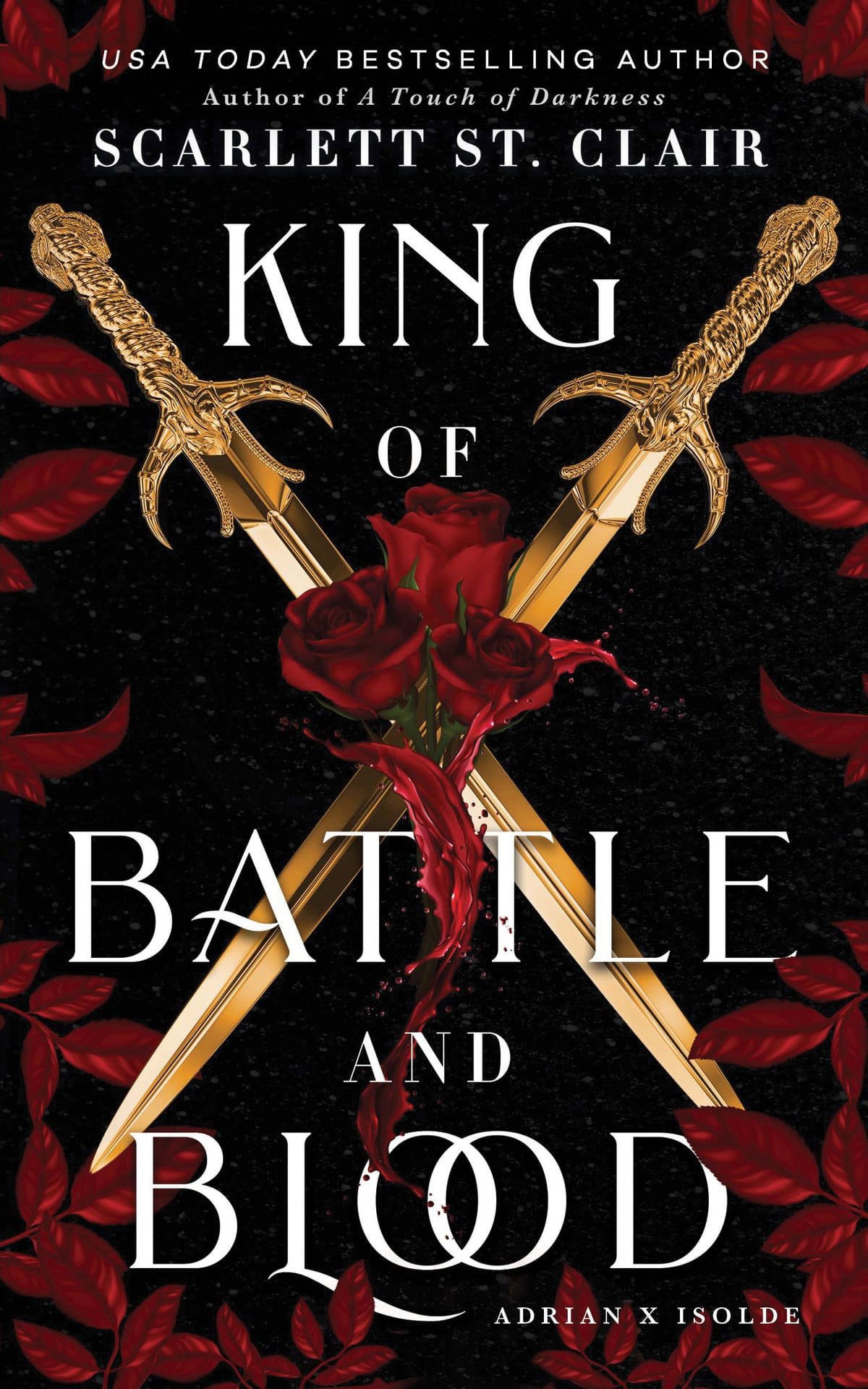 Synopsis
Their union is his revenge.
Isolde de Lara considers her wedding day to be her death day. To end a years-long war, she is to marry vampire king Adrian Aleksandr Vasiliev, and kill him.
But her assassination attempt is thwarted, and Adrian threatens that if Isolde tries to kill him again, he will raise her as the undead. Faced with the possibility of becoming the thing she hates most, Isolde seeks other ways to defy him and survive the brutal vampire court.
Except it isn’t the court she fears most – it’s Adrian. Despite their undeniable chemistry, she wonders why the king – fierce, savage, merciless – chose her as consort.
The answer will shatter her world.

Hello again dear reader or listener, today I thought I’d share with you some of my thoughts on my latest fantasy romance read. Because apparently that is all my mood reader will allow me to read since January… I am starting to think it’s taking revenge on me for all the years I hadn’t warmed up to the genre.

First though, here’s a funny peek into what it is like living with my brain: my memory isn’t the best sometimes, especially when it comes to similarly designed book covers. So here’s the thing, I went into this book thinking I was starting another one. Or, more specifically, I had the right plot blurb in mind, but my lovely brain had superimposed this plot to the age/maturity rating of another. So I started reading under the impression I’d be going through something YA to NA levels of smut and explicitness.

Dear reader/listener I was, very, very wrong. Not even 15% in and things get – let’s be classy – extremely sexy, and it doesn’t let up. At all. In fact heres’ your content warning: this book is definitely rated 18 and possibly the smuttiest book I’ve read to date so to quote booktok/booksta/book-what-have-you, this novel is a 7 chilies out of 5 level of spicy.

But then again it is a vampire romance so really, an extra dose of sexiness is to be expected hah.

However I must say this, the author toes the line of gratuitous smut overshadowing the plot, and she does it pretty well, remembering that she does actually have a story to tell and not getting completely carried away with the erotica bits of her novel (there would be nothing wrong with that per se, it just wouldn’t be my thing). It is also important to point out that I know a lot of readers could be put off but the amount of explicit sexy times or adjacents, that are present in this, and I do have to say it feels like a bit of a shame because this is actually a really good book with a fascinating mythology as well as well-developed characters and story, so it would definitely deserve wider readership. But it is what it is, and it regardless still worked for me because it had much more to offer as well.

Now that this disclaimer is done. Let me rave about all the goodies!

St. Clair’s story fits within a few great romance tropes, such as marriage of convenience and enemies to lovers, but it also employs some of my favorite tropes across any genre, for instance wrong/fake history being revealed for what it was, misconceptions being broken down, and an epic revenge story revealed gradually with great effect. There is stubbornness, there is doubt, and betrayal, but also some lovely comic relief and camaraderie, as well as several soft moments of feels. The reader also does get to several reveals before the main protag which is both frustrating (but in a good way), and riveting because you are just waiting for her stubborn (and let’s be frank, horny 70% of the time) brain to click it all together. The pace of the story and writing complements this brilliantly, making for a flowing narrative that you hardly want to put down. Moreover, St. Clair’s worldbuilding and mythology influences are of the eastern European/Slavic flavor so the overall novel gave me very strong The Witcher and Castlevania vibes.

The true stars of this book though are the characters, and mainly the lady protagonist’s development. Ok this sounds like stating the obvious but bear with me. As I said before, while frustratingly stubborn and slow in accepting that some things are not as she thought, or in accepting her feelings towards the vampire she is to made to marry to save her people, St. Clair’s protag, Isolde, feels extremely genuine and realistic because of it. In fact she’s lived her whole life knowing one thing and suddenly she is told and shown things aren’t what they seem, while also having to deal with the pressure placed on her by those who also have the same misconceptions as her. It’s easy to judge her for not being game with everything that she learns and sees faster, but when you take a beat to consider all of her context and the constant sense of being a traitor to those she is actually sacrificing her values for, you can truly appreciate the author’s character work.

So a slow clap to Scarlett St. Clair, she worked through one of my pet peeves perfectly, by giving well rounded and solid reasons as to her protagonist being the way she is, not simply be so for the sake of drama. This also means that for a good chunk of the story the main relationship is quite one sided, with Isolde being a bit of a huge hypocrite, but trust the process and believe me when I tell you that something that had the potential of turning into one of those very romanticized but lowkey toxic relationships, actually resolves itself into a badass power couple with both partners being equal and properly validated. It just takes a little while because that kind of resentment and hate built up over time is hard to shake off quickly.

Secondly, Isolde, aside from being a literal queen, is a Queen in attitude and style and overall BAB energy. She never falls into the whiny cliché, she never lets herself be subdued to fit a role or a command, and she certainly makes sure everyone knows she is very much aware of her own worth as a warrior and decision maker. But she is also compassionate to a fault and struggles to learn that duty to her people first might not always be the right course. Moreover, by the end of the book when her development arc has reached its peak awesomeness, she very much has step on me energy and I respect that.

And here is where things get even better.

St. Clair created this level of a character that requires a certain counterpart, and vampire King Adrian totally met the necessary expectations. In fact he goes beyond while also being the perfect supportive husband who doesn’t even bat an eye at Isolde stabbing an impertinent noble right in the middle of court, but simply cleans her dagger for her and nods proudly at his stabby wife.

“Your queen is a warrior first, a noble second. I suggest you keep that in mind if you decide to place your fate in her hands.” Then he looked at me. “And if, by chance, she spares you, I will not.”

This part really amused me actually because it was a case of – Book blurb and main lady protag: the vampire king is a ruthless monster driven by blood lust and greed for power. He is cruel and evil and the root of all that is wrong with the world.

The actual vampire king: drinks liters upon liters of respecting women juice, never undermines the lady protag, never treats her like a damsel in distress, is always extremely kind and polite, true to his word, is quite literally wrapped around her little finger doing every single thing she asks of him for nothing in return, even before they are married. He tells her he doesn’t need a wife, but he wants a queen to rule with him. Always makes sure he’s got consent for anything and doesn’t even bat an eye when she tries to kill him. He is not mad, just disappointed.

But I’m getting carried away and this review is already way too long so the last thing I want to mention is the focus on consent. You know me, I will always talk about it. Consent is sexy in whatever context. And I loved the way that the history of these vampires is what makes it so important to them to put consent for anything at the forefront. Very good stuff all around!

So to wrap up, this is not the kind of book everyone might enjoy for the above stated level of sexual content, but it is also a story full of mythical monsters, vampires who may not be the villains they seem, ancient curses and mysteries, as well as a solid cast of side characters that prop up a main duo that has awesome potential to become the power couple to rule them all, especially in the sequel coming out this December. I personally can’t wait to read Queen of Myth and Monsters!