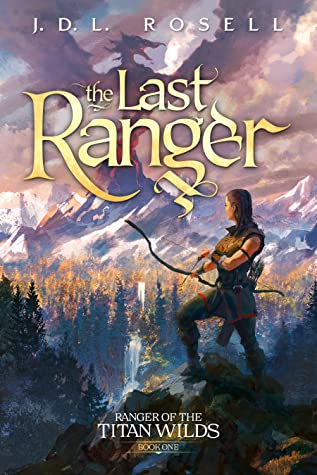 Josiah, aka J.D.L. Rosell is the author of the Legend of Tal series, the Ranger of the Titan Wilds series, The Runewar Saga, The Famine Cycle series, and the Godslayer Rising trilogy. He has earned an MA in creative writing and has previously worked as a ghostwriter.

Always drawn to the outdoors, Josiah ventures out into nature whenever he can to indulge in his hobbies of archery, hiking, and photography. Most of the time, he can be found playing video games or curled up with a good book at home with his wife and two cats, Zelda and Abenthy.

Betrayed. Hunted. Left for dead. But not even death itself can keep the last ranger from vengeance.

Leiyn “Firebrand” is no stranger to a fight. A brash ranger of the Titan Wilds, she takes up her bow to ward against the colossal spirit creatures known as titans, ever a threat to the colonies she has sworn to protect.

But no amount of skill can guard against treachery.

When tragedy strikes the rangers’ lodge, Leiyn vows to avenge the fallen. But if she is to succeed, she must embrace a power within her she has long denied.

Power to move mountains and rivers.

Power over life and death.

She did not choose this path, but Leiyn knows her duty. For if she fails, the legacy of the rangers dies with her—and all the Titan Wilds will fall into shadow.

To begin, I need to quickly mention the absolutely stunning cover and interior artwork that this book had. When I saw this book I immediately knew that this was a Félix Ortiz masterpiece but little did I know that there would be the abundance of interior artwork as well, including in the e-book copy. I am incredibly happy that I have a copy of this book for my shelves.

The Last Ranger is a single POV third person story, and we follow Leiyn’s story from her childhood, shown through memories as the main story takes place in present day with the majority of the book taking place in present day. I think that J.D.L. Rosell set out to portray a really interesting character growth arc with Leiyn. Something that is mentioned in the content warnings is racism and I’ll dig a bit more into that and specifically call out Leiyn’s extreme prejudice towards the native peoples, the Gasts. Now, I myself am Indigenous Canadian and I struggled with Rosell’s initial portrayal of a native peoples. He followed the stereotypical harmful “savage” tropes initially which almost made me DNF the book then and there. The Gast people do have more complexity as the book goes on but still didn’t leave me feeling great about how they were cast overall. I persevered through it because I could see Leiyn’s journey through overcoming the prejudice beginning to take place and she ultimately had a lot of learned behaviors to work through regarding it so I do applaud that learning arc. However because of the way the Gasts were cast, it lost some of that compulsive readability for me and instead I proceeded with caution rather than excitement.

Plot-wise, I do think the beginning inciting incident is a bit spoiled by the title. I won’t say exactly what happened, but I wish we’d had a bit more build-up to allow us as readers to really feel what Leiyn was feeling in that moment. Overall the plot was fairly fast and very travel focussed, Leiyn and her companions spend a lot of time in the Titan Wilds on horseback, which I didn’t mind. I think traveling is a great way to world-build and build relationships while also allowing for many encounters to occur along the way.

“… to thrive in the wilds, you must not be rigid like the chestnut, but flexible like the willow.”

Magic system was really interesting and ties into both Leiyn’s character growth and her prejudice. Mahia is the word that Leiyn uses and it’s a very spiritual magic force, she can see the lifefires of other beings and manipulate both them and her own energy. Semah is another word used to describe magic at times and it’s essentially the spirit of the world. I will say this is a very spiritual/Indigenous inspired magic system, it is very reminiscent of the concept of “All my Relations” which is an Indigenous belief that everyone, everything in the world is interconnected. It is a very soft magic system but it does also have consequences. There are unexplored limits and as Leiyn learns more about it and things were happening quickly, it fell into the plot-convenience bucket a bit.

Reading this review back, it sounds like I didn’t like the book, but thus far I’ve neglected to comment on the polished prose. I love descriptive (but not overly purple) prose and Rosell strikes the balance of descriptive and moving the plot forward really well. Whenever I sat down to read it, I could read several chapters and feel totally immersed. Overall, this is the first book in a new series and I’ll absolutely be continuing on in the series and checking out J.D.L. Rosell’s backlist as well. If you’re interested in giving this book a try, then you can enter the giveaway hosted as part of the Escapist Book Tour by clicking the link here.