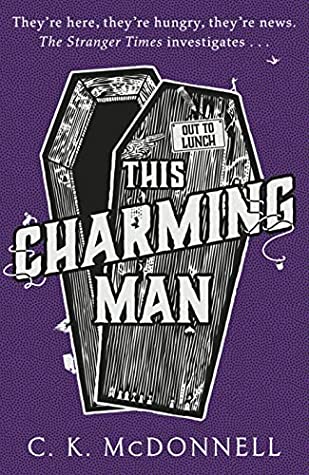 Vampires do not exist. Everyone knows this. So it’s particularly annoying when they start popping up around Manchester . . .

Nobody is pleased about it. Not the Founders, the secret organisation for whom vampires were invented as an allegory, nor the Folk, the magical people hidden in plain sight who only want a quiet life. And definitely not the people of Manchester, because there is nothing more irksome than being murdered by an allegory run amok. Somebody needs to sort this out fast before all Hell really breaks loose – step forward the staff of The Stranger Times.

It’s not like they don’t have enough to be dealing with. Assistant Editor Hannah has come back from getting messily divorced to discover that someone is trying to kidnap a member of their staff and while editor Vincent Banecroft would be delighted to see the back of any of his team, he doesn’t like people touching his stuff – it’s the principle of the thing.

Throw in a precarious plumbing situation, gambling debts, an entirely new way of swearing, and a certain detective inspector with what could be kindly referred to as ‘a lot of baggage’ and it all adds up to another hectic week in the life of the newspaper committed to reporting the truth that nobody else will touch.

Phillip has suddenly developed pointy teeth; he’s getting really wary of daylight and to top it off … he can no longer see his reflection in the mirror. Well, what does he think has caused that? Perhaps its an STD, he surmises … and that, reader, is completely on brand for a book in The Stranger Times series, it had me roaring from the get-go and is utterly, utterly entertaining. It’s certainly for fans of Pratchett and other comedic novels, but really does cut its own shape in the genre with a heavy focus on fantasy, world-building, and urban-central storytelling. I loved this and it continues to be a series I look forward to.

The plot: well, it appears, my good readers, that a vampire is on the loose. And, well, what do the Stranger Times report on if not vampires? The paranormal and fantasy aspects are turned up on high from the beginning which I thoroughly enjoyed. There’s new characters in the mix, namely Stanley, a journalist fired at another publication by Banecroft who farts like a trooper and only eats ice cream. Reggie is back and paired with Hannah, fresh from divorce proceedings, and Ox is on the Special Operations team this time … a duo which is nothing short of hilarious. Who knew a fence post could counter all kinds of magic?

Hannah is back, dragged through legal battles with her ex. Banecroft hasn’t lost his … charm? It’s all hoodoo from the start, as Banecroft would call it, there’s Peeping Toms, the Founders, and vampires, and that’s all in Hannah’s first meeting back. McDonnell has a brand, and he’s certainly on it, weird, wonderful, and everything stranger, the Stranger Times has a new editorial to write up and it’s certainly not normal.

I love that we get a heavy focus on the Folk and the Founders, there’s a lot of effort to flesh-out the world-building of the magical and strange in this one, and that’s something I’m certainly here for being a fantasy fan. Though, we’re still only just touching the surface.

If it needed proving, This Charming Man proves McDonnell is here to stay with his own brand of paranormal satire – much like how Pratchett has a comedic empire, I’m very sure The Stranger Times will be vast and plentiful series. I’m making room for the rest of the books on my shelf as we speak, what the Charming Man also does is show us that this isn’t a one trick pony. There’s many, many questions left unanswered with this which I’m sure means there’s many more stories for the Stranger Times team to explore. And I look forward to every one of them.

Banecroft is a very multi-layered character, the mystery of his life Charlotte comes forefront as the reason for his … abrasiveness? Though our Editor-in-Chief of The Stranger Times is all the comic relief we need. I bloody love this character and his harsh one-liners, he’s great. The right sort of caring, also bonkers and eccentric, he’s a lot more to do with the ‘paranormal’ problems this time and goes about solving it like a bull in a China shop, with Chekhov, his blunderbuss.

And the ending, the final part of the last chapter, and both epilogues … well, wow. They are pure genius; they both tie up loose ends and also expands the world and story in a way that dwarfs what we already know. I couldn’t possibly describe the events here as I don’t spoiler good books, or any, for that matter, but world-building comes to a head here. The magical, the Folk, the Old Magic. It is coming back.