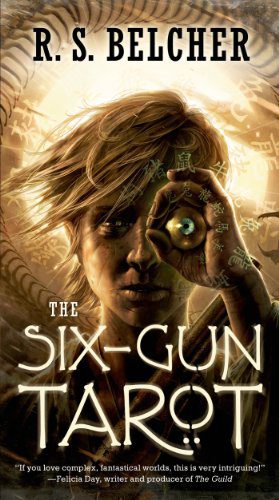 Six-Gun Tarot is the first book in the twisted weird west world of the Golgotha series by R.S. Belcher.
Nevada, 1869: Beyond the pitiless 40-Mile Desert lies Golgotha, a cattle town that hides more than its share of unnatural secrets. The sheriff bears the mark of the noose around his neck; some say he is a dead man whose time has not yet come. His half-human deputy is kin to coyotes. The mayor guards a hoard of mythical treasures. A banker’s wife belongs to a secret order of assassins. And a shady saloon owner, whose fingers are in everyone’s business, may know more about the town’s true origins than he’s letting on.

A haven for the blessed and the damned, Golgotha has known many strange events, but nothing like the primordial darkness stirring in the abandoned silver mine overlooking the town. Bleeding midnight, an ancient evil is spilling into the world, and unless the sheriff and his posse can saddle up in time, Golgotha will have seen its last dawn…and so will all of Creation.

R. S. Belcher has flown up my charts when it comes to his book releases and it all started with The Six Gun Tarot. Published in 2013, this is his first published work and he absolutely hit it out of the park by throwing everything and the kitchen sink into this story. With the recent release of the 4th book in this series, The Ghost Dance Judgement, I wanted revisit The Six Gun Tarot and to give it fresh eyes for anyone looking for something different and exciting.

The Six-Gun Tarot is a weird western novel that takes place in Golgotha Nevada, 1869. Following the events of the American Civil War and the movement out west to settle. With the “Gold Rush” we find ourselves in the forgotten cattle town of Golgotha. The silver mines in Golgotha have long since run dry, leaving the inhabitants to fend for themselves, but they struggle through daily life as best they can. Ancient evil is returning to Golgotha with strange events around every corner. This town has all the traditional Western troupes: The rugged Sheriff and his deputy, the general store owner, the Banker and his family, and of course the saloon and its shady owner. We are introduced to this town through the eyes of Jim Negrey as he makes his way across the 40 mile Desert to escape his past.

We follow several characters throughout the story, each one holding a secret just waiting to be uncovered. Some of the secrets are revealed, while others are hinted at throughout the entirety of the story and it will keep you guessing until the end. What would you do to keep your secret safe? The town itself often feels like a character in of itself with the way the plot unravels and keeps you guessing until the very end. Any horror fans would get a treat here as some of the scenes will definitely give you the chills. Whether it be the local inhabitants, the Asian population in the section of Golgotha named Johnny Town, the mayor with his ties to the Mormon Church, the deputy’s Native America heritage and how he deals with the hardships from not only the towns folk but his tribe as well, or the Banker’s wife who is much more than what she seems.

Mr. Belcher’s writing style is very digestible and reader friendly. Every chapter seemed to flow into the next one with ease and precision. I never felt bored reading any of the characters POV and the world building seemed to flow organically throughout the novel as opposed to info dumps. Any reader could pick up this book with ease and it is a great starting point for anybody interested in the weird western/fantasy genre.

Words cannot express how much I have enjoyed reading this book as it has expanded my horizon, not only in terms of western novels, but mystery and horror novels as well. Readers who need to care about their characters will adore the Six-Gun Tarot and the mysteries behind them all. Fans of Stephen Kings Dark Tower series would also feel at home in this world as they strap in for a wild ride. The Six-Gun Tarot will only leave you wanting more because Mr. Belcher just keeps on delivering the goods. Enjoy the journey and I hope it never ends.