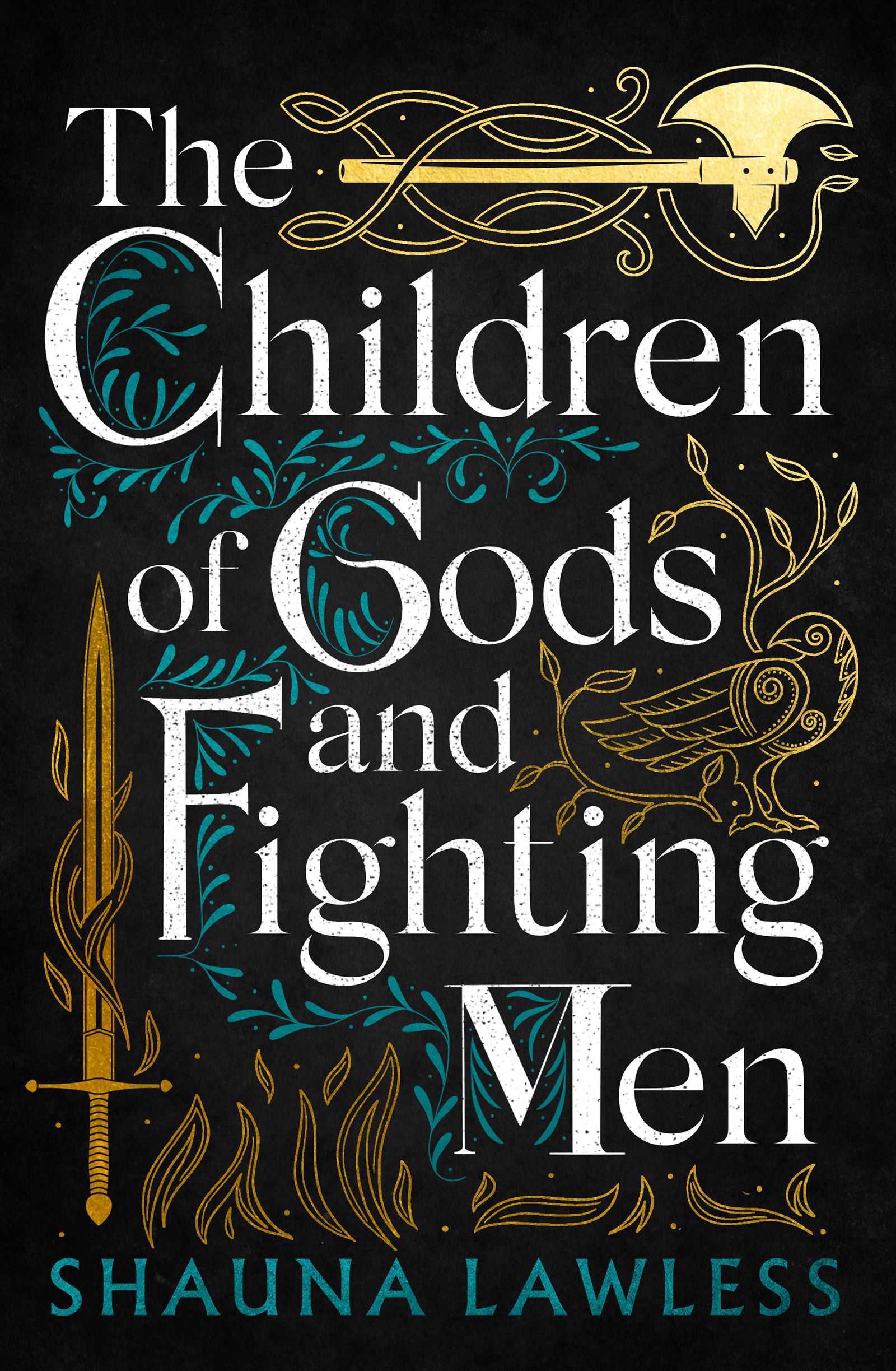 The first in a gripping new historical fantasy series that intertwines Irish mythology with real-life history, The Children of Gods and Fighting Men is the thrilling debut novel by Shauna Lawless.

They think they’ve killed the last of us…

981 AD. The Viking King of Dublin is dead. His young widow, Gormflaith, has ambitions for her son – and herself – but Ireland is a dangerous place and kings tend not to stay kings for long.

Gormflaith also has a secret. She is one of the Fomorians, an immortal race who can do fire-magic. She has kept her powers hidden at all costs, for there are other immortals in this world–like the Tuatha Dé Danann, a race of warriors who are sworn to kill Fomorians.

Fódla is one of the Tuatha Dé Danann with the gift of healing. Her kind dwell hidden in a fortress, forbidden to live amongst the mortals. Fódla agrees to help her kin by going to spy on Brian Boru, a powerful man who aims to be High King of Ireland. She finds a land on the brink of war – a war she is desperate to stop. However, preventing the loss of mortal lives is not easy with Ireland in turmoil and the Fomorians now on the rise…

This book was so fantastic! I don’t usually gravitate towards this style of fantasy, my usual pick would be a high-fantasy epic set in a historically-based world (usually medieval). This was a little different for me and I’d position it as a historical fiction, following real characters and mythological stories rooted in Irish history, with a light dusting of magic to tie it together.

As you begin the book, you will notice a vast characters list that I will admit was a little intimidating. At just over 400 pages I worried this wouldn’t allow enough time to introduce all the characters, and give them enough depth to make them distinguishable. But there was no need to be alarmed – our story is a dual-POV following 2 wonderfully-fleshed out females from opposing sides, and the helpful opening guide acts as a glossary throughout, though I found it wasn’t needed.

What made the story interesting is that our POV’s are actually limited bystanders as opposed to my usual chosen-one-POV-who-the-world-revolves-around-and-depends-on. The first, Gormflaith, and perhaps my favourite to read from, is Queen of Dublin and tries to manipulate situations using her wit. She has the power to control fire, but due to the persecution of her race, she and her brother are the last remaining and she is forced to restrict the use of her magical abilities to avoid detection.

Our second POV, Fodla, is a member of the opposing magical race (the persecutors) and is forced to go undercover as a healer to infiltrate King Brian Boru’s army. Here, she must feed back information to her clan who suspect an impending war between men. She possesses the power of healing but is forbidden to use it as it goes against the elder rules.

With the restriction on their powers, combined with their genders, our main characters have limited involvement in the affairs of men which was really interesting to see how they influence those in power, whilst simultaneously making me want to punch those in power in the face – pretty impressive!

Gormflaith was my favourite to read from. She reminded me a lot of Cersei from Game of Thrones, manipulative, often cruel, and willing to go to just about any lengths to protect her son. She is the mastermind of political scheming and I absolutely loved watching her plans fall into place – this isn’t a character to route for – on the contrary she will often do unspeakable things, and I can’t even say I empathise with her motives most of the time, but there is something remarkably satisfying watching a female character ‘get one over’ on her male counterparts. She isn’t just a ‘bad-ass’ character (which is a trope I love), she’s a character that uses all the tools available to her. I found myself smirking along with her, and silently ‘whooping’ through some of her terrible deeds (maybe that says more about me!?) She tends to see the worst in everyone (aside from her son), which is perhaps why the characters in her chapters seem so much worse.

Fodla, on the other hand, has a much kinder heart, and despite being sceptical about the goodness of men from the tales she has been told, she does begin to make up her own mind from her experiences. She has been through significant trauma of her own, and is still damaged from the lasting effects of an abusive relationship, but despite that she does her best to protect those around her, and I really enjoyed her arc as she begins to gain her own understanding of ‘good’ and ‘bad’.

Alongside the characters, I really enjoyed the plot. If The Last Kingdom is the book series for English mythology, and Outlander for Scottish mythology, then The Children of Gods and Fighting Men is set to become the equivalent for Irish mythology. I loved reading about Irish folklore, and the battles and history between kings, the divided kingdoms, and the impact of the different religions.

The magic system is very light in this story. Whilst there is a top-level story about the two magical races that have long-since been at war, this almost takes a back seat to the war that is brewing amongst mankind. It was fascinating, and I loved Lawless’ ability to weave what felt like 2 different stories together seamlessly. I’m really hoping to see more from the magical-side in book 2, but then I’m also yearning to find out what happens next between the Kings! (Maybe I’ll cheat and google that…)

Alongside amazing characters and a really interesting plot is some fantastic writing. Lawless’ prose makes this world so visual and yet so accessible, this is a story for everyone – for those who enjoy historical fiction that may want to taste some fantasy, and for fantasy lovers that are looking for something a little different. The pacing was superb, and flowed continuously making it a struggle to put down.

As a frequent fantasy reader, I did feel the ending didn’t have the same climax I’m used to – perhaps we can blame that on the Sanderlanche effect! Without a climatic ending I felt it read more like a drama and I can visualise how it will blend into the next book. This isn’t a criticism, just unexpected for me as I’m perhaps someone who enjoys something a little more explosive toward the end.

This book was un-put-downable. Fast-paced, fantastic characters, a world to dive head first into, and a light sprinkling of magic to tie it all together. Lawless has managed to take the best elements of a historical fiction and seamlessly weave it together with fantastical elements to create a story that is super accessible, super enjoyable, and refreshingly different from other books within the fantasy genre. It’s an incredible debut and Lawless really is one hell of a writer. I cannot wait to read everything else she writes!

This book is set to release on the 1st September – not long to wait – go pre-order a copy!