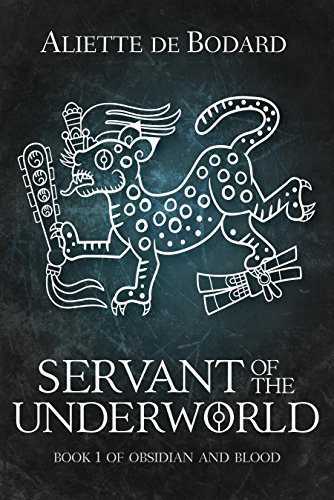 The first book in the critically acclaimed Obsidian and Blood trilogy:

Year One-Knife, Tenochtitlan the capital of the Aztecs. Human sacrifice and the magic of the living blood are the only things keeping the sun in the sky and the earth fertile.

A Priestess disappears from an empty room drenched in blood. It should be a usual investigation for Acatl, High Priest of the Dead–except that his estranged brother is involved, and the the more he digs, the deeper he is drawn into the political and magical intrigues of noblemen, soldiers, and priests-and of the gods themselves…

I actually read this book several years ago and remembered enjoying it immensely. So I decided to give this a reread but this time through audible and I’m ecstatic to say that Servant of the Underworld is even better the second time around. Mesoamerican mystery book with royalty, priests of the dead, magic, gods, family drama, and a dark theme to top it all off. If you are looking to dip your feet into a fast paced story in a dark world, then this is a great place to start.

Acatl is the High Priest of the Dead in the city of Tenochtitlan. There is magic in this world but the Gods are only appeased by the sacrificing of human lives. When a priestess disappears during a blood ritual and magic is unleashed on the world, Acatl is the one responsible for finding out who the culprit is. He is thrown into the devious and backstabbing world of politics and the many secrets left to uncover. Acatl’s investigation leads him to none other than his estranged brother who hold tremendous power in the city. What he discovers will set things in motion that will change the landscape as we know it.

Right off the bat you will notice how expertly the author weaves her words throughout the pages to describe the massive and detailed world. The visualization and tensions you will feel from reading will transport you instantly to this vivid but dark atmosphere. The pacing is also top notch and will keep the tension at it all time high chapter after chapter. Can’t say I am the biggest reader of detective novels but after reading Servant of the Underworld, I might need to breakout my old Sherlock Holmes novels and give them another read. Many readers are looking for non Medieval type fantasy stories and this one is a great place to start.

Fans of Black Sun by Rebecca Roanhorse should absolutely pick up this series. The chapters do not feel long and the story is written in such a way that you will fly through the book. This is one the first book in the series and it only gets better from here.