Mr. Hunter Shea has done it again! His work with cryptids is unmatched.

Are you craving a tale of total mayhem centered around a sacrifice gone very, very wrong? Then this is a book for you! 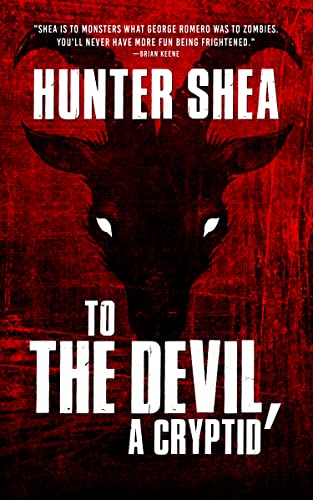 Down in Texas, even the legends are bigger.

Some say the Goat Man is just an old folk tale, meant to scare people from wandering too far into the woods. For a group of Satanists, crossing the infamous Goat Man’s Bridge is the first step to appeasing their Dark Lord. When their sacrifice goes wrong, hell is birthed on Earth. What rises from the ashes under a lightning-slashed sky will crave only two things: to bring about chaos, and bathe in the blood of the dead.

An ex-con, pastry chef, paranormal podcaster and terrified teen fight to stay one step ahead of their destruction as the town around them is crushed under the horns of the horrifying cryptid now possessed by demons from hell. The Goat Man has arrived, and it won’t leave until there is nothing left alive.

When this story begins, we see the perspectives of a handful of people that are all having a very different type of evening in the same neck of the woods; a group of people are about to sacrifice a goat, a couple is trying to spice things up, another duo are out looking for footage for their show, and one lone individual is looking to put a stop to the killing of cats in the area.

But what happens next changes all of their lives forever…

Some are killed instantly while the rest scatter to try to avoid being killed. Unfortunately, no matter how far or how fast they run, this creature will be after them eventually.

Starting off with quite the shock, this story is intense from cover to cover!

This novel was an absolute blast to read!

Readers, I want to hear from you in the comments!
Have you ever called out to an urban legend to see if it would show up?