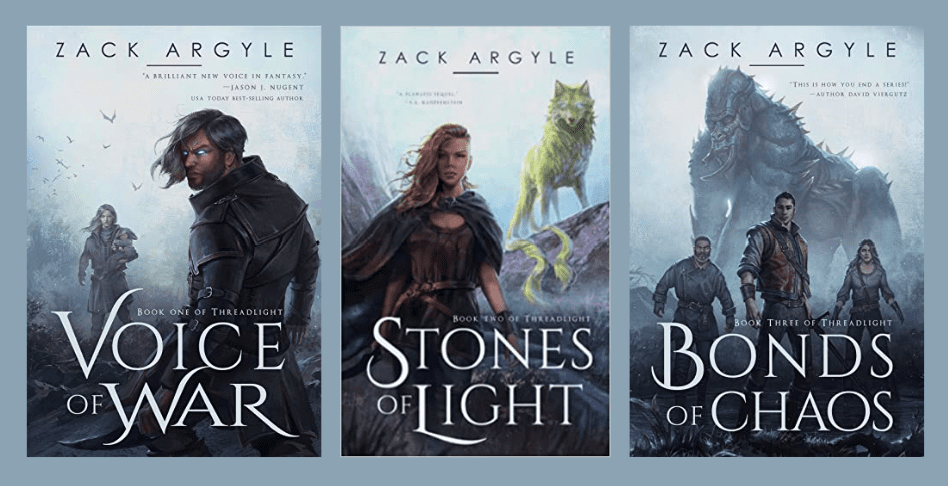 Updated on December 27th, 2022 to include review of Bonds of Chaos

This is a review for the entire Threadlight trilogy and there may be spoilers in the comments made about Stones of Light and Bonds of Chaos, however they are mild in nature. I cannot give a fulsome review without chatting about the characters but that does indeed spoil who is and is not alive by book three.

Their child will save the world, if they can keep the damn kid alive.

While preparing for the birth of his first child, Chrys Valerian is tasked with uncovering the group responsible for a series of missing threadweavers—those able to see and manipulate threadlight. With each failure, the dark voice in his head grows louder, begging to be released.

A young girl from a secret city in the center of the Fairenwild veers off course to explore the streets of Alchea, never expecting that her journey would end in chains.

Far in the deserts to the south, a young man’s life changes after he dies.

When Chrys learns who is responsible for the missing threadweavers, they come for him and his family. He must do everything in his power to protect those he loves, even if it means trusting strangers or, worse, the growing voice in his mind.

Together, these three will change the world—whether they intend to or not.

The slight pacing issue and quick ending from the first book was resolved fully in book two. I can honestly not find anything negative for book two.

The POV characters continue to grow and develop, I think Chrys continues to shine as the main character but he definitely has a different tone in this book. His internal conflict took a surprising twist that I wasn’t expecting and really formed the basis for the plot progression of book two. Laurel’s storyline also went in a direction that I wasn’t predicting and I’m really looking forward to her conclusion/resolution. Alvarax fully came into his own as a POV character, which was a complaint I had after his quick introduction in book one. Argyle really takes the time to develop the relationships between people and the familial and friendships are a highlight of the Threadlight series thus far.

Also I can’t not forget to discuss the unique creatures in this book. Chroma-wolves were already super interesting and then they get new abilities in book two which just takes them to a whole new level. There was also the introduction of the ataçan, or fantasy gorillas. The world needs more fantasy gorillas. The flora is also unique, especially the use of flowers that grow to create a path or photospores that can be used for light.

I think what really made book two a full five star read for me was that the stakes of the plot were more fully developed and realized. The plot still moves quite quickly and is incredibly engaging but the stakes feel more real in this sequel. I don’t want to get too deeply into details of a second book but safe to say if you’re even remotely on the fence after book one, book two improves on all of it.

In the spirit of full transparency, I was on the list of reviewers to receive an ARC of Bonds of Chaos. However, as soon as I held it in my hands I knew I needed to reread Voice of War and Stones of Light before finishing this journey. I’ve also since purchased the audiobook for my library because Adam Gold’s narration is such a joy to read and if you are an audiobook reader I highly recommend it.

From the early reviews of Bonds of Chaos, I knew that this would be an incredible conclusion. I’ve already said that everything was dialed in by book two and that remains in book three. The prose flowed really well, the plot was fast-paced and high stakes.

“People are like trees, remember? The least we can do is stand.”

The characters, by the beginning of Bonds of Chaos, have gone through so much growth since we met them in Voice of War and it was sad to leave them as I turned that last page. I think the biggest success of Bonds of Chaos is that the characters acted in such a way that was so incredibly true to the values and beliefs that each of them held. The cast of characters who were central to the plot grew beyond just Chrys, Laurel and Alvarax to encompass Iriel, Willow and Roshaw. Towards the end as the plot ramps up to the conclusion we even got glimpses into some of these other characters as well, which I enjoyed.

The stakes of the plot could not have been higher. The fate of Alchea and of Felia hung in the balance. Monumental actions had to be taken and first attempts didn’t always succeed. I think the conclusion of the Threadlight trilogy played out remarkably realistically. Once cogs are set in motion during war-time it’s hard to halt the gears and decisions aren’t always made by the Great Lord, there isn’t always time to stop and ask for counsel. Decisions are made and consequences must be lived with.

Thematically I thought the clash of religions and histories was really well done. Felia had histories and stories of their gods: The Heralds. The Wastelanders had their Gods and their King of the Hive. They clashed and it came down to reconciling the truth in each.

Overall, the conclusion to Threadlight was impactful and made me tear up (something that is quite hard to do, I’ll have you know).

I cannot possibly discuss this series without commenting on two things: the cover art and the audiobook narration. Firstly, the cover art is amazing, the artist Ömer Burak Önal has done incredible work on all three installments in the trilogy. Secondly, I’m fairly certain that Adam Gold could read me my grocery list and I’d love it but instead he narrates these incredible books that I’ll just listen to while I grocery shop. The depth of his voice is fantastic, each character feels distinct and unique. His voice is just able to transport me into Alchea or wherever else these characters are in the moment, and that is such a gift.

Overall, I am so incredibly happy to have spent time in the world that Zack Argyle has crafted and I cannot wait to read whatever is next. 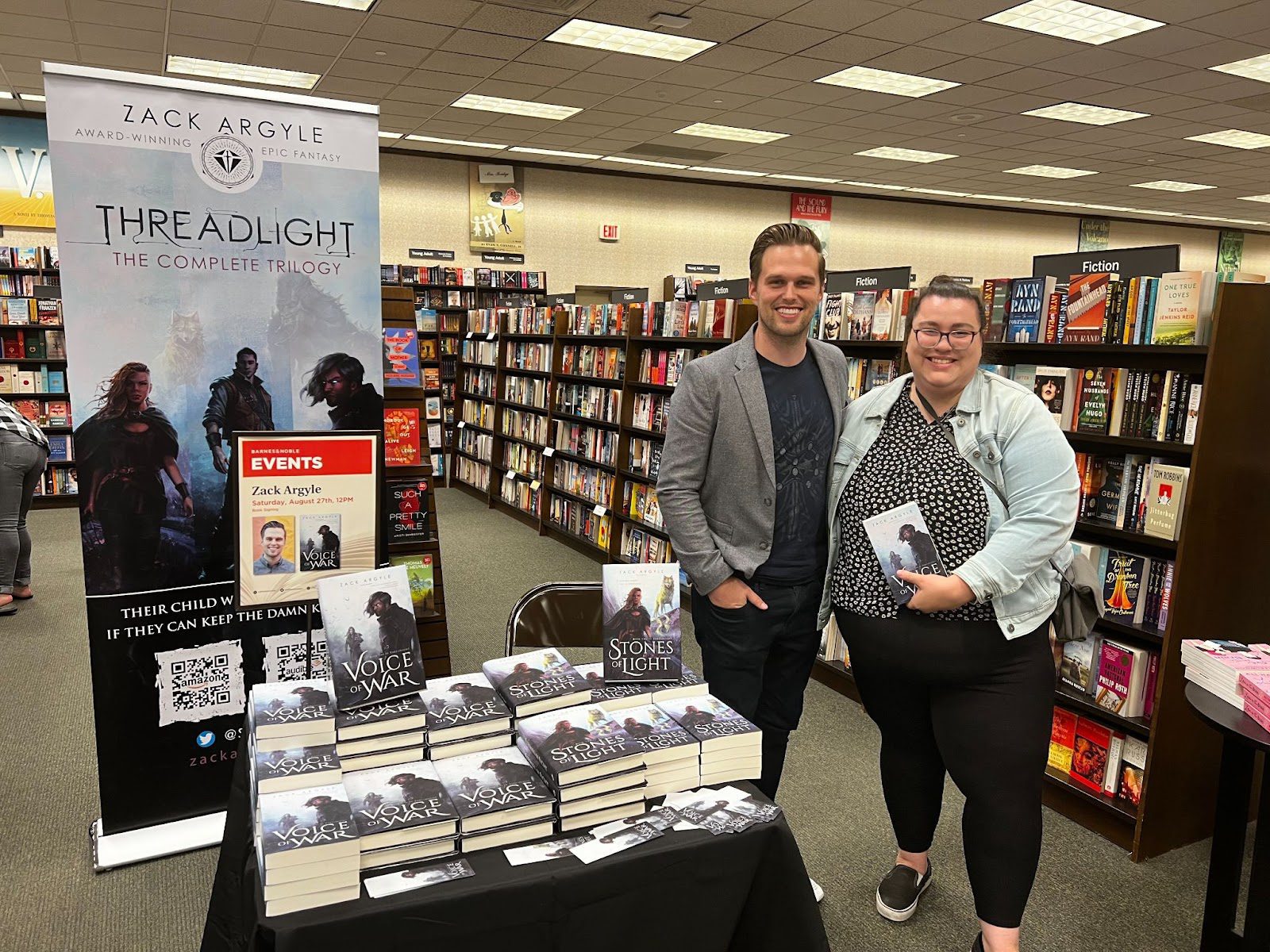 Caption: I went to Seattle for a book signing celebrating the release of Bonds of Chaos. Someone really should have told me to push my glasses up on the bridge of my nose.