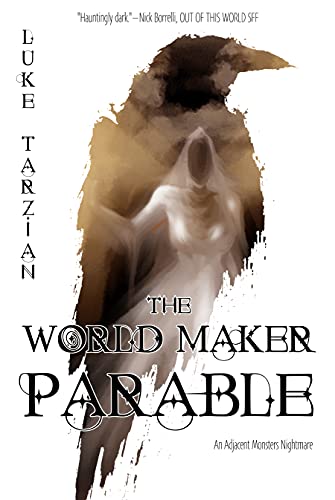 Guilt will always call you back…

Rhona is a faithful servant of the country Jémoon and a woman in love. Everything changes when her beloved sets the ravenous Vulture goddess loose upon the land. Forced to execute the woman she loves for committing treason, Rhona discovers a profound correlation between morality and truth. A connection that might save her people or annihilate them all.

You are a lie…

Varésh Lúm-talé is many things, most of all a genocidal liar. A falsity searching for the Phoenix goddess whom he believes can help him rectify his atrocities. Such an undertaking is an arduous one for a man with missing memories and a conscience set on rending him from inside out. A man whose journey leads to Hang-Dead Forest and a meeting with a Vulture goddess who is not entirely as she seems.

I have had my eye on The World Maker Parable for quite a while; I’ve been wanting to get to it ever since finishing the mind-meltingly amazing Vultures a few months ago (you can read my review of Vultures here.) Having read Tarzian’s freshman effort, I thought I had an idea of what to expect going into this one, a dark and twisted, mind-bending examination of the human psyche. And, to be fair, that’s mostly what I found. What surprised me, however, is how intimately I connected with the “parable” within.

In The World Maker Parable, we follow two characters point of views, those of Rhona, a loyal sword for her country, and Varésh Lúm-talé, a god-like being with power over creation. The novella begins with Rhona on a death-march into Hang-Dead Forest to the tree from which she will hang her beloved for her role in freeing the Vulture Luminíl. At the same time, Varésh is also journeying into the heart of the Forest, seeking help from the aforementioned goddess. The story is told through a weaving back and forth narrative, with alternating POVs and intersecting timelines. Although it is set in the same world as Vultures, this is a distinct story and is set several hundred (thousand?) years before, but expect there to be some things that will catch your attention if you’ve already read the first book. There isn’t much more I can say about the plot without giving anything away though, so this is the most you’ll get from me.

The World Maker Parable, like its predecessor Vultures, is not an easy read on multiple fronts. It’s dark, the plot is quite difficult to follow for the majority of the novella, and, quite frankly, it’s damn depressing. For the most part, though, I don’t think that’s a bad thing. Parable tackles some very heavy material and it does so in a very visceral way. At its core, it’s about guilt and the lies we tell ourselves in order to live with it, but also a look at what we can become if we never allow ourselves to confront the demons in our closet. Guilt is something that I struggle to overcome almost daily and can be a huge trigger for depressive episodes. My dad died nearly four years ago and I have so many regrets centered around our relationship and years leading up to his death. It’s easy to list the reasons why I was justified in distancing myself from him, but it doesn’t change the fact that I have to live knowing my father wondered whether I loved him or not when he died. Obviously, my situation is completely different from the one in the book, but it’s a good example of how guilt eats at us and the things we do to cover it up.

“They marched on through gnarled and twisted trees. Guilt nipped at Rhona’s heels like a hungry dog and her heart stung. It wasn’t supposed to have come to this.”

Despite the subject material, I will say that I had a lot of fun reading this book. I loved piecing together clues and trying to figure out exactly what was happening. Like I mentioned before, I spent quite a bit of time while reading Parable confused and trying to figure out what was going on, but when the revelations came, and oh boy did they come, they hit hard and fast. Victoria, fellow blog contributor and overall best wife in the world, read this with me and we had a very passionate discussion afterwards on what it all meant. I also made her track down my copy of Vultures so I could flip back through the pages to confirm some suspicions I had, after which I vowed to re-read it (something I don’t typically do.) I think this is Tarzian’s greatest strength, creating a story that compels you to witness it, even if it hurts you to do so.

Overall, I really liked The World Maker Parable. Tarzian has clearly grown as an author since publishing Vultures and I found The World Maker Parable to be a better book than its predecessor. While it addresses extremely heavy topics, such as guilt and, yes, madness, Tarzian explores it with a deft hand that proves that books don’t have to make us feel good in order to be great reads. I finished it feeling like my insides were scooped out and sanitized, in a concussion induced fugue state, and, honestly, I wouldn’t have it any other way from a Luke Tarzian Joint.

“Hell is a place of our own making. If you continue down this path, you’ll not come out alive.”