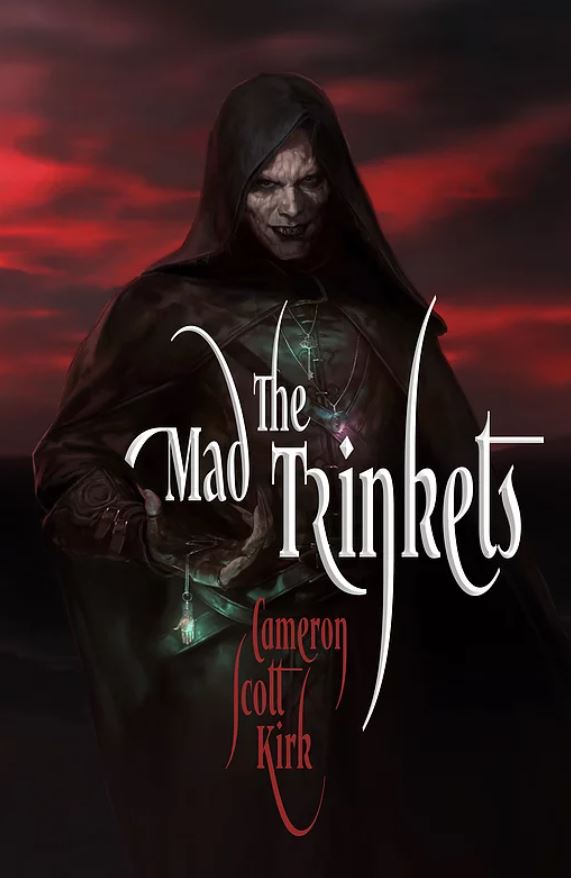 Five otherworldly metal trinkets. Six former brothers in arms, one a madman who will stop at nothing to use the power of the trinkets to wreak his vengeance upon the land.

When the renowned warrior Brynhild Grimsdotter and her biographer, William Barding, rescue a young girl chased down by King Bruwaert’s men, they find that the girl’s murdered father gave to her a trinket of colour-changing metal. They follow the girl in her quest to confront the king and avenge her father’s death.

The girl’s trinket is one of five that were forged in the monastery of the Ulfur monks using an otherworldly metal that struck the earth in a meteorite. The trinkets imbue their wielder with great power but there is a heavy price. The metal seeps into the wielder’s soul and they face a slow descent into madness and violence.

Now Tristan Drogos de Merlon, bereaved of his family, plague-wracked, and former marshal of the soldiers, is collecting the trinkets and building an army to exact his vengeance upon the world, and no-one is safe from the fires of his wrath.

*Places trinket around neck. The metal shimmers and changes colour as my typing speed increases.*

Dear reader, the descent into madness is slow and sure when the power of the trinket flows into its wielder. I myself felt as if I were slipping under the trinket’s spell as I read The Mad Trinkets.

Honestly I’m not quite sure what I expected from the book, so the absolutely brutal first three chapters floored me for my dithering. Within three pages a man is brutally hanged and sliced open for a trinket, while the ghost of the little girl he had purported to have murdered watches the real killer get away; not before the killer gets an erection from the power surge of his ill-begotten trinket.

That opening really sets the dark and unsettling tone, which scarcely lets up. I knew this would be dark but this is unashamedly grim-very-freaking-dark. Cameron Scott Kirk hails the horrible and there is a real talent to his writing in that, despite my problem with some of the subject matter I’ll get to later, had me hooked by the plot and pacing.

But wait, you may have thought, didn’t you mention the character above got an erection? Yes, and over the course of the story he’s not alone. The Mad Trinkets does a lot of things right but there are dicks EVERYWHERE in this book: dudes popping power boners, dicks bursting into flame, death by dick, a literal dick trinket that gives the wearer super dick powers,  … what could have been a real popcorn read becomes bogged down in places by its own interpretation of power; to become powerful in this book direct the male genitalia. There are other expressions of power that could and should have been used, at least for greater variation than this.

Now that I’ve mentioned my bone of contention, I have to praise the book for its characters. Boasting a number of shifting narrative perspectives, Kirk delights with Tristan Drogos de Merlon (the malevolently happy chappy on the book cover), who is one moment a tragic fallen hero, the next a deliciously unhinged Vincent Price/Lucien Lachance mashup. He steals the show among a cast of characters who similarly go from anti-heroes to repugnant evil doers from chapter to chapter. I’m unsure if I’m supposed to root for these trinket wearers or not but this was exactly the book’s appeal. It kept me reading on and on. The non-evil main characters contributed to the story well but ultimately had little bearing on Tristan’s quest to obtain all of the trinkets and godhood.

As for the trinkets themselves, I really loved the power and the corruptive influence they had on the bearers. The magic system is solid and suitably gruesome (the scene with the blood whip in particular is stunningly macabre). The descriptions of the trinkets made me want one of my own even though the dangers are vividly clear.

The Mad Trinkets is a definite page turner. The strength of the magic system and the scenery-chewing evil cult of Tristan Drogos de Merlon carries the book beyond its penile flaws and I would recommend it to anyone who feels in the mood for a dark and unsettling time.