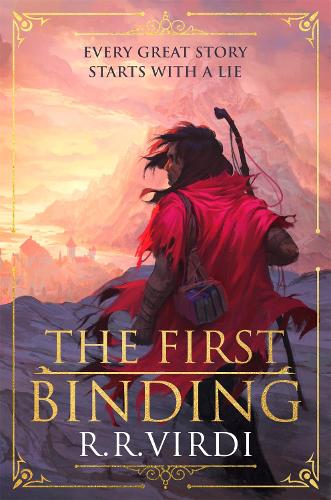 All legends are born of truths. And just as much lies. These are mine. Judge me for what you will. But you will hear my story first.

I buried the village of Ampur under a mountain of ice and snow. Then I killed their god. I’ve stolen old magics and been cursed for it. I started a war with those that walked before mankind and lost the princess I loved, and wanted to save. I’ve called lightning and bound fire. I am legend. And I am a monster.

My name is Ari. And this is the story of how I let loose the first evil.

“There’s a story behind everything and everyone––powerful tales, even if they don’t seem it on the surface. There’s power in stories. There’s magic in them. And each person’s life is a story itself, and with that, every person carries magic within them. And all of us are taught over the years how to forget it––lose it. My job is to remind you.”

I was delighted to receive an e-arc of The First Binding from Tor, as well as an audiobook copy for review from Macmillan Audio.

Like many other reviewers who have read The First Binding by R.R. Virdi, I’d be a fool not to mention the similarities to The Name of the Wind and The Kingkiller Chronicle. Honestly, that was what drew me in and made me want to review it. There’s people who love Kingkiller, people who hate it, people who are indifferent; I do not hesitate to call myself a super-fan. A lot of similar events happen, admittedly even in the same order as things happen in Kingkiller. Ari’s pride is often getting him into trouble the same way that Kvothe’s does and leads to a whole host of issues.

“It’s less impressive a feat, Ari, when we both know you’re being a clever little shit.”

That being said, I’d also like to mention the differences. Though the prose can be flowery, there’s also times that it comes back to a more common or accesible way of speaking for those not interested in melodic prose. It’s undeniable that the bones of this story are similar, but I think you could describe The First Binding as a love letter to Kingkiller. The similar situations all have their own twist on them. Ari is clever, but he isn’t AS multi-talented as Kvothe. Also, Kvothe wants the reader to forget that he isn’t as perfect as legend claims, whereas Ari seems to almost thumb his nose at the people who believe everything they’ve heard about him. It’s like he’s turning to the reader to bring us in on his joke, instead of trying to fool us too. There’s actually women professors within this book at the university, and women have more of a foothold in this world, though I do think BOTH books showcase powerful women.

“There’s a piece of me feeding itself to the fire. It hurts. I’m breaking apart and burning deeper now with no end in sight. It’s going to consume me like fire is wont to do. It needs more. Wants more. And I don’t have it in me to give it. To hold it. I’m the kindling, and I’m willing to burn to end him too.”

The First Binding also heavily pays homage to South Asian culture and Hindu mythology, especially the Ramayana and the Mahabharata. Much of the book centers around building the mythology of Ari’s world and his experiences in relation to the mythologies. If there’s one thing that can hook me into a book, it’s fleshed-out mythology. Virdi does this well, you can tell he enjoys the weaving of stories within stories.

We get past and present timelines, and it was refreshing to see the modern-day Ari experiencing just as much action as Ari’s past. Present-day Ari is full of life and mysteries, and he’s still getting himself into trouble even though he’s a lot wiser than he was a boy.

The thing with The First Binding is that Virdi has taken a formula people know well: young boy loses his family, seeks revenge, gains knowledge, makes mistakes, seeks redemption, and tells his story. The prose, the timeline, and the characterization make it easy to make comparisons. I love fantasy that is completely its own thing, but I also love my old faithfuls. I enjoy this formula and I like seeing the spin a new voice can put on it. Ari’s finds family within this book. He has a traveling bard friend who is entirely too full of himself and provides comedic relief. I am a HUGE fan of animal companions and Ari gains one throughout this novel. I’m a big fan of flowery prose and Virdi delivers on that front, as well. For those who love a good band of thieves or a heist story, we get a bit of that during Ari’s childhood. There’s so many wonderful things that make this an entertaining read and a comforting one to long-time fantasy readers.

The villain reveal! I wasn’t expecting it and it was immensely satisfying. Hats off to Virdi for pulling one over on me. I can’t wait to see where the story goes with this.

As for the audiobook, I enjoyed the narration of Adam Vikas. He made a fantastic Ari, and his reading was clear and concise. I like to turn my narration speed up quite a bit. Usually the lowest I like to listen at is 2x, and I was able to go up to 3x with no problem understanding him. This is an underrated talent of narrators, it truly takes a professional to be able to orate well enough for the enunciation to be heard at any speed.

The only qualm I had with the audio was that I did not love the voice he gave to Eloine (the most featured woman within the novel) and some of the other women. He didn’t do this for ALL of the women he voiced, but for some he tried to give them this super sultry voice that almost ended up seeming a parody of itself. When it came to Eloine, I much preferred physically reading the book rather than listening. Other than that, the audio was a major help because this is a rather large novel.

Speaking of Eloine, she’s a mystery unto itself. I can’t wait to read more about her and learn what drives her in the second novel. I can’t wait to see what lengths Ari is willing to go to get what he desires, to protect himself and others. The First Binding is an impressive novel and Virdi has solidified his name as fantasy writer with this one.

Thank you again to Tor and Macmillan Audio for the review copies!