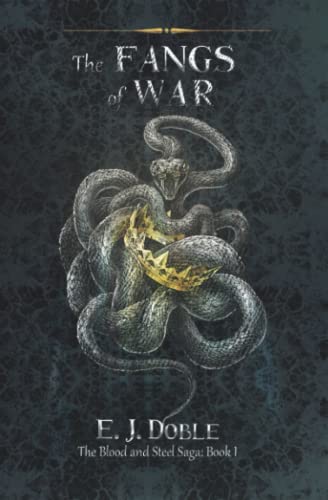 After the brutal execution of Provenci’s King by the roving forces of Tarraz, a new military government vaults into power with the nefarious Alvarez at the helm.

Hell-bent on bloodshed and the glory of an imperial past, he amasses the largest army seen in a generation and plunges the two nations into a bloody war, against the will of the god-like being known as the All-Mother.

Cavara, a general of the army at odds with her superiors over the war, is ground under the heel of the scheming Commander Revek and betrayed by her own people, left for dead on a distant shoreline. Saved by a passing ship and taken to the other end of the world, she is plagued by visions of a white void and a figure known as the Shadow Woman, who begins to unravel the true nature of the war – a conflict not only of men, but also of gods alike.

In a story of hope, power, greed and hatred, all are driven mad by the enemy within – none are safe from the Fangs of War.

What an amazing read this was! An absolute pleasure from start to finish and an outstanding addition to the fantasy genre.

Our story opens with the assassination of a king and the subsequent succession of a military tyrant, who declares war on neighbouring territories.

It is multiple POV, following different characters within the same region: the maniacal tyrannist; the ambitious and psychotic military leader; the vengeful and morally grey scout; her best friend and comrade journeying with her to keep her sane; a loyal and dutiful general only wanting the best for her people; a kind-hearted general whose only crime was being witness to a brutal murder and cover up; and his criminal underworld sister who would do just about anything to protect him.

After the war breaks out, the story jumps between characters as they begin their journeys through the epic and vivid landscape. I loved this as it meant there wasn’t too much info dumping in the early chapters: the world expanded alongside the plot.

Instead, these early scenes were used to expertly craft these incredible characters; they danced to life on the page and I honestly don’t think I’ve ever felt as connected to characters since a Hobb book. Throughout the story you can understand their motivations, feel their pain, and really route for (or hate) them. Be warned though, the stakes throughout are high and Doble has no problem hurting your favourite characters!

The plot itself has a lot going on. As the characters traverse through the rich world and we encounter new lands and characters, new plot points unfold.

As the story begins strictly in the capital lands, the plot is heavily focused around political scheming and warfare, however as we reach foreign areas, more elements are thrown in including monsters, gods, criminal heists and even gladiators for good measure! Honestly, I felt there was a bit of everything and I couldn’t get enough.

I have scored an 8 as I felt in parts the writing was a little convoluted, and I sometimes lost sight of the main points of what was happening. Also, within fight sequences, the sentence structure changed from descriptive, to short and snappy. I appreciate this is to reflect the fast-paced action but it didn’t always work for me. These points however are totally forgivable for such an enjoyable story, especially considering this is a debut!

One of my absolute favourite things about this book was the female characters. It is common to be disappointed in female protagonists in fantasy, but this had 3 lead female protagonists to route for, and I LOVED all of them. I think if I had to pick a favourite it would be a tie between Sav and Jinx. Sav is a good person deep down, but the impact of War has truly damaged her (there were some gorgeous moments with her companion, Markus that I really related to). Jinx is a rag-tag criminal with great banter and whilst she didn’t have as many chapters as some other characters, I loved all of them!

That leads me on to my other highlight: the dialogue. Doble really shapes his characters through the interaction with others, with banter and heart felt scenes that really develop their arcs.

For a debut novel I really think this is fantastic, I believe this is the first in a 5-part series and I honestly cannot wait to see how this continues.

Trigger warnings on violence and gore, trust me when I say heads be rollin’, throats be slittin’ and limbs be choppin’ left, right and centre in this, but then it is a war novel!

If you’ve made it this far in my review and still wondering if you should read it, take this as your cue and go and get it!

And one last point… I’d never base my review of a book on anything related to the author, but it’s also worth pointing out he’s only 19! It absolutely blew my mind! Definitely an author to watch 👀