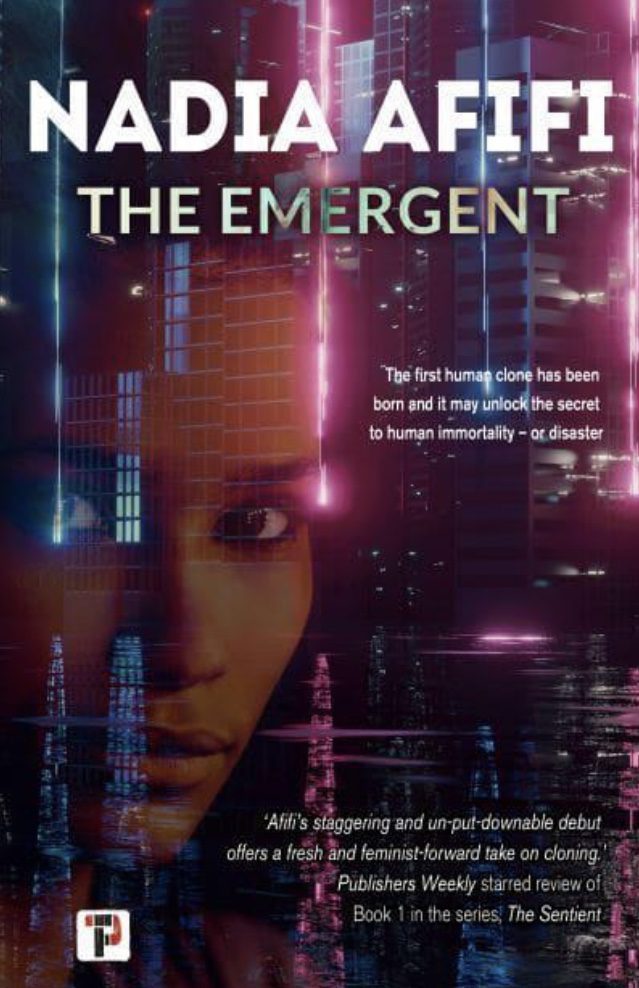 Neuroscientist Amira Valdez is in danger. Andrew Reznik, the ruthless leader of the fundamentalist Trinity Compound, is using a powerful mind control drug to form an army with a shared consciousness and a single goal — to wage war against the outside world. And he’s determined to capture Amira to study the strange neurological connection he has with her.

The world’s first human clone has been born, and thanks to mysterious scientist Tony Barlow, it may unlock the secret to immortality — or lead to disaster. Amira and Barlow form an uneasy alliance for protection from their common enemies, but their quest for breakthroughs may lead to dark secrets that Barlow would rather keep hidden. All the while, Reznik is never far behind, and his link to Amira is growing stronger every day.

The Emergent is an ambitious balancing act — on the one hand, it runs deep with philosophy, and on the other, it’s a complex web of political intrigue. To weave a tight plot while exploring metaphysical conundrums can be a tough balance to get right, but Nadia Afifi has pulled it off in style.

Amira Valdez is the book’s secret weapon. She’s a tortured soul in a cat-and-mouse situation where there are too many cats, and capture is inevitable. If it isn’t a religious-fanatic-cult-leader trying to climb inside her mind, it’s a sociopathic scientist pushing her forward like a pawn in his sick game. But how does she deal with all this pressure? Simple. She protects the people she cares about.

Amira is no helpless damsel. She’s one of the most powerful players in this story, able to tap into people’s minds and even control them if necessary. There’s always a danger laced unspoken in every chapter that Amira could be twisted into a shape every bit as villainous as the forces trying to cage her. But it’s her loyalty to her friends that roots her, and us, in this bold and vividly painted world.

The future portrayed in The Emergent is every bit as compelling as it is chilling, and it feels expansive, disparate, and all-too real. There are so many fine details on display, that it’s a pleasure to soak up the world, where space is accessed through elevators, machines can open up a person’s mind to a holographic display, the right cocktail of chemicals can make entire armies susceptible to suggestion, and a woman has given birth to a clone of herself. It’s jam-packed with ideas. And every detail carries its own quandary. Is it right to invade a mind? Is your child its own person if it carries a copy of you within it? And it’s in these corners of the world where a lot of the philosophy is given room to breathe.

The book isn’t so much about searching for answers as searching for the right questions. Amira’s pulled between knowing who she can trust — but she can’t find the answer if she doesn’t know the right question to begin with. It’s all noise to her, until the climax of the story cuts through the static and washes everything in clarity, going places that are deep and daring, to pit life against death quite literally.

The Emergent is a fascinating delve into questions that are supposed to remain as questions. But don’t think for a minute that it’s all talk and no play. The chapters are action-packed, lyrically written, with enough twists to keep you guessing. Just when you think you’re on level ground, something comes along to swipe you off your feet. And once you close the book, you’ll be left with plenty to chew over.

In terms of pacing, I found the second half of the book stronger than the first. I read the opening sections slower, indulging in the world and the way it built. But the final third, in particular, really flew. This is one of those books that reward you for getting to the final page in a big way.

Much like a mind, The Emergent is all about making connections. It yearns to make sense of things which shouldn’t go together, and yet, somehow do. It bridges action with philosophy, politics with character-study, the conscious and the unconscious, life and death and everything else in between. For those who connect with this story and its themes, you’ll find a depth that’s intriguing, and a story that’s sophisticated, slick, and satisfying. And for those who just want to sit back and enjoy the chases and the bullets and the cool camaraderie of a band of misfits struggling to find their place in a broken world, you’ll find that this delivers in spades. It’s a superior, cerebral sequel that packs a punch and will leave you craving more. It doesn’t just emerge, it looks up, aims for the stars, and soars.