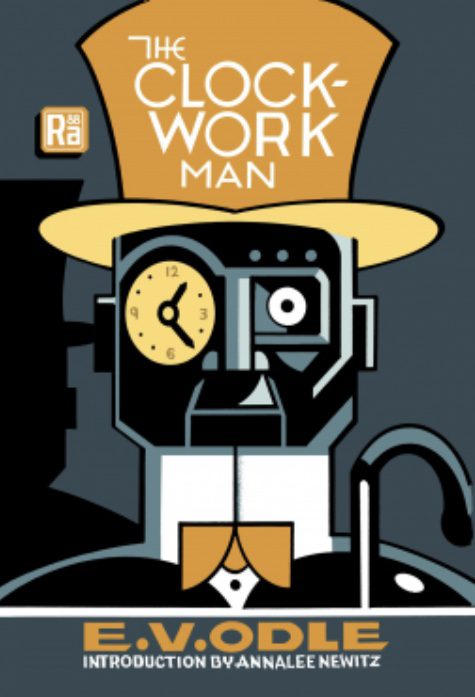 In the first-ever novel about a cyborg, a machine-enhanced man from a multiverse of the far future visits 1920s England.

Overshadowed in its own time by Karel Čapek’s sensational 1923 play R.U.R., about a robot uprising, The Clockwork Man is overdue for rediscovery.

The Clockwork Man is a book that was way ahead of its time. It’ll get your cogs turning as it masterfully spins the gears of speculation, humour, and invention.

Originally published in 1923, this novel is the first example of a cyborg in fiction. It’s one of the classics of proto-SF that The MIT Press have included in their Radium Age collection. And it’s a cracking little time-travel novel.

There’s a gentleness about the book that’s really pleasant to imagine — a quintessential Englishness that meets the arrival of a time traveller from 8,000 years in the future. The clockwork man appears in a stereotypical 1920s country village (camouflaged in a hat and wig) and engages in a game of cricket before being considered an oddity. That tells you everything you need to know about this story. It’s one of those rare gems that delivers a complicated time-bending multiverse-spinning narrative with charm and style. It’s the literary equivalent of a dandy gentleman doffing his hat and giving you a bow. There’s an etiquette and sense of wonder about the way it’s written which taps into the comfort of nostalgia and milks it for all its worth.

There’s so much character to this book. The plot is told across multiple perspectives, all surrounding the strange man with a clock in his head who can seemingly manipulate reality. In many ways, the ideas on display have never been more prescient. What is our relationship with technology? What is humanity and where is it going? Who are we, and who should we be?

There are so many layers to the story, and yet, it never feels dense. For example, a number of brilliant moments show characters reacting to the clockwork man in different ways that could either be seen as simple contradictions between two people, or a commentary on the influence of prejudice on society, the lack of acceptance to anything which challenges our preconceptions, and humanity’s resistance to change. This book goes as deep as you want it to. And in many ways, that makes it even more enjoyable. Like a spinning clock, it can either tell you the time, or it can show you the inner workings of what makes us tick, and have you pondering the question of why the seconds persist at all.

And it’s funny. There’s a comical touch which keeps things fresh, and it never takes itself too seriously. A polite absurdity touches every page. But what’s impressive about this is that the tone doesn’t jar. The light-heartedness never feels gimmicky or misplaced. It’s simply a delight.

An analysis of the book by Annalee Newitz in the introductory section provides a brilliant insight into the story. It reveals the flaws in the book. But it also celebrates its strengths. And I enjoyed the candid way that it introduces all that follows.

Published by The MIT Press as part of their Radium Age series.