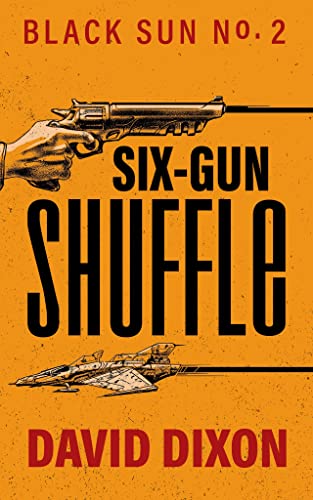 Snake and the boss have made a lot of enemies, but up until their trip to Yaeger, they’ve never had any beef with Michael Ver, the galaxy’s most bankable popstar-mainly because they hadn’t met him before. After the boss teaches Ver a lesson about the difference between looking tough and being tough, he finds himself a minor viral video star and catches the eye of a gorgeous redhead named Kell.

Things are looking up.

That is, until Kell goes missing and the boss goes after her. After a shootout with Ver’s crew, things go from bad to worse-nobody can find Ver, and Snake and the boss are the prime suspects in his disappearance.

The next thing they know they’ve got a bounty on their heads and hardly a friend in sight. Carla and Kell are the only people they can count on, but has Kell been playing a different game all along? It’s a mixed-up tale of bounty hunters, crooked cops, popstars and… insurance agents?… in Six-Gun Shuffle.

Six-Gun Shuffle is all about this: Two worthless scallywags end up in a conspiracy that will have them rampaging through stealing hulking pieces of metal, money and gun chases. Oh, and there are plenty of gun-chase sequences and stupid cops that our two intrepid heroes, Snake and the Boss. This novel is really all about Snake’s poor attitude and his idea that the world revolves around him. Also, let’s add to the fact that while he’s a delightful companion to his boss, he always ends up sleeping with the Boss’s girls.

This is a sleek, cyberpunk style adventure set in space, add a dash of Star Wars, a dash of the Orville and elements of Farscape and you’ve got a rip-roaring adventure across the galaxy. You’ll go to bars, meeting plenty of bounty hunters who you don’t want to mess with. You’ll come across Snake’s wonderful and snaring narration while dealing with the Boss, who really from Book 1, has had a lot of improvement. His character shines through personally, with a ton of flair being added. You’ll end up like the Boss. But then again, you’ll end up disliking and liking Snake at the same time. Because he’s a dislikable asshole. He’s like Jack Sparrow in Space.

And this novel has strong female characters: Carla, the fierce bounty hunter that lives by her own rules, and Kell, who is not all who she seems to be. I don’t wish to spoil, but there are badass heroines in this novel too. They add so much freshness to the novel because they give an alternate perspective of how Snake and the Boss’s adventures through space cause so much trouble that they have the authorities, corporations, evil corporations, evil wealthy millionaires all hunting them down..