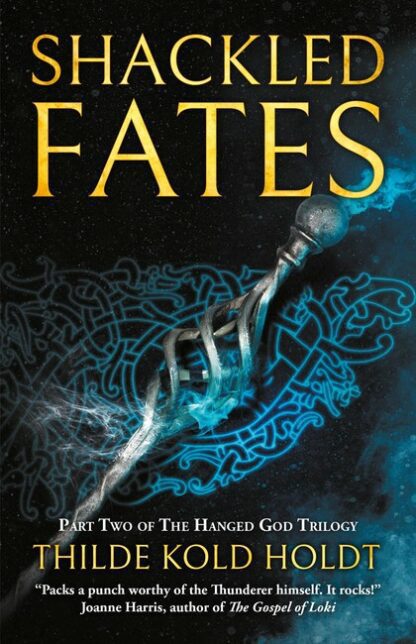 As Ragnarok looms, the trickster Loki breaks free from his chains.

In the battle to come, all shall die, but Ragnar will do anything to save his gods.

Einer scours the nine worlds for Hilda, who walks among gods and goddesses, searching the truth of the Runes.

For centuries Siv has run from her past, but she knows that to protect her daughter, and Midgard, she will have to face her worst fears.

It is time to confront the Alfather.

First, thanks to Hanna and the Rebellion team for providing a review copy that didn’t affect my review. And thanks to Thilde for writing such an awesome book.

Shackled Fates is the second volume in The Hanged God trilogy, the story that carries right on from the first. Right back into the action, right back into the tale; the bard strums his guitar and continues the fireside tale of Vikings, their gods, and the impending final battle. Holdt effortlessly writes with a voice that’s whispered from ear to ear, passed down through the histories and into the story we have in front of us; with face-paced action, large-scale battles, and whispers in the wind, we’re transported through the Nine Worlds again on a story that promises to change the fate of them all.

I’m not sure I’ll go too much into the plot specifics as I do hate to spoil a good story – and this certainly is that and more – and someone may be reading this to get a taste of the series … so, hey, go and read Northern Wrath first! But what I can say is, we pick right off from the scene we left with. No time has passed since the end of the first, save for a few panted breaths. While Nothern Wrath focused on a revenge story for the Vikings against Christian southerners who threatened their way of life, their very belief system, Shackled Fates deals with the ramifications of that. It focuses on the gods, the aesir and the vanir, and the doom of the nine worlds. It’s very clever how this entire story springs from the decline of one belief system and we see that crumbling throughout the pages of book two, and the desperation of Odin to stop this. To regain control.

I love the writing. It’s clear, straight to the point, and has a very distinct voice. It doesn’t beat around the bush, it tells a clear story and the voice, the fireside voice, it’s still there, ever-alluring. Holdt’s books have a certain tone to them; Northern Wrath introduced us to it and Shackled Fates convinces us that it was no mere mistake, that The Hanged God Trilogy is written with a sound as though it’s stripped out of the sagas, read by the Alfather himself. The husk of a battle-worn voice calls on you, tells you of what really happened to the gods, the Vikings, and of our history. It convinces you this is genuine, the real way things happened. It’s such a joy to listen to. Because despite reading it, it feels like I’ve been told the story.

The setting is right out of myth. As I said before, we’re in Valhalla for the duration – most of it. The glorious halls with gold shields that fall from the roof and endless mead. This time we see a lot more of the gods, Asgard as it were straight out of legend. The very buildings themselves absurd like only the powers of gods could make them. The powers of the gods are absurd, very godlike, and very powerful and all seemingly authentic. I said it about the first and I’ll say it about this one, the story feels very genuine insofar as we’re experiencing a history but through the lens of Viking belief. If at once you take what the Vikings believed as true, then this novel is as the Alfather himself and the trickster Loki.

Battles in Valhalla on the plains of Ida are ridiculous in the way of the number of bodies that pile up and the mountains of body parts – here, the battles feel like a visceral fever dream. That of lakes of blood and hillocks made from hacked limbs. At times, when we’re with the gods, Holdt paints a picture with words in similar style to a surrealist painting, and I’m here for it. It’s wacky, dangerous, and ever-intriguing.

One thing this book is not short of this time is being able to pluck, pull, and cut away your heartstrings, while it watches in glee. It’s not short of tragedy and there are difficult parts of the book that prove Holdt has made the plot, the characters mean something to me, and despite the pain, I enjoyed that. This mounts into an ending that leaves me hanging off the edge of a cliff … I’m desperate to read on and am assured in myself that it’ll be an incredibly long wait until the final installment is in my hands.

Overall, Holdt does a fantastic job and proves once again she can spin a tale worthy of the gods and the nine worlds. Read it!