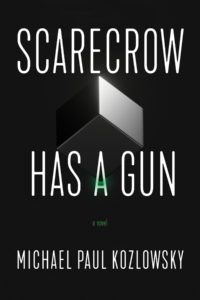 Never trust other people’s memories, and watch out for your own.

Sean Whittlesea was there when his wife was murdered. He saw the light leave her eyes. He held her dead body in his arms. He knows he wept, but he cannot recollect a single other detail. Tormented by the tragedy, Sean relives the horror over and over again. As he struggles to recall what really happened, his imagination serves up an endless chain of scenarios. The truth, however, remains hidden in the vault of his memory, and the key is nowhere to be found.

Nearly two decades later, Sean, now remarried and a father of two, wins a bizarre contest hosted by his eccentric boss. The prize is the Memory Palace, a state-of-the-art black box that purportedly allows its possessor to relive every moment he has ever experienced, playing out all the memories on a screen.

While the small machine at first appears to be the answer to the mystery surrounding the death of his wife, it instead upends Sean’s life. He pushes his family further and further away as the Memory Palace forces him to confront harsh realities and difficult questions that he lacks the strength to face or answer. Spiralling downward, Sean encounters increasingly harrowing challenges that force him to realise that his memory is not the only thing at stake. To recover the truth about his past, Sean must fight for his very life.

Scarecrow Has A Gun is packed with intrigue and philosophical exploration, diving into the differences between truth and memory. It poses questions like ‘how much does the past shape us?’ Or ‘what if you discovered your past wasn’t what you thought?’ And the answers come in the form of a little black box.

You’d be hard-pressed to find a more complete analysis in fiction of the role our memories play. One of the book’s greatest strengths is how much speculation it draws from such a small item as a device which replays memories. At times, it reads like a hybrid of speculative thriller and family drama, but really, it’s a character study of one man’s struggle to come to terms with his past.

The tone is grounded, which is impressive, because some of these characters could step off the pages of a Bond-villain playbook. Yet, the story never strays from the believable.

The prose is clean and easy to read. It’s introspective, delving into the minutiae of life, and at times, the pace can be slow, but this allows room for the book to tackle ambitious themes. There are no laser-battles or explosions to be found here. It’s the relationships between the characters where the fireworks lie. Descriptions linger in the details, but deliberately so, as this feeds into the book’s questions. It succeeds in making you feel like you’re living through things along with Sean, and actually adds a layer of depth here that would be missing otherwise.

Don’t expect the mystery of the book to form its central conflict. You’ll have to wait for the answers, just like Sean. But when they come, they’re worth the wait.

Like the Memory Palace itself, Scarecrow Has A Gun dives deep into the past, searching for truth. For fans of speculative fiction who prefer a contemplative, thoughtful read, this is one to remember.