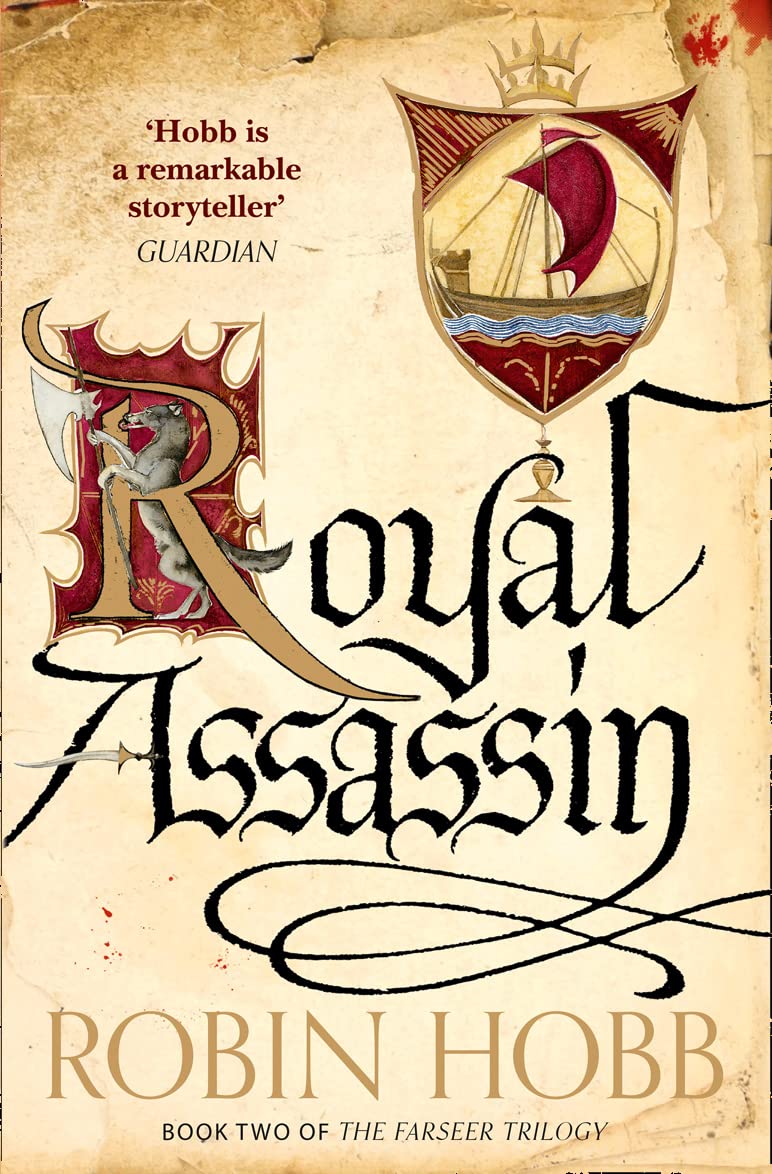 Fitz has survived his first hazardous mission as king’s assassin, but is left little more than a cripple. Battered and bitter, he vows to abandon his oath to King Shrewd, remaining in the distant mountains. But love and events of terrible urgency draw him back to the court at Buckkeep, and into the deadly intrigues of the royal family.

Renewing their vicious attacks on the coast, the Red-Ship Raiders leave burned-out villages and demented victims in their wake. The kingdom is also under assault from within, as treachery threatens the throne of the ailing king. In this time of great danger, the fate of the kingdom may rest in Fitz’s hands—and his role in its salvation may require the ultimate sacrifice.

The second book in the Farseer Trilogy immediately follows the events that unfold in Assassins Apprentice.

Fitz is dealing with new found difficulties after the assassination attempt on his life and now the Redship Raiders are posing an even greater threat. Raiding and forging villages across the Duchies they are inadvertently causing separations between the coastal villages and those inland. Desperate, Prince Verity travels to the mountains in search of Elderlings leaving the Kingdoms in the hands of the scheming Prince Regal.

Let me begin with Hobb’s writing style. After reading Assassins Apprentice, I described the experience as diving into a mug of molten chocolate. It was rich, it was comforting and despite the woes of Fitz, it felt cosy and warm. Book 2 sees the continuation of this style, and once again I was transported into the walls of Buckkeep, where I could practically feel the heat from the fires in the hearths, and taste one of the ever-delicious meals prepared by Cook (I’m gunning for some of the meat she hangs from skewers!)

Whilst this book still had the comforting elements I felt from its predecessor, the tone took a very dark turn and I finally felt the emotional turmoil I had been warned about by other readers. Of course I won’t give away any spoilers, but early on in the story were 2 consecutive chapters, the first had me rejoicing, it was quite frankly one of the most beautiful chapters I have ever read in fantasy, however it was immediately followed by a savagely brutal scene that had tears rolling down my cheeks.

This darker tone was unexpected, but as our story is narrated by Fitz it seemed a fitting reflection of his life as he changes from a young boy into a young man, particularly given the traumas he endured in book 1.

I thought the characterisation of Fitz was once again, excellent. Despite being involved in political scheming, riding to battles, and advising his Queen, Fitz is still only a teenager, and you could really feel the teen angst we should expect for one of his age: he makes rash decisions, has a temper, and is frustratingly awkward and clueless when it comes to girls!

I could write an essay alone on Hobb’s characters because I think they are fantastically done. Burrich is an absolute favourite of mine since book 1 and I particularly enjoyed some of the chapters he shared with Fitz. I also want to give an honourable mention to Nighteyes – I’m struggling to find the words to describe how I felt reading his chapters, so I’m gonna go on a whim and say – remember in The Neverending Story, when Sebastian is being bullied and can’t escape, then he finally finds the cosy attic? Well Nighteyes is the cosy attic.

I’ve knocked 1 mark off my scoring of this for the plot. Don’t get me wrong, I loved it, but after reading this I can’t help but feel this is a bridging book between books 1 and 3. It was so heavily focussed on political scheming that on occasion I wished we could spend more time adventuring, or in a battle. I wouldn’t describe the story as slow, but sometimes I felt areas were skimmed and we were quickly back within the confines of Buckkeep nervously anticipating Regal’s next move – on the plus side Hobb did an excellent job of making us feel Fitz and Kettricken’s claustrophobia!

I didn’t quite get the satisfaction I was hoping for when I completed the book. I appreciate there is another book but it almost felt like it was left on a *dot dot dot*.

Overall I loved this story, her writing is unlike anything I’ve ever read in fantasy (I actually get Wuthering Heights, on the Moor vibes when reading it, but maybe that’s just me!?). Make no mistake this is most definitely a character-driven plot, but with characters like these, you’ll feel like you are visiting family.

I’d love to know if you are also at the beginning of your Hobb journey and how your experience is going, so feel free to connect with me on Instagram! I can’t wait to dive into book 3 as I’m really not sure how it will unfold, but I need to see that justice is served!