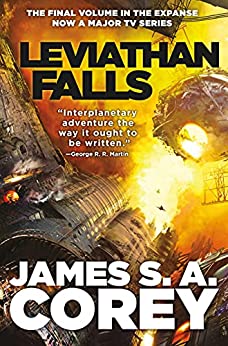 The Laconian Empire has fallen, setting the thirteen hundred solar systems free from the rule of Winston Duarte. But the ancient enemy that killed the gate builders is awake, and the war against our universe has begun again.

In the dead system of Adro, Elvi Okoye leads a desperate scientific mission to understand what the gate builders were and what destroyed them, even if it means compromising herself and the half-alien children who bear the weight of her investigation. Through the wide-flung systems of humanity, Colonel Aliana Tanaka hunts for Duarte’s missing daughter. . . and the shattered emperor himself. And on the Rocinante, James Holden and his crew struggle to build a future for humanity out of the shards and ruins of all that has come before.

As nearly unimaginable forces prepare to annihilate all human life, Holden and a group of unlikely allies discover a last, desperate chance to unite all of humanity, with the promise of a vast galactic civilization free from wars, factions, lies, and secrets if they win.

But the price of victory may be worse than the cost of defeat.

Mixed feelings on this one. Felt I got a good closure, but not really a satisfying read.

The book takes off smoothly from where Tiamat’s Wrath left off. The Laconian empire is reeling from setbacks at multiple fronts. Admiral Trejo fights a desperate battle not just to salvage the Empire, but also to to solve the mysterious path of it’s leader Winston Duarte. In the meantime, James Holden and the crew of Rocinante are also trying to decipher the secrets of the protomolecule, the history of the Ring Builders and the enigmatic unknown threat that wiped them out completely and save humanity from following the same path to extinction. The use of the rings have reached a critical point as our universe begins to experience events scaling from minor unexplained occurrences ramping all the way up to system wide catastrophes which raises the stakes nicely leading to the climax.

The previous books focused predominantly on the military/political conflicts of known Human civilization set amidst the backdrop of mysteries of alien civilizations. We’ve had variations of Earth vs Mars vs Belters vs Laconian Empire as each tried to utilize the protomolecule to their advantage without realizing the darker and sinister side effects. This book being the finale, delves right into the mysteries that we were only provided snippets of in previous books. But rather than jump into the mysteries, the plot unfolds through the view of the human players in the game. We get a LOT of moments of introspection by various people, focusing on the psychological and emotional trauma of the recent events, the tolls of constant turmoil showing on the lead characters. Beset with betrayals and beginnings of new and shaky alliances, the players come to a face off against the mysteries of the past as their own future looks bleak. The threads of previous books are tied off comprehensively leaving the fate of the empire and humanity itself changed and heading into a new and unknown future. A epic well concluded!

Despite the well structured finale, the book isn’t really without flaws:
– The mechanic of moving the plot through the views of the players drags the pace down hugely. The plot only really takes off at about 25% and then the events get constantly interrupted as the books cuts back for the backstories, introspections and emotional content of the characters, which I found frustrating. Between the scientific explanations and emotional content, the plot itself becomes secondary plodding at a glacial pace culminating in a quick and momentous climax. Felt like 80% of the book just sets up the scene and actual plot progress and conclusion happened only in last 20%.
– After having spent the previous books in the arc setting up Duarte as the chief antagonist, we rarely get to see him in the book. Instead a new player, Colonel Aliana Tanaka is introduced. The book then takes a bit of time to set her up and flesh her out as a character, which again added to the drag. Due to having to compress a character to a single book, Tanaka never really worked for me. Her character felt shoehorned and never really fit in, which only emphasizes the underutilization of Duarte.
– The scientific explanations of the mysteries felt like the plot unveils in a classroom rather than in a universe hanging on the balance. Rather than the threads merging into the flow, they just feel overlaid just to provide a explanation.

What could have been a more brilliant conclusion is let down to odd storytelling, uneven pace and non optimal use of characters.

Overall, despite the flaws of this book, it certainly did deliver a neat conclusion. Overall, it was a great pleasure to have read this series, which I consider one of the best sci-fi of all time!