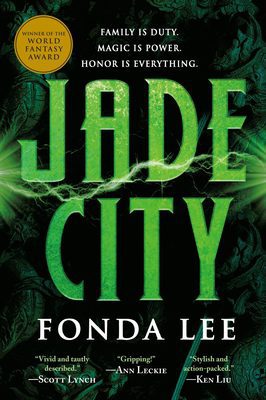 The Kaul family is one of two crime syndicates that control the island of Kekon. It’s the only place in the world that produces rare magical jade, which grants those with the right training and heritage superhuman abilities.

The Green Bone clans of honorable jade-wearing warriors once protected the island from foreign invasion–but nowadays, in a bustling post-war metropolis full of fast cars and foreign money, Green Bone families like the Kauls are primarily involved in commerce, construction, and the everyday upkeep of the districts under their protection.

When the simmering tension between the Kauls and their greatest rivals erupts into open violence in the streets, the outcome of this clan war will determine the fate of all Green Bones and the future of Kekon itself.

I’m very late to the party on this one, but I still want to put my two cents out there in case anyone still needs convincing. I am not typically a fan of urban fantasy stories, which is why I was hesitant to pick this up, but it is an incredible story and if you haven’t read it yet, I highly encourage you to do so.

Firstly, the prose reads so smoothly and if you choose the audiobook route, the narrator does an incredible job with the words that Fonda Lee has graced us all with. Each POV narration felt distinct enough that I never had any issues losing track of who was speaking.

The characters are diverse and nuanced and detailed. Each POV character is developed thoroughly and their motivations, hopes and dreams shine through. There are four main POV characters: each of the Kaul siblings as well as their adopted sibling, Anden. Each of them have very different personalities and histories. I also loved the sibling dynamics between them all.

The world-building details were so unique, the hierarchy system in particular is outside of any typical Roman/European influences; the head of the clan is known as the Pillar, then the leader of the fighting arm of the clan is the Horn and the leader of the business arm is the Weatherman. The Horn and the Weatherman answer directly to the Pillar but have their own people who report to them known as Fists and Fingers or Luck-bringers, respectively. There are also clan supporters called Lantern Men who pay tribute to the clans and run their businesses in clan territory. Kekon is divided into factions between the warring clans, hence the godfather-esque comparisons.

The setting is vibrant and enough removed from any direct comparisons in our world that it doesn’t feel too much like what I’d typically expect from urban fantasy. When someone tells me a book is urban fantasy, I usually expect series like Twilight (Forks, WA), or Desden Files (Chicago, IL) which both take place directly in our world and therefore don’t need to spend a whole lot of time world-building. Kekon has enough asian-inspired influences to ground readers in the familiar while simultaneously enough differences that world-building details are still added in.

Overall, Jade City is an incredible start to an urban fantasy trilogy and I cannot wait to see where the rest of the trilogy goes.