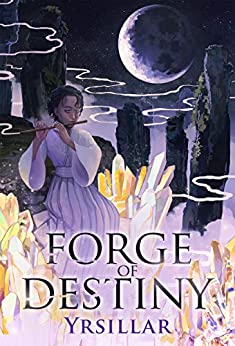 In the Celestial Empire, a land ruled by Immortals and stalked by Spirits and Beasts, a young girl from the slums of an unimportant city is found to have the Talent that may allow her to become an Immortal herself.

Sent to the storied Argent Peak Sect to harness her talent, she must work desperately to catch up to peers who have been preparing to walk the Way for years. The Sect grants new students only three months to prepare and grow before the true challenges begin and the disciples are freed to battle each other for resources and strength.
Contending with tests, strange teachers, unfriendly peers and her own ignorance, Ling Qi must not only defeat many obstacles, but find those willing to stand at her side when the truce ends.
Can she learn to not only survive, but thrive on that journey?

Inspired by ancient folklore, modern martial arts and Xianxia, this fantasy novel offers a mixture of life and action while developing a world both fantastic in setting yet familiar in the humanity of its inhabitants

Note: This review is based off the web serial in RoyalRoad.com. The eBook is now available on Amazon (link below cover picture)

I picked this offhand based on a list I saw in a website and boy, did it surprise me!

This is a Xianxia (which kinda translates into Immortal Heroes) book set in Ancient China, where certain people can cultivate (develop by training) their Qi (loosely defined as life force) using martial arts techniques gaining superhuman powers, abilities and extended lifespan. These people are called Immortals (they may not be immortal now, but will be at the end of their path) and they are gathered and trained by various sects which serve as school/training academies. The more promising students can join influential clans and families and become powerful movers and shakers of the society.

Linq Qi is a teen thief in a small city who has been identified to have the talent to Cultivate her Qi, so she’s plucked out of her life and into a sect to develop her abilities. The book follows her trials and tribulations as she trains and develops not just her martial arts poweress, but also her ability to navigate the complex socio-political environment as her growing powers thrusts her into circles gaining attention of powerful people.

The earliest section of the book focuses on the school/academy progression arc as being a nobody, Linq Qi is an object of derision from her fellow students from noble houses, which quickly turns into jealousy as her talent starts outstripping them all. From the get go, we are introduced into the complex socio-political environment as the Sect itself is a microcosm of the wider geopolitics of the nation. We have scions of various political houses maneuvering and politicking as they try to showcase their skills and abilities in the sect to their watching parents and seniors and gain their respect. It’s a cut throat world, where power and abilities rule with filial or family relationships play a secondary role. The politics in the sect is as cut throat as the world outside and the complex threads of relationships, relative levels of importance, the politicking are all packed into a superbly written arc.

The pacing is good striking a delicate balance between plot progression and worldbuilding. Both the immediate and the wider goals are blended in seamlessly as the book moves away from the training arc and into actual macro events that affect the sect and the students directly with past enemies come forth and new mysteries arise.

I love the character work. The character building is simply phenomenal as we the gradual maturity of the characters, not just the protagonist as they are molded by their experiences in school is done just perfect. every character is unique and their role however big or small is etched so we get to know them individually and personally.

There’s lot of diversity in magic systems too. Not just the traditionally sword and sorcery, but we get to see may varieties that we don’t normally see in mainstream fantasy. The protagonist uses a song/music themed magic which I found very intriguing. Also there’s stuff on Alchemy etc which adds lots of interesting facets to the plot.

Overall, I’ve become a huge fan of the series after having binge read everything available till now (new chapters still being released in RoyalRoad which would become books in future) and would highly recommend this.