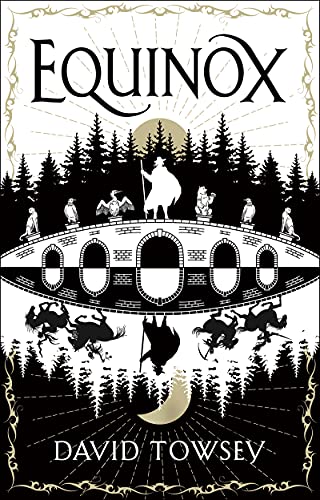 The sword shrivels to flakes of snow.
As evening falls, the city of Esteburg begins to stir. Christophor Morden, one of the king’s special inspectorate, is woken early by a call to the city prison. A heinous crime has been committed and the police suspect supernatural causes.
The law devours its history.
The investigation will take Christophor far from home, to a village on the edge of the Kingdom. There he will discover the signs of an unholy ritual that can only be performed by a witch.
The stone moves on water.
But within Christophor – as within all the citzens of Reikova – is a day brother: Alexsander, a musician who knows nothing of night. And as his night brother nears the truth, Alexsander will find himself determined to halt him.
The broken heart bleeds gold.
And all the while, the witch’s ancient and apocalyptic ritual comes ever closer to completion.

Thank you to Head of Zeus for approving me for an eARC copy of this book. This, of course, does not impact my words in any way.

Hello again dear reader or listener! I hope February has been treating you well and that you’ve had the chance to read some good books. While I’ve been mostly taking part in #FebruarySheWrote held by Benjamin of Literature & Lofi, I also got approved for this book and was so intrigued by it that I decided to read it sooner rather than later. The front cover looks amazing and evokes the premise of the story oh so well and, speaking of, what. A. Premise. Just the idea that there are two people living in one body, but that each can lead a completely different life during the day or night respectively, is so absolutely awesome that I just couldn’t wait to see how Towsey navigated the complexities of such a society. Add to that a witchy mystery and things just become even juicier!

First and foremost then, let me go for some nerdery that was rolling around my head the whole time I was reading this novel. Towsey has created a deeply atmospheric and captivating book that brought together the aging inspector Adamat from McClellan’s Powdermage trilogy, the ambience and eerie feel of the tv series The Alienist, as well as that near constant sense of the uncanny present throughout Neil Gaiman’s the Sandman comics. Talk about a right mix huh? Which is probably also why this was the kind of story that unfolds slowly, and you take your time to read. In fact, while I was always eager to continue, I felt no rush to do so either, savoring instead the ambience and pattern of nothing being quite as it appears. Of every answer actually leading to more questions. Essentially, Towsey created a supernatural/paranormal mystery you dig even though you’re a bit confused as to what is actually going on sometimes. It is a clever way to pull in the reader as they try to make sense of the clues and events but also attempt to differentiate between what is real and/or imagined or perhaps even bewitched.

Moreover, Towsey managed to write up a standalone that delivers enough worldbuilding to give the reader a solid sense of this complex way of life that is led in parallel between day and night in an alternate 18th century, but not so overwhelmingly that it would weigh the overall novel down. In fact, while he does wrap most of the story up by the end, I’ll admit I would’ve enjoyed seeing more of this world and its aspects explained or developed, since most of the plot takes place in the small town Christophor goes to investigate, over a short period of time. Plus I am still a little curious about a couple of loose threads left hanging that, granted, some were more peripheral to the main mystery plotline than others, but still important enough to warrant more attention, I think.

That said, I only have two real qualms with this book. Firstly, as I already mentioned, I was looking forward to the character work that would be born out of such a premise, and to an extent, Towsey definitely delivered. His main conflict and tension very much hinges on the difficulties that come with having two very different people share a body, as we read of the consequences brought on by the investigator Christophor seeking one specific outcome/culprit while his day brother, Alexander, is determined to prove him wrong. But at the same time I felt like this is the kind of novel that stood more steadily on the atmosphere it wanted to create rather than the actual characterization of its protagonists. I could for instance understand some relationships being made etc. but did not see or feel the chemistry behind them as much as I would have liked.

The second thing that didn’t quite land was the pace, although there’s definitely an argument to be made that that was the author’s intention from the get-go, with a deliberate jarring effect, which is also valid. Truly, as I mentioned before, this story was slow paced but not because it wasted words on superficial details, but rather because it took its time to unravel the mystery and create the atmosphere of doubt, tension, and danger that made for an enthralling setting. But then, the concluding events felt sudden and perhaps a little rushed in their hectic sequence that came to somewhat of a skidding halt and then took a couple of final measured steps towards a more poignant ending than what I was expecting. This is not necessarily a truly detracting factor as it does leave room for pondering the story long after you’re done reading it and, if I got to write out my thoughts including spoilers, I might actually make more sense of it all eventually. But ultimately, both of these aspects are what left me with the aforementioned questions, which can be very subjective to be fair. I also have the feeling, that this is a story that would work even better upon a reread, regardless of now knowing the reveal, so I’m still quite curious to see if in a future, when I do go through it again, I will feel differently!

Equinox comes out May 12th 2022 and, if anything I said has piqued your curiosity, you’ll definitely want to dip your toe in this fascinating and occasionally eerie world, dear reader/listener!