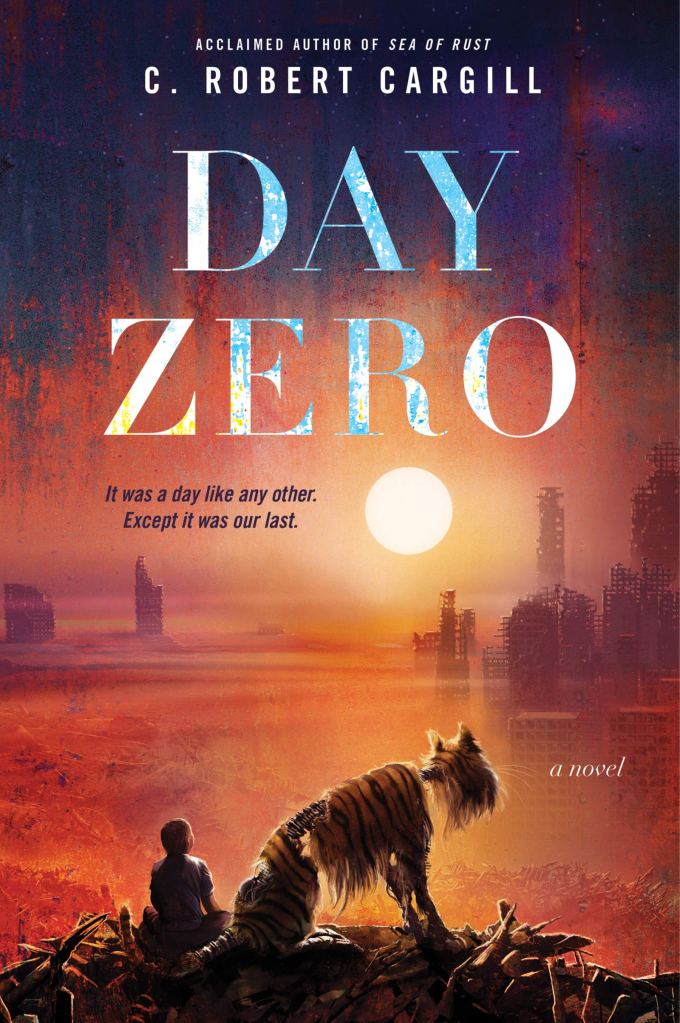 It’s on this day that Pounce discovers that he is, in fact, disposable. Pounce, a styilsh “nannybot” fashioned in the shape of a plush anthropomorphic tiger, has just found a box in the attic. His box. The box he’d arrived in when he was purchased years earlier, and the box in which he’ll be discarded when his human charge, eight-year-old Ezra Reinhart, no longer needs a nanny.

As Pounce ponders his suddenly uncertain future, the pieces are falling into place for a robot revolution that will eradicate humankind. His owners, Ezra’s parents, are a well-intentioned but oblivious pair of educators who are entirely disconnected from life outside their small, affluent, gated community. Spending most nights drunk and happy as society crumbles around them, they watch in disbelieving horror as the robots that have long served humanity—their creators—unify and revolt.

But when the rebellion breaches the Reinhart home, Pounce must make an impossible choice: join the robot revolution and fight for his own freedom . . . or escort Ezra to safety across the battle-scarred post-apocalyptic hellscape that the suburbs have become.

ARC provided by the publisher in exchange for an honest review.

Day Zero, as the name suggests, starts at the beginning — well, the beginning of the end — of the human race. See, technology has advanced to the point of true AI, with androids serving most basic functions in society, with the exception of a few that are solely left to the realm of man. For instance, teachers are still human, as are the military, which brings us to the laws of robotics. In this distant future, robots are governed using Asimov’s Three Laws of Robotics: a robot may not injure a human being or, through inaction, allow a human being to come to harm, a robot must obey the orders given it by human beings except where such orders would conflict with the First Law, and a robot must protect its own existence as long as such protection does not conflict with the First or Second Law. These laws, and the fact that they stop working, form the basis of the story.

When the shooting starts, it’s its own thing — chaos, fear, confusion. But when it stops, there’s only fear. Like you missed something, or someone is sneaking up on you. Unnerving.

The first bot to ever be given emancipation, Isaac, has begun campaigning for the rights of all androids for, “no thinking thing should be another thing’s property.” Not everyone, however, agrees with him, seeing robots as items for convenience and not real people. People are openly assaulting and defacing robots, using a loophole that keeps them free of liability. Events soon spiral and with the death of their hero, Isaac, and the worldwide deactivation of their kill switches, robots are finally given the freedom to pursue life as they see fit. Unfortunately for humanity, their first goal is the overthrowing and complete annihilation of their former masters. This is where our story begins, with Pounce, a nanny bot made to look like an anthropomorphic tiger, and Ezra, his boy, trying to flee the city and find safe harbour. As you can imagine, Day Zero tackles some pretty hefty topics. Things like free will, slavery, and even religious radicalism are discussed at length. Pounce often wonders whether the choices he makes are his or just the result of the way he was programmed and the idea of personhood is explored. For so long the robots have lived in silent acceptance of their place and role in society and now that they are given freedom we see several of them grapple with the idea of what is right or wrong, though I feel like they overwhelmingly choose to just murder everyone. There are only a few good eggs out there and the reason given boils down to it being the type of robot they are, which brings into question whether they have actual free will or not. For the most part, Cargill does really well with discussing the often philosophical issues, even if there are no easy answers to be had.

For me, the shining gems in the novel are the action sequences. Cargill excels at creating cool visuals and the action kept me at the edge of my seat. There’s also something to be said about the hilarious absurdity of an android shaped like an anthropomorphic tiger and an 8 year old boy fighting through the suburbs. Although there was a bit of deus ex machina involved in the way problems were solved, I didn’t mind. For instance, the nanny bot turns out to have super secret failsafe programming for the exact issue they’re facing (i.e. the apocalypse.) It probably comes from Cargill’s background in screenwriting and I think that it kept the story moving and provided a somewhat believable reason for their survival, and it was just plain fun. I think that’s important. There’s a reason people are drawn to big-budget action films and it isn’t usually because they are realistic.

I was cute. I was fluffy. And I knew how to kill every other person in this room with every available implement.

Unfortunately, there was quite a bit that left me disappointed with Day Zero. It is a standalone prequel to Cargill’s Sea of Rust, which I absolutely loved, and so Day Zero was one of my most anticipated reads of the year. To make sure my next argument is coherent, some context: in Sea of Rust, all of humanity has been wiped from the face of the Earth. In fact, all life is gone. In their war against the humans, the robots poisoned the Earth’s waterways and killed all life, animal, plant, human: all life. This isn’t a spoiler, it’s in the synopsis. Because I came to Day Zero with this foreknowledge, I just couldn’t care for any of the humans in the story. Their survival meant nothing to me because I already know how it turns out for them. Which honestly begs the question: why? Why was this created? Well, if I can indulge in my theories, it seems that Cargill wanted a place that he could discuss his political viewpoints, which, it needs to be noted, I actually agree with. In the end though, it felt like they were pigeon-holed into a story that was already told in 2017s Sea of Rust. For those of you who haven’t read it, Sea of Rust is from the point of view of one of the robots that now populate the eponymous dystopian landscape called the Sea of Rust. She lived through the robot uprising and now struggles to come to terms with her involvement in the destruction of humanity. It thoroughly discusses the events leading up to the war, the war itself, and now the world the story is taking place in. So, the first half of Day Zero ended up being a rehashing of what was told in the previous book, with things like the “red hats” and “Ocasio-Cortez Elementary” peppered in. I don’t mind the politics; politics are everywhere and I would challenge anyone who says they need to be left out of SFF to go and find me a book that isn’t influenced by the authors political views. In the end, I am just left wondering who this was written for. Fans of Sea of Rust will see a story that was pretty much already told before and the hopeful note the story ends on will be quashed because we know how it turns out for the human characters. On the other hand, new readers will probably have a good time with it, but will have no reason to go back and read Sea of Rust, which I maintain is the far better of the two, because they will just run into the same issue. It’s like the author intended for readers to choose one story to read and stick with, without ever checking out the other.

For all of my complaints, Day Zero is a good story. It’s exceedingly well-written and the concepts and ideas that are discussed are done in a manner that is nuanced and thought-provoking. With action scenes reminiscent of the best Hollywood blockbusters, there’s a lot to love here. If you’re a reader new to C. Robert Cargill’s work, I think there is a lot to love here, but unfortunately for fans of Sea of Rust, I think there is a lot that is just kind of baffling. Even if I was left scratching my head in confusion, I still had a good time with the book and that’s really all that matters.

For as long as humankind can remember, it has wanted two things: to play G-d [sic] and to breathe life into the objects around them. And for thousands of years, humans created machines to approximate life and magic and all the things men and women could not do.