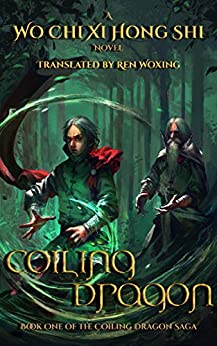 Raised in the small town of Wushan, Linley is a scion of the Baruch clan, the clan of the once-legendary Dragonblood Warriors. Their fame once shook the world, but the clan is now so decrepit that even the heirlooms of the clan have been sold off. Their prospects seem dire… and yet, perhaps some power still remains within the veins of the clan. Dragons do not easily die, and neither do the dragonblooded.

Come witness a new legend in the making. The legend of Linley Baruch.

A highly divisive series that forced me to get over many of my peeves, but one that was worth it all! I simply loved this!

This is a translated novel, and so comes with a heavy baggage of peeves that struck me quite hard when I started this series. Though the translation captures the content well, it does not flow smoothly in English. The dialogue is stilted and often the emotions behind the dialogue wasn’t translated. So at times, I was unsure on whether the dialogue was spoken in anger or respect or sarcasm. In many occasions, it felt very abrupt both at the start and at the end of the dialogue making it hard to establish a confluence between the dialogue, the context and the prose. I believe the cause is that the translation is more literal rather than qualitative.

Then we have the modern westernization that permeates the prose which does not gel well with the Chinese themed setting. You get characters named Brad and Dillon fighting over the town of Wushan, the mix of Chinese customs with modern swear words (“you can all f*ck off” and people calling each other “bros”) creating a very dissonant world building that neither captures the majesty of ancient China nor the modernity of current civilization. It’s made for a very uncoordinated and awkward read, that I personally found it hard to get over with.

Here’s why I highly recommend you turn your peeve filter off and get past the above:

It’s Progression Fantasy at it’s finest! If you love a overpowered MC who starts off as underdog and smashes his way to the peak in a very Goku (Dragonball Z) kind of way, this should me a must read. The progression is literally non-stop and to capture a phrase from the book itself, when you climb a mountain all you see are higher mountains. I simply have not read a book that has so many vertical and horizontal levels of progressions as this. Every time, I see a peak climbed, a level attained and expect the book the taper off, it threw me into a loop and kept my expectations completely smashed as the progression continued full steam!

The book is quite epic in scope, in cast and in progression. The worldbuilding just keeps expanding and more and more powerful casts kept appearing all through 8 books till the last great finale, which let me completely pleased. Considering the sweeping scope, it was near impossible to maintain a flow of character development for supporting cast and it does show in the series, but overall a admirable job in keeping them together. The main cast is more or less constant through the books making it a easy read to follow through the progression.

The timeline progression takes some getting used to. The progression happens over millions of years or so. For example, You can get instances of MC meditating for a couple of centuries before making a breakthrough. It really forced me to reassess my preconceptions on timeline progression as most of the characters are near immortal. A very unique concept that I loved (after taking some time to get used to it)

The magic system and power progression is solid. The transition in power up is smooth and the power progression blends in smoothly with the character progression. There is a structure to the plot progress that we see happen cyclically, but the world and setting change keeps things fresh all through. New world, new monsters, new people, new magics, yet the underlying consistency is maintained making it one progression novel rather than a set of staggered books.

The MC has a lot of plot armor all through. He gets the right breaks, gets lucky at the right instances, people turn up giving him what he needs at the right occasions etc. For many, this would be a turn down, but I loved it because it was a happy fun read. There enough plot tension to keep you turning the pages, but we soon realize this would be a Happily Ever After book rather than one that drags you through moral grey traumatizing events.

To conclude, it’s a flawed book, but one which bought out the simply joy of power progression in me. Has shades Dragonball Z and Hunter x Hunter running through which I thoroughly loved.

I hope you pick this up, get past the flaws and enjoy yourself!