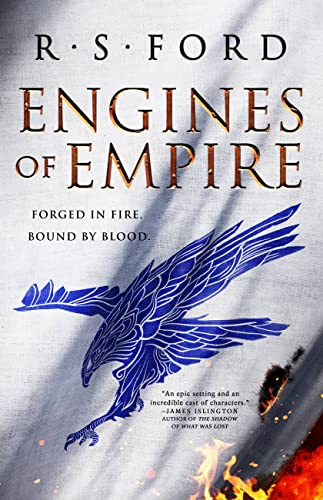 The nation of Torwyn is run on the power of industry, and industry is run by the Guilds. Chief among them are the Hawkspurs, whose responsibility it is to keep the gears of the empire turning. That’s exactly why matriarch Rosomon Hawkspur sends each of her heirs to the far reaches of the nation.

Conall, the eldest son, is sent to the distant frontier to earn his stripes in the military. It is here that he faces a threat he could have never seen coming: the first rumblings of revolution.

Tyreta is a sorceress with the ability to channel the power of pyrestone, the magical resource that fuels the empire’s machines. She is sent to the mines to learn more about how pyrsetone is harvested – but instead, she finds the dark horrors of industry that the empire would prefer to keep hidden.

The youngest, Fulren, is a talented artificer and finds himself acting as a guide to a mysterious foreign emissary. Soon after, he is framed for a crime he never committed. A crime that could start a war.

As the Hawkspurs grapple with the many threats that face the nation within and without, they must finally prove themselves worthy–or their empire will fall apart.

The world that Ford built immediately sucked me in. I’m a fan of political intrigue so I was delighted to see the backstabbing and maneuvers started almost immediately. I felt like I was pleasantly strolling through the book and then it all exploded within a blink of an eye. Every character in the book is thrown into a different sort of mayhem and it was anxiety inducing, but pleasurable, to watch them work through that mayhem.

The book was only enhanced by the audiobook. I loved that with the wide range of POV characters, we had a full cast of narrators. This helped to differentiate tone and personalities of each character. I love books with multiple POVs, I think it adds to the overall experience and keeps books flowing. The only downfall is usually some of the effect of that gets lost with one narrator, so I think it was an excellent decision to do a full cast. Well done to Alison Campbell, Ciaran Saward, Phoebe McIntosh, Ewan Goddard, Andrew Kingston, Martin Reeve, and Stephen Perring. Each delivered a superb but unique performance that made this novel easy to listen to.

Engines of Empire was a constant whirlwind of adventure and mishaps. Some of our characters are learning about themselves along the way and some of them are losing themselves a bit. My favorite is the brainy and kind Fulren, and to say that he goes through a transformation is understating it. Tyreta is also forced to harden up from the privileged life she is used to which leads to important revelations that help to fuel the plot. Conall seems to have lived the least sheltered life and his character develops in an interesting way. All of these siblings have their own path and you can slowly see how their paths are going affect one another.

Ford builds a world that feels natural even though it is very unique. Majestic airships, diverse groups of people, and intriguing magic systems all add to the rich atmosphere he is weaving. By the end of the book, we have a good sense of the world but it also feels like we still have so much to learn. That’s not a bad thing, though! I like unwrapping the mysteries of new worlds over time.

Engines of Empire was a gorgeous first installment in The Age of Uprising series!