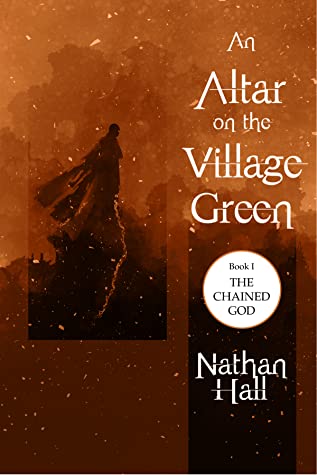 My faith called me to become a Lance. My compassion drew me into one of the fallen lands. Through my connection with the Chained God, I alone can find and destroy the Horror that stains the land.

Death can no longer chain me.

But I couldn’t have imagined the madness waiting for me in this village. I’m not sure my faith can withstand the secrets I’ll uncover. Or that my compassion can survive the violence to come. This Horror may swallow me whole.

Death can no longer free me.

A creature stalks in the dark. Buildings burn. People die. An altar has been built on the village green.

An Altar on the Village Green is a story of horrors. Hall’s use of time loops set within a punishing landscape immerses you within the madness, seeping into your consciousness, leaving you completely unaware of how redefining it all is until you’ve breached the surface back to reality.

There was a general unease that came over me during my time with An Altar on the Village Green. After finishing, I felt as if a veil had been lifted, lightening my soul. I think this can be attributed to the cyclical narrative that proved unnerving. I finished a month ago yet this story has settled inside my bones, and I never go a day without thinking about it. I love stories that echo around long after finishing. To put to rest any doubt on how much I loved this book, let me put it this way– this was one of the most immersive books I’ve read in the last decade. Reading this felt like unlocking a new level into the exploration of hope, compassion, and accepting your losses.

Hall captures your interest immediately, promising a story that will dance both inside and outside any boundaries you’ve established. As this is inspired by the Dark Souls game, there are elements that are fulfilled such as a dark and bleak fantasy setting, grim tone, incomprehensible monsters, re-spawning near a checkpoint marker, healing potions, clearing and resetting of an area, and the final boss. There are Horrors eating their way throughout the world, creating fallen, plague infested lands that spread outward from its source. A Church’s god offers freedom from Horror through the strength of a Lance tasked with freeing fallen lands. These Horrors are grotesque, sometimes human-like incomprehensible beings.

When a Lance dies, they experience a vision before becoming reborn at an Anchor. I loved how the Anchor was so much more than just a place to begin again. Across each cycle of death, vision, and rebirth, the Lance slowly begins to become redefined. I think An Altar on the Village Green should be enjoyed slowly. Each cycle was made up of its own vignette of moments and impressions that would help the Lance grow in ability and strategy. The intention behind pacing throughout the story was impressive and clearly a deliberate choice on the authors end because the world building and plot required a slow build up that could not be rushed. Hall’s decision to tell the story this way mirrored what the Lance was feeling– an endless, never-ending cycle of failure, torment, and questioning. The theme of compassion was a steady thrum, providing an anchor for hope to remain.

“How many waves could assault a beach before the water found an unrecognizable shore?”

It was a little jarring going through the first cycle or two with the visions, but the repetitive nature set up an expectation that avoided any further confusion. A clearer picture of the world (though subtle) is realized through sparse dialogue with the village folk and from visions showing the different Horrors devouring other lands and the different ways in which each Horror could be defeated. I loved that the dialogue flowed naturally, creating a sense of immediacy within all interactions. The action and fight scenes were generally clear to follow along with although a few scenes lost me as I wasn’t clear on how the characters got from one place to another. It didn’t take me out of the story– I just had to go back and re-read the lines again.

I found myself softening towards the village and caring for their fate over time. It was heart wrenching as the reader knowing that they have been trapped in this Horror. By the end they began to feel like they could’ve been my very own neighbors, although not the sort I’d want if a near-apocalypse was occurring. I also thought it interesting that every character except for the Lance was named.

“Desperation could wear the skin of faith, but it never fit well.”

There is more to this world and I can see many opportunities to continue expanding on the ideas from this book. I am left with some questions that I anticipate will be answered in time. An Altar on the Village Green is an entry in the current SPFBO8 (Self Published Fantasy Blog-Off) contest run by Mark Lawrence so I’m linking the page here in case you want to follow along with the contest. It’s the eighth year it’s been running and it’s a great place to discover new self-pub authors in a variety of fantasy sub-genres. I also have to give a shout out to the cover designer— Luke Tarzian.