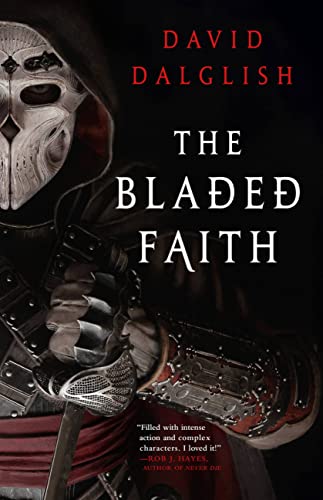 What do you get when you smash together massive anime set pieces, Final Fantasy summons and the eclectic mix of characters that can be found in any of the best JRPGs? You get The Bladed Faith, a pulse-pounding action romp with a main party of likeable, well rounded and varied rebel rapscallions.

The Bladed Faith starts with Cyrus, Prince of the island nation of Thanet, witnessing the swift and brutal takeover of his kingdom. We then follow him as he is taken in by a rebel group who wish to make him a legend known only as The Vagrant. And David Dalglish does not wait around before getting to the exciting part! For a just over 500 page novel, this clips along at a speedy pace. The prose is easy to gel with, no overbearing descriptions of coat buttons or anything of the like to be found here (tee-hee). The book is filled with great emotional character driven moments and crazily well put together action set pieces which, considering I’ve heard David say it’s the bigger battles that are his least favourite to write, they are very thrilling indeed!

However, this fast pace is, in my opinion, a slight detriment to the beginning 150 pages of the book. David knows where the bulk and the main emotional impact of the story is going to take place within the timeline of this novel and so doesn’t spend a lot of time mulling over the foundational steps. You get exactly what is needed and that’s it before moving on. Essentially, the first third of the story contains a number of time skips in the narrative, and personally I would have liked to have either had more steps on this part of the journey, or have had spent more time at each step. I like to sit with the characters for a time and get to know them a bit better, and jumping from one point to another after a brief character moment meant I only got to know them a tad before the bigger plot elements came out to play. This is however more than rectified in the remaining two thirds, which is chock full of character development, with not one moment wasted in furthering the main casts separate arcs.

What Dalglish does brilliantly is meld all his action scenes with his character development. He does this in a way which reminds me of anime (for context I am not much of an anime guy, by that I mean I haven’t really experienced it) as the characters have a lot of back and forth dialogue during fights, whether it be banter between party members or verbal warfare against a foe or even internal realisations mid-fight. It reminds of Goku & Vegeta, or Goku & Cell, or Goku & Frieza (my anime knowledge is strictly limited to 90’s Dragon Ball, I am sure more experience anime fans can find a better comparison!)  Every time a characters arc or development can be furthered in a fight/battle or in the aftermath of one, Dalglish latches to it and hits it a homerun each time.

But the story is more than just sword-swinging, guerrilla warfare badassery, it is also about loss & redemption, about knowing the price it takes for freedom and being willing to pay for it. It’s about putting yourself on the line for something bigger than you and accepting that, along the way, others you care about will be on that line too. It’s about found family, friends, and loving those that are true to themselves. Ultimately, it is a story about freedom, whether it be freedom of the self, or from a tyrannical empire ran by an immortal God and policed by mega armour wearing, oversized sword wielding soldiers and controlled by maniacally devout magic spewing priests, which is something we can all relate to!

The Bladed Faith is, without a doubt, a whole lot of fun. You can fly through this novel and along the way you’ll experience some over the top action (in a good way), anime-style character driven melodrama (also in a good way) and a varied cast of characters with plenty of representation on all fronts. I recommend this book to everyone, however I whole heartedly believe it is essential for lovers of anime and the golden age of Square JRPGs (especially Final Fantasy Tactics & XII*). I can’t wait to see where David takes us next, especially seeing as he has said on record that Book 2 is the best book he’s ever written!

*Final Fantasy XII is incredible and The Zodiac Age re-release on PS4 is genuinely one of the best games of the last generation. Hit me up if you want to talk Final Fantasy!