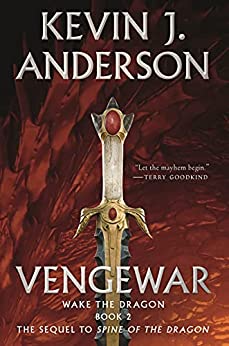 Kevin J. Anderson’s sequel to Spine of The Dragon brings bitter rivalry and blood feud—that might be the downfall of the human kingdoms.

Two continents at war, the Three Kingdoms and Ishara, have been in conflict for a thousand years. But when an outside threat arises—the reawakening of a powerful ancient race that wants to remake the world—the two warring nations must somehow set aside generations of hatred to form an alliance against a far more deadly enemy. Book One awakened the great dragon, and set the kingdoms at each other’s throats.

In Book Two, Vengewar, the Three Kingdoms are shattering under pressure from an inexperienced new King who is being led by an ambitious regent to ignore the threat of the Wreths, in favor of a Vengewar with Ishara. His brother and uncle can see only the danger of the Older Race.

In Ishara, the queen lies in a coma, while an ambitious priest seizes power. But he has neither the training nor the talent to rule a nation— or even a city. Ishara is in deadly peril, and the Wreths have not even appeared on their continent.

Vengewar is the second release in Kevin J. Anderson’s Wake the Dragon series, a story for which I had high hopes coming in. If you read my review of book 1 (if you have not, you can do so here), you know that I was disappointed but ultimately decided the series had enough potential to continue with it. I am mostly happy about that decision, as I did enjoy book 2 more and the setup going into book 3 is very intriguing.

My biggest challenge with the first book was pacing. Everything was very dense and explain-y that I struggled getting through it. It was slow, and there was not enough intrigue creating by the plot. The narrative started in one place and was basically a plateau throughout most of the book.

Vengewar is similar in style, though I did think the pacing was improved by the advancement of a few big events that created some short-term drama while increasing long-term suspense. There were some decent action sequences, as well as incidents that spark movement in character arcs, which I thought had really come to a standstill and were being rehashed for a bit. Because of those aspects, I definitely did not feel quite as muddled down as I did reading the first book.

This being my first Kevin J. Anderson book, and after Spine of the Dragon I thought the issue might be that sometimes first books in series can sometimes get stuck in a rut with trying to set up characters, plot, setting, etc; but, the more I think on that fact the more I come to the realization that maybe it is just that the author’s writing style is not for me: relying the long game and getting deep into the details. Do not get me wrong, I enjoy both of these writing strategies, as long there are climactic events along the way. For me, that is the aspect this series has been missing. If you like that writing style, this series is probably exactly what you are looking for.

All in all, I did like Vengewar more than Spine of the Dragon. The pacing is improved, and I like the progress of some of the character arcs. I am going to go ahead and finish the Wake the Dragon series by reading God and Dragons next. I want to see how it all turns out.