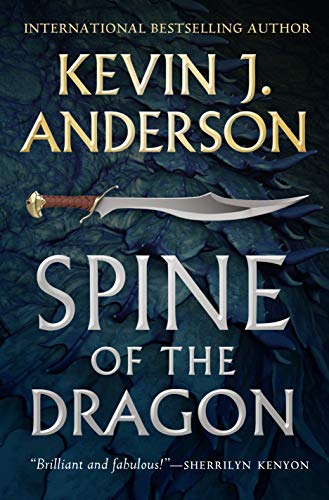 Two continents at war, the Three Kingdoms and Ishara, are divided by past bloodshed. When an outside threat arises—the reawakening of a powerful ancient race that wants to remake the world—the two warring nations must somehow set aside generational hatreds and form an alliance to fight their true enemy.

Spine of the Dragon is the first release in Kevin J. Anderson’s Wake the Dragon series. I was really excited going in to this book, as the synopsis mentions many of the aspects I love about fantasy novels: ancient gods, big battles, and dragons. Unfortunately, though, it missed the mark for me.

I spent much of this book muddling through the narrative, because I had trouble getting into it. For me, that was due to the slow pacing. I mean, really slow pacing. There was just so much explanation. I do not mind that, as long as there are ebbs and flows to keep things interesting. Alas, that did not happen, here, and I was mostly bored. We know early on what the main conflict is, and the characters all work toward that end; but, I like having mini-conflicts along the way to build suspense, and I did not get that with this book.

Normally, I would not continue with this series, but there is enough potential to bring me back. The plot is composed of different combinations of potential engagements. gods vs gods. Gods vs humans. Humans vs humans. And, potentially, gods and human vs dragons? I really do want to see how all of these machinations play out over the series, so I do plan to carry on with it.

This is my first Anderson book, and this is what I think the author is known for: creating these deep, rich worlds with a ton of political intrigue and letting things move along at a snail’s pace. Some people really like that, which explains why the author is so popular. If you are one of those people then you will want to read Spine of the Dragon.

Unfortunately, it just did not hit the right notes with me. Due to the intriguing aspects of the narrative, I am looking forward to book 2, though, and hoping it combines with a rhythm more to my liking.