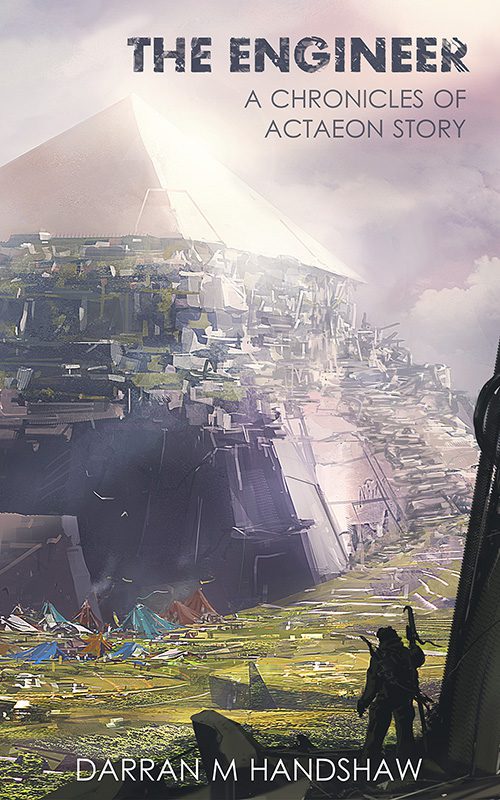 “We are born in the shadow of fading memories and fallen dreams, living our days within the decaying bones of an age long gone.”

When the Engineer, Actaeon, arrives at Pyramid in the heart of Redemption, nothing goes according to plan. Mysterious raiders pursue him relentlessly across the shattered remains of the ancient metropolis, and the leaders of his homeland pay no heed to his ambitious ideas. Meanwhile, deep beneath Pyramid, a deadly creature stirs. And, when Actaeon meets a skilled young Knight Arbiter with brilliant blue eyes, he starts down a path he could never have imagined.

The vast, fallen city of the Ancients is home to a new people who face the constant struggle to find resources needed to survive in the dangerous ruins. For the Engineer, however, Redemption is a treasure trove of technology, opportunity, and answers. But his unique skills make him a target for those who would use his talents to achieve their own dreams of power and control.

In his endless quest for the truth, will Actaeon discover the fallen city’s greatest secrets? Or will he share the same fate as the Ancients of whom nothing remains but a whisper?

One thing is certain: in Redemption, everything comes with a cost.

Imagine if Macgyver was crossed with Einstein and then placed in a post apocalyptic world hundreds or thousands of years after civilization collapsed, with horrifying creatures and strange technology that no one in the present day really understands. The Engineer would be that individuals story. Darran Handshaw has created a fascinating world that is filled with mystery and excitement as his unique cast of characters explore to understand the mysteries of the past and solve the problems of the present.

“My accomplishments could be anyone’s accomplishments if they only put their minds and hearts to it. To question the intricacies of our world instead of blindly accepting them. To try to see things differently than our preconceptions demand. To have the courage to try and fail and try and fail again and again, until a solution is revealed. Every man, every woman, has this ability within them if only they choose to accept it.”

What I loved about The Engineer was the world that Darran created. I’ve always been a fan of post apocalyptic stories, whether in a book or a movie, and I found this one super interesting. The fact that the ancient civilization was so advanced that some of the technology still functions in the present world made for really interesting human dynamics in things such as politics, religion, economy, and a lot more. Also as I read, the imagery of the hills of ancient debris from the super advanced city filled with hidden technological treasures made for many unexpected situations and twists that I just loved. All that to say, the world building in this story is incredible with a heathy amount of mystery to it that really keeps you intrigued throughout.

Outside of the world building this is definitely a character driven story. It was easy to know who was talking just based on that individuals personality and speech patterns. Every character was unique and stood out in their own ways. As mentioned in the synopsis the main character is Actaeon who is a genius that can take anything and turn it into something useful to solve any kind of problem. Maybe most importantly though is the beautiful love story that progresses throughout the book between the adventures and problems that arise. My favorite characters however are his two ‘assistants’ who I can guarantee you’ll fall in love with as well due to their humor and many exciting fight scenes that their involved in.

There were many main themes in The Engineer in my opinion. To name a few here are some that I found the most interesting. Where is the line, if there is a line, between technological progress and taking it to far? No amount of technological advancement can completely solve the problems of humanity due to man’s nature and desire for power, which I believe can be seen in the wreckage of the age before. The opportunity for love to be found is always a possibility for anyone. Trust can’t be given freely just because someone is family or trusted by others, rather, trust must be earned. Finally, every man should strive to help improve the world. Not for the worlds sake but for the sake of those who live in it. These were what stood out to me the most and I think you’ll really enjoy seeing them play out!

“When strong men strive to manipulate the weak and oppress them through nefarious means, how can any of us turn our backs entirely to the sort of suffering that will inevitably cause?”

My only more negative comments would be that, first, I think the story could have been a little shorter. I found myself in several instances experiencing a little deja vu as conversations about similar things happened multiple times. Also, while I enjoyed many of the inventions and problem solving there might have been a few to many overall. For example there is a lot of time spent on a creature in the story that is never ultimately solved by the end which left me a little disappointed. Second, which kind of follows the idea of my first point is that I felt like many of the conversations were a little long winded and could have been shorter. Not that all conversations have to be short but it felt like there was a lot of dialogue, especially between Actaeon and his love interest. I can’t think of anything else other than that which caught my attention while I read!

With a book as large and epic as The Engineer it’s hard to really sum up everything I loved about this story, but just know that it’s certainly worth the read. Darran has managed to tell a story that teaches us that when the present looks bleak, all that’s needed is people working together and putting their minds and hearts to it for their future to be much brighter.

I need to end by also saying thank you to Escapist Tours for allowing me to be a part of this book tour and most importantly Darran Handshaw for crafting such a wonderful story.