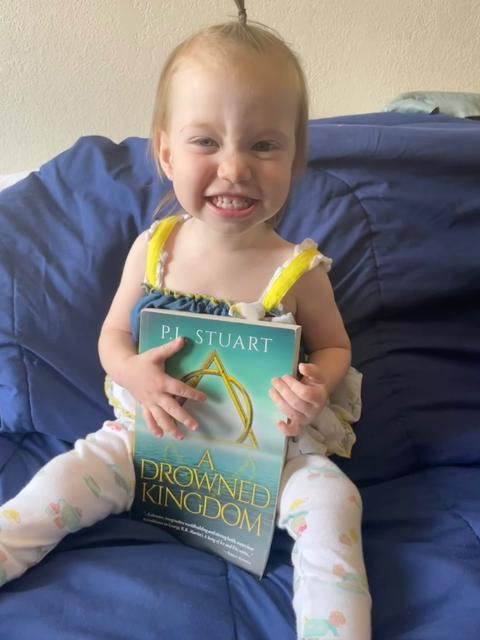 Once Second Prince of the mightiest kingdom in the known world, Othrun now leads the last survivors of his exiled people into an uncertain future far across the Shimmering Sea from their ancestral home, now lost beneath the waves. With his Single God binding his knights to chivalric oaths, intent on wiping out idolatry and pagan worship, they will have to carve out a new kingdom on this mysterious continent―a continent that has for centuries been ravaged by warlords competing for supremacy and mages channeling the mystic powers of the elements―and unite the continent under godly rule.

With a troubled past, a cursed sword, and a mysterious spirit guiding him, Othrun means to be that ruler, and conquer all. But with kingdoms fated on the edge of spears, alliances and pagan magic, betrayal, doubt, and dangers await him at every turn. Othrun will be forced to confront the truths of all he believes in on his journey to become a king, and a legend.

When one kingdom drowns, a new one must rise in its place. So begins the saga of that kingdom, and the man who would rule it all. ​

A special thank you to P.L. Stuart for sending me a review copy and Escapist Book Tours for putting this whole thing together. All thoughts and opinions are honest and my own.

If you read fantasy, there’s a really good chance you’ve heard of the lost city of Atlantis. A sunken continent, with rumors of utopia and extraordinary technology. It is one of my favorite legends of all time, so when I saw that was a part of the inspiration for A Drowned Kingdom I just had to read it.

The story is told through the first-person perspective of Second-Prince Othrun, second in line for the throne of Atalantyx, a beautiful island utopia that worships The Single God. P.L. Stuart does an amazing job of giving Othrun his own unique voice. While reading, I felt like I was reading a journal rather than a novel, and I mean that in the best way possible.

The first third, or Part One, of A Drowned Kingdom feels like the movie Casino. We cover a lot of time very quickly, with background information provided by Othrun. It’s almost as if Othrun is sitting at a campfire, relaying the events leading up to Part Two. For some, this may come off as info-dump, but for me, it was a unique, fun and engaging narrative choice that really makes A Drowned Kingdom stand out.

At times, all I could think to compare A Drowned Kingdom to is a Paul Thomas Anderson film. P.L. Stuart takes his time, finding beautifully small moments and making them feel as big as the battles. The writing feels very methodical, like you are walking through the scenes as Othrun.

The world-building and attention to royal lines is very reminiscent of George R.R. Martin’s A Song of Ice and Fire and I don’t say that lightly. The history of Atalantyx is deep and storied, with lots of detail and many colorful characters.

A Drowned Kingdom is an amazing start to what feels will be one of the great epics of our time. With a distinctive voice, well-defined characters and world full of mystery, I will definitely be coming back for more and I highly recommend you dive into…The Drowned Kingdom.