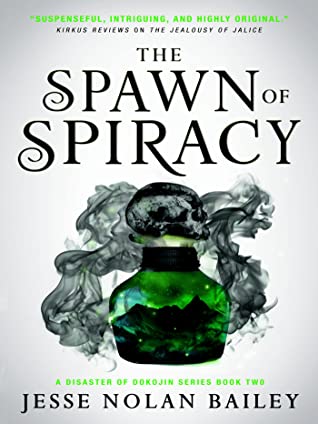 The Sachem has fled his Fortress. Many fear that he intends to turn on the Decayer Device.

Hoping to stop this, Annilasia resolves to track down the Sachem. But her plan falters when she discovers that, should the Sachem succeed in turning on the Device, the dokojin attached to her will rip her apart. Before she can save the world from the Sachem, she must first find a way to save herself.

Meanwhile, Jalice sets out to locate her long-lost brother, Kerothan. It is only with his help that she can hope to save the Sachem from his own wickedness. But the sins of the past are not soon forgotten, and Kerothan has no intentions of mending old wounds. He’s more concerned with the infestation of twisters that scheme to unleash a new evil…

…a new evil that eludes detection and festers in a forsaken place.

The Spawn of Spiracy is every bit the successor to the Jealousy of Jalice; the world expands in every direction, the world bigger, the characters familiar. Without needing to really mention it, Nolan Bailey is a great writer, the pages atmospheric, drawing me in once more. The world is rich, and there’s plenty new problems for our cast: the Sachem is banished, but the danger not gone. And there’s an experimental Dokojin that might be the answer. Though, somehow, Spiracy is loose.

My favourite part of Nolan Bailey’s books will always be the world-building and the depth at which they explore this; there’s an answer for everything, and it is redoubled in this sequel. We get to explore the aether in more detail; glass wands and how they’re made; the twisters and the Dokojin, even seeing Annilisia at a school for twisters, learning the aether, and many more … secrets. She’s probably my favourite character, I like how headstrong and capable she was in the first, for it then to be flipped on its head slightly toward the end of the book. In the sequel, we have her in a very unfamiliar situation with regards to the first, but she doesn’t disappoint, being at what I would call the forefront of the most intriguing part of the book: Spiracy. Though, I will not go into too many details there.

I’m not entirely sure I enjoyed this book as much as the first: Jealousy focused on Jalice discovering what happened in the black house, and I thoroughly enjoyed the sense of discovery as the character moves through the fog, and at times despairing at what she finds. And what she had forgot; this one, as I’ve said, expands on the world a lot more but I wasn’t so invested in what was happening. Though, I’m a mood reader and I can’t help but let this affect my opinion on what I’m reading. It might be that it wasn’t the right time for me to revisit this series yet and says nothing about what I feel for Jesse’s writing.

One thing I’ve said before and I’ll say again, the author knows their craft.  The pacing is on point, there is truly not a dull moment, and the action intersperses nicely with the exposition. I’m rating this one highly because I know that sequels are a different ball game and this one is executed very well. If you’re looking for a great dark fantasy series, this might just be what you’re after.