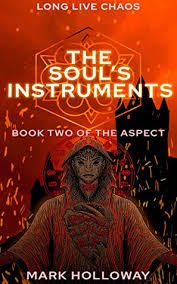 Kehlem the Butcher. Hero. Villain. A pale ghost that haunts the empire, or righteous revenant of Casere. Titles thrust upon him that he had no desire to bear, charged by the Aspect itself to end the Vin Empire. And yet his true and only desire is to get to Mercy before the empire does, to salvage his only chance at redemption.

But change is coming. He can feel it in the crushing weight of his waking nightmares. See it in the uprisings in the empire. Hear it in the hushed rumours of Seer assassinations.

The Aspect demands retribution. Balance. Where there was Order, may there be Chaos.

“We’re in this now. People do get hurt. People will die. But there comes a point when something is worth dying for. Something is coming, I can feel it.”

After reading the first book in this series a few months back, I had a feeling this would be just as enjoyable. I was not wrong. What a book! I’m still reeling from it.

We continue to follow Kelhem in first person POV, but the story has now expanded to include another POV character Broch, who we met in book one. The first instalment of the series ended on a very dark note, and I wasn’t sure if that was going to continue into this book or not, or if the author would return to the cosy feel we started with at the beginning of the story. I was so glad to find out we get a bit of a mix, with Kelhem reuniting with Eva early on, and the two of them setting off on the run together, while trying to put the puzzle pieces together of what is actually going on.

The author strikes such a perfect balance between the suspense and tension of the story, while also allowing time for character and relationship growth in what I really felt was quite an organic and heartwarming way. Kelhem gets great growth through this book, and his relationship with Eva couldn’t help but make me smile. It captures the teenage infatuation aspect of their relationship, while still remaining authentic at the same time. The enchanting feel I loved in book one was not completely lost in this instalment, and I loved that.

However, the dark undertones of what’s to come never fully go away. Underneath the warm and fuzzy scenes the darker, wider story is still at play the entire time, looming in the background, and keeping you on edge as the reader. I’d be lying if I said that this aspect didn’t have me glued to my chair unable to put this book down. The tagline of the book is ‘Long live chaos’ after all. I had some guesses as to where the story would go, certain bad things I was just waiting to happen, and I’m glad to say I was wrong with my guess. But just be warned that the author does not hold back in this book guys! It’s dark, gorey and it all hits the fan. And when it does it’s spectacular.

One thing I really loved about this book was the world building, particularly around the Aspect and the information we get on how it works. In this book the story widens out and we get more of a sense of the wider world, and Kehlem’s knowledge of the world grows alongside ours. The Aspect is another plain of existence alongside our own, where users, or Aspectors, are able to tap into the energy there and use it for a range of purposes, both healing and destructive. I really love this whole system. It’s fun and has it’s own unique feel to it.

The character arcs in this book are very well done. The author’s writing style is one I could read for hours and hours. I loved the exploration of doing bad things for the greater good, dealing with trauma, and the grief of the past. The addition of Broch’s POV really added a lot to this book, and I absolutely loved it. The particulars of his story are ones I can’t really comment on for spoiler reasons, but his whole arc made me go through every emotion on the spectrum. Another character I really loved was Eva. It was great to see her character become such a strong, confident female figure who stands up for what she thinks is right and won’t sit back. We also get some new characters who I enjoyed following too.

All in all, everyone should read this book. I can’t wait for book three. Bring on the chaos!