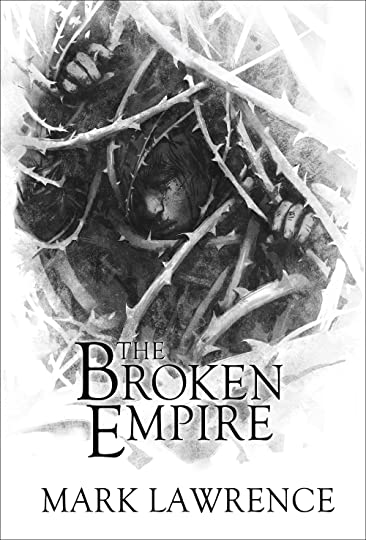 How does one give such a wonderful trilogy justice with a review? I get that reviews are supposed to sway readers to purchase, and it works a good bit of the time, but it usually just gives the author a satisfying feeling that someone truly appreciates their craft. Well, I am going to attempt to do The Broken Empire series justice by writing a review on all three (3) novels and Road Brothers. If my review does not at least tempt you into trying Prince of Thorns, maybe the fact that lovers of this series (including myself) have bought multiple copies of these books to have and to cherish. In fact, I have every book in HC and I just purchased the Limited Edition HC Omnibus of The Broken Empire over at Grim Oak Press because I am so infatuated with Jorg Ancrath (on top of the book being signed by Mark, some gorgeous interior by artwork by Jason Chan, and the book being a beaut overall) – Link: http://grimoakpress.com/product/limited-edition-of-the-broken-empire/ 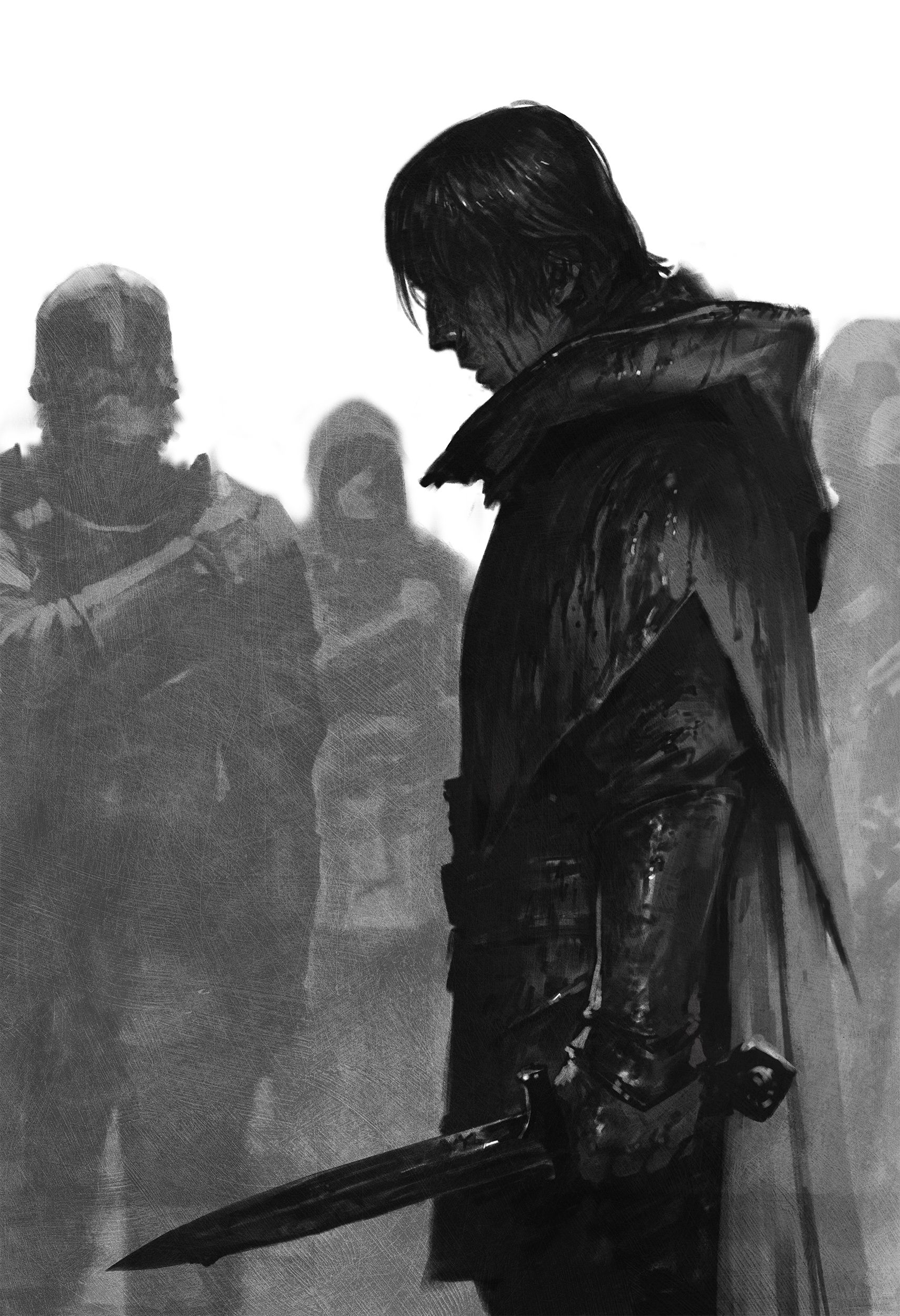 Prince Honorous Jorg Ancrath was a boy of nine when Count Renar’s men ambushed he, his mother, and his brother. Thrown into a briar patch, each movement carrying him deeper into the thorns and accounting for more and more blood loss, he is forced to watch as his brother is killed; his mother raped, and killed as well. A little while later, on the brink of death, he is found and rescued from the briars, leaving deep scars that will last and haunt him the rest of his life. He vows to make Count Renar pay for what he has done, swearing that one day, he will be King.

The above is not actually how the story starts out, but is more of a flashback to how we receive the current character of Jorg. We actually begin with Jorg and his band of Road Brothers pillaging and raping their way across the Broken Empire. As the story moves along, we are introduced to all of his brothers, each ruthless and cunning in their own ways, and how Jorg became their supposed leader, but not without having to first prove himself.

Jorg is a fascinating character in is growth over these few years span in PoT because he never really becomes one that you can get behind. He is about as anti-hero as one can be, yet you still feel for him in some ways. His father, the King, is a right POS and we come to find out some behind the scenes motivations that lead to Jorg being the way he is. At the same time, his journey over the past few years has made him a stone-hearted killer that shows absolutely no remorse for his actions and you have to sort of hate him for his ways. He is truly a character that is never meant to be understood and if you end up finishing out the series, you’ll see what I’m talking about.

While PoT starts out as more of a stabby stabby/politically infused story, the magic soon begins and directs the flow of the rest of the novel (and even the rest of the series).

“They call me a monster and if it were untrue the weight of my crimes would pin me to the ground. I have maimed and I have murdered and if this mountain stood but a little higher I would cut the angels from their heaven. I care less for the accusations than for the rain that soaks me, that runs down every limb. I spit both from my lips. Judgement has always left a sour taste.” Select Mode (Road Brothers) 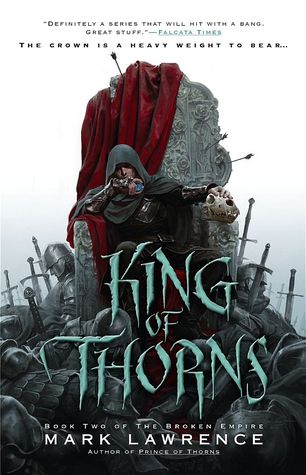 Prince Jorg has defeated his uncle, Count Renar, and overtaken the Renar Highlands as the new King. Though this is just the first step in avenging the deaths of his mother and brother, Jorg has discovered the puppeteers behind the ongoing war and the pieces they control, and no, I do not mean the bags of human flesh that sit upon the other thrones of the Empire. On top of this game of chess, the Prince of Arrow, a man whom the people of the empires are infatuated with, is marching an army of six nations to Renar’s gates. A man whom Jorg should bend the knee to, but refuses to do so.

KoT, unlike PoT, is developed with three (3) unique storylines: Jorg’s wedding day (the present), four (4) years into the past and his storyline up until now, and the third is a POV of Katherine Ap Scorron via a series of journal entries during her encounters with Jorg. All of these storylines mesh so brilliantly and Lawrence lays it out, chapter by chapter, in a form that is easily followed; using dates and the phrase “four years earlier”.

King of Thorns was, I can’t believe I’m saying this because I loved all of them, my favorite of the bunch just because we were able to see Jorg’s growth, even though he is still the sarcastic, evil a-hole he was in PoT, and because we finally see some chinks in his armor/a little doubt creeping into his mind.

“The catch of course is that knowing the full depth of any human, knowing their hopes and frailties, the hurts of their past, the tremor with which they reach for the future… that knowledge is akin to love.” 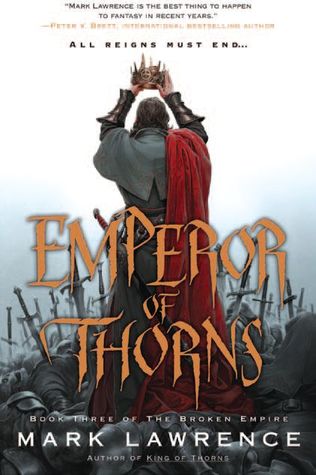 A man of twenty, King Jorg’s reign now spans seven (7) nations, and his sights are set on becoming emperor over the rest. Unfortunately, the only way to become emperor is by vote, not by slaying your obstacles. Jorg, leaving behind his wife and all that he has conquered, must use his silver tongue instead of his sword to receive backing to the ultimate throne, but something even more gruesome and dark stands in his way: the Dead King. Never has anyone secured a majority vote to become emperor, and Jorg will not let the past nor this new foe block his path.

One again, like in KoT, we are introduced to multiple story arcs, including past and present Jorg once again, though the Katherine Ap Scorron timeline is replaced by the necromancer Chella (whom we met in PoT). Though I don’t feel like Chella’s arc added THAT much to the story, it was still enjoyable and showed us the true monster that is the Dead King. Also, while EoT takes place across the Broken Empire in a much larger way, the book is fairly short and the world-building isn’t as fleshed out as it could have been. But, let’s be honest, you aren’t reading this for the makeup of the towns and cities.
All in all, EoT was a very enjoyable read with an all-encompassing revelation at the end. 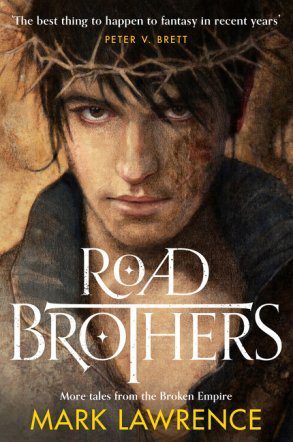 Road Brothers (the new release with new cover) is a collection of fourteen (14) short stories set in the Broken Empire. These stories include some of our favorite Road Brothers, such as Sir Makin, Red Kent, the Nuban, Rike, Burlow, among others. There are also a select few about/containing Brother Jorg throughout the Broken Empire trilogy, including ones about his younger years before he became King.

I’m not going to go into detail about every story, because you can find out those on your own when you read them, but my favorite story out of the entire collection was “Know Thyself”. We follow Father Gomst as he attempts to wrangle the young Ancrath boys and keep them out of trouble. The story shows just how vicious the boys are in their younger years and also foreshadows what is to come in EoT. I thought it was bloody brilliant and made sure to seek Mark out and tell him.

Overall, Mark Lawrence has quickly become one of my favorite writers. The Broken Empire trilogy is one of the best series I have ever read and maybe one of the best ever written. A combination of beautiful writing and a character you will become infatuated with makes this a must-read series. I would be remiss if I did not give due props to James Clamp for his fantastic narration. Not sure of another narrator who could do Jorg justice and provide perfect pacing. If you call yourself a grimdark fan, pick up this series without hesitation.