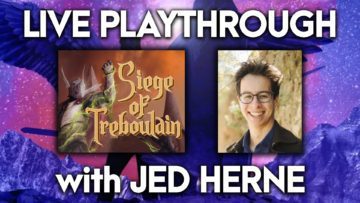 Join FanFiAddict’s Adrian M. Gibson, Tori Gross and Connor M. Caplan as they play the beginning of Siege of Treboulain live with Jed Herne. They had a great time experiencing the game together, crafting a consistent main character and making decisions as a team (with the occasional inconsistent decision to throw gasoline on the fire). Jed also answered some questions about the game’s worldbuilding, character progression and more.