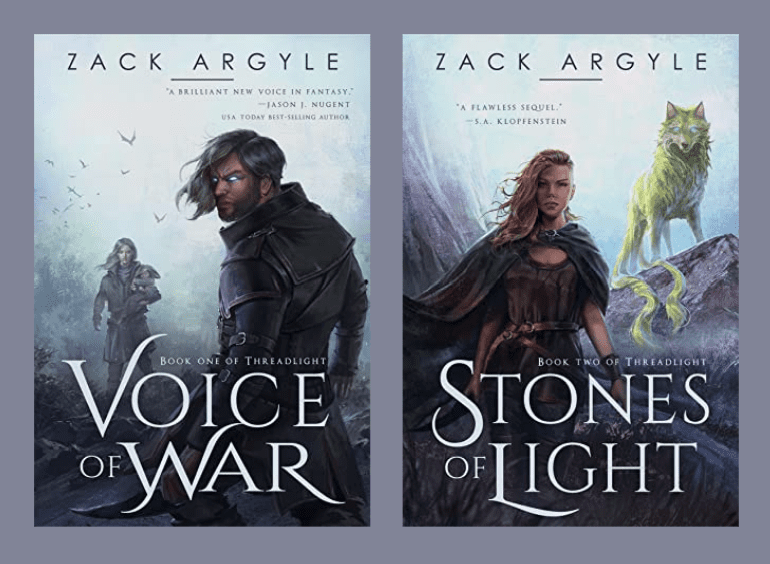 While preparing for the birth of his first child, Chrys Valerian is tasked with uncovering the group responsible for a series of missing threadweavers—those able to see and manipulate threadlight. With each failure, the dark voice in his head grows louder, begging to be released.

A young girl from a secret city in the center of the Fairenwild veers off course to explore the streets of Alchea, never expecting that her journey would end in chains.

Far in the deserts to the south, a young man’s life changes after he dies.

When Chrys learns who is responsible for the missing threadweavers, they come for him and his family. He must do everything in his power to protect those he loves, even if it means trusting strangers or, worse, the growing voice in his mind.

Together, these three will change the world—whether they intend to or not.

Zack Argyle’s Threadlight Series is a fast-paced, epic fantasy story centred around three main POV characters. It appeared on my radar after reading some great reviews and praise for this series after it became a finalist in SPFBO in 2021.

The story starts off with some great world building and an epic magic system right from the get go. The Threadlight system reminds me a lot of Sanderson’s magic system from Mistborn but Argyle has woven his own take on things and the system in this book really does stand very well on it’s own. The system centres around the threads that bind everything within the world, and how certain individuals can push, pull, sever and create these threads. Threadlight also has an addictive element to it which makes things interesting for one character in particular.

The magic system is complex and multi-layered but not overly difficult to get your head around. A great balance! The world is colourful and full of fun, and I found that the way things are added to in the second book was done really well. I loved the Chroma-wolves, and the unexpected twist that’s added with them in book two!

The story discusses themes such as family, loyalty, parenthood and finding your place in the world. I loved the focus in family and parenthood; something not often touched on in fantasy (at least from what I have read).

The characters are all well thought out with clear motives and agendas. I’m surprised at how much the author has fit in to these short books (short by fantasy standards). The characters are all individuals who stand out on their own. They are relatable and well written. The first book focuses more on Chrys with Laurel woven in there a fair bit but the second book really lets Alverax shine through. He is a super fun character. I enjoyed how each character’s different voice was written in their chapters. They are all distinct and have their own way of seeing the world, which I felt came across really well in the writing.

I enjoyed this story a lot in the Voice of War. I felt things were set up well and the characters storyline’s captured my attention from the start. There is a good balance between serious tone and humour. It did end a little abruptly in my opinion and I was left with some questions. I felt the first book didn’t give enough time to really flesh things out properly, which left me a little on the fence in terms of my thoughts.

However, book two answered all of those queries and doubts I had. Everything just got bigger, better, and more intriguing. Stones of Light really is everything a sequel should be. It’s clear that a lot of thought went into how this story was told. Book two really shows you more of the world and the lore, and the stakes get higher and higher. The character journeys continue to get more in depth and connected. The magic system and world building gets deeper and we really get into things in more detail that book one didn’t have time for. A great sequel that really cemented my love for this series.

I’d also like to quickly mention how stunning the cover art for this series is, and what a great job the narrator has done for the audio version. Top notch in both of these areas!

If you are looking for a relatively quick, and truly satisfying read that will leave you wanting more, I highly recommend checking out this series.

The third installment, Bonds of Chaos, releases on August 25th.