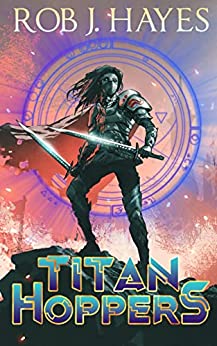 Courage Iro will shatter the Gates of Power to protect his fleet.

Born talentless, Iro has all but resigned himself to a life of drudgery, watching his sister hop across to the massive space titan for supplies. But when the titan explodes and his sister is killed, Iro finds a new determination to take her place. He’s not about to let weakness prevent him.

When the fleet encounters a new titan, filled with powerful monsters, deadly traps, and mysterious cloaked figures, Iro is the first to spontaneously manifest a new talent. Now sent to a different ship, to train with others far beyond his strength, Iro will have to train twice as hard just to catch up.

To protect his fleet, and to uncover the mysteries of the titans, Iro won’t just open the Gates of Power. He’ll break them.

Titan Hoppers was a quick fun read with some brilliant world building.

The story kicks off almost from the get go, as we get introduced to the mysterious sci-fi world where the MC is part of a convoy of space wanderers who survive by salvaging stuff from mysterious ‘titans’. It is more of a in-situ introduction to the readers as we are dropped into the world first and the building happens through various nuggets spread across the book providing hints of the characters, the world and it’s history.

For me, the Dungeon [Relic] Diving in space was a pretty cool concept and it added in space fights, potential alien technology and mystery into standard Dungeon Diving tropes to give it a new spit and polish look and feel. Really loved it. Though it does not delve into new grounds, the tropes of MC’s conviction, the training elements and the threat that looms ever bigger as plot goes were all done very well and I kept the pages turning non stop till the end. The magic system is quite novel with the concept of breaking gates to advance and become more powerful is something novel and I have not come across similar before. Getting in both the physical, mental and emotional elements as part of overall package into the magic system was also very interesting to read.

Overall books is a medley of various other genres that’s been put together into a new whole. Every time I felt I had a hold on the plot, a new curve was thrown to keep things spicy.

As to niggles the book suffers slightly from uneven pacing, especially in middle segments. Though we get a lot of training and action though the middle segments, there’s little progression either in plot or characters. that aside, the climax was action packed and edge of the seat ride that more than made up for the middle segments

Still, overall…. It still is a interesting read with a refreshingly new world and I’m interested enough to wait eagerly for Book 2.