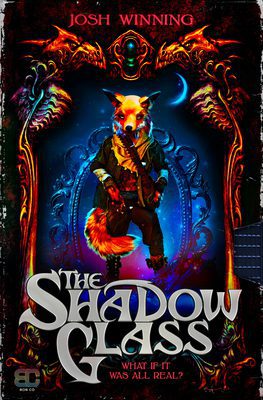 A thrilling race against the clock to save the world from fantasy creatures from a cult 80s film – perfect for fans of Henson Company puppet classics like Labyrinth and The Dark Crystal, and The NeverEnding Story.

Jack Corman is failing at life. Jobless, jaded and facing the threat of eviction, he’s also reeling from the death of his father, one-time film director Bob Corman. Back in the eighties, Bob poured his heart and soul into the creation of his 1986 puppet fantasy The Shadow Glass, but the film flopped on release and Bob was never the same again.

In the wake of Bob’s death, Jack returns to his decaying childhood home, where he is confronted with the impossible — the puppet heroes from The Shadow Glass are alive, and they need his help. Tipped into a desperate quest to save the world from the more nefarious of his father’s creations, Jack teams up with an excitable fanboy and a spiky studio exec to navigate the labyrinth of his father’s legacy and ignite a Shadow Glass resurgence that could, finally, do Bob proud.

As one of my most anticipated reads of 2022 (and also being entirely new to this author) I was super excited to get into this super nostalgia trip. And what a trip it was!

I’m of the target age for this book 100%. I remember many days watching and re-watching The Neverending Story, The Dark Crystal, Labyrinth, even Fraggle Rock. I was so engrossed with these imaginary creatures and the surrounding world it really cracked open my imagination at a young age. But enough about me.

The Shadow Glass is the story of a lost man, jaded by life and estranged by his father, Jack Corman attempts to get out from under the looming shadow of his bad memories and into a ‘new life’. Hes turned his back on the legacy that his father built and is done trying to reconcile his guilt for his fathers downfall. Though through the story Jack experiences the adoration of the fandom that his father had created and as the story progresses we see a bit more growth from Jack which was really well done.

The characters and creatures here are what really shines in the story. Sandwiched between the familial reconciliation of our protagonist Jack are fresh and exciting creature-characters that are not too far fetched and not too familiar. The world of Iri and it’s inhabitants – the Kettu, Wugs, Skalions, and the scene-stealing Lub- were the highlight of the story. I really wanted the book to spend more time in that world and really engross us in it’s lore. But viewing it from the outside combined with the sprinkles of the flashback snippets and original screenplay scenes in between chapters was a really great touch.