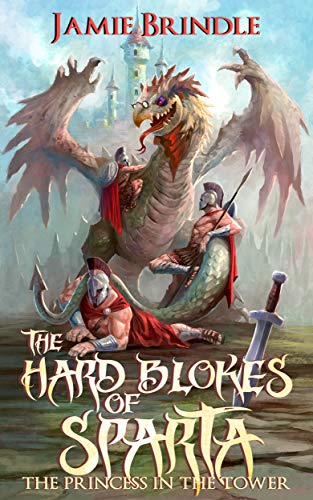 Back on earth, in Ancient Greece, they were the hardest guys around. But since being sucked through a Reality Vortex to the mysterious Level 31, Dave and his friends are really struggling to be the muscle-for-hire which is the only way they know to earn a living.

Now they have one last chance: rescue a princess from a tower, or fail to make their rent, and face eviction and probably involuntary enrolment in a less-than-pleasant brutal-fighting-pit scenario.

But how can a man – even a spartan – compete with orcs and goblins, chimeras and cockatrice?

This is the first of three stand-alone but linked comic fantasy novellas charting the fortunes of The Hard Blokes of Sparta.

Dave, Chad and Phil, the Hard Blokes of Sparta were unlucky enough to get sucked into a Reality Vortex and end up in the mysterious Level 31. Even more unluckier for them, the level is filled with various types of aliens and monsters far stronger than them, relegating them to working the bottom of the barrel to survive.

When the mysterious Prince Ahmed hires them to rescue a Princess, they jump at it. Kill some creatures, rescue the Princess, what could go wrong, eh? After escaping from their first hurdle, a cockatrice that beat their ass blue, made possible only by some smooth talking, they really need a miracle!

This book is ridiculous and I mean it in literal sense. It silly, it has juvenile off the cuff humour….and it’s glorious! I mean I was laughing from the get go and every time the author take a poke at the tropes, it just gets better. The book does not take itself seriously and neither should you. It was just plain absurd and whole lot of fun!

A very short book at 220 print pages, there’s not much of plot or character building, but the author does an admirable job of introducing us the the world and the out of luck Spartans. One ridiculous scene follows another and I just stopped trying to guess what comes next and just kept the pages turning. A tropey story in a book dedicated to making fun of them.

If you are looking for a palate cleaner between heavy reads or just out for some mindless wholesome silliness and fun, give this a go. I enjoyed this!