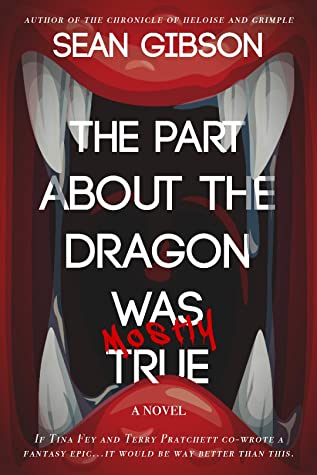 Sure, you think you know the story of the fearsome red dragon, Dragonia. How it terrorized the village of Skendrick until a brave band of heroes answered the noble villagers’ call for aid. How nothing could stop those courageous souls from facing down the dragon. How they emerged victorious and laden with treasure.

But, even in a world filled with epic adventures and tales of derring-do, where dragons, goblins, and unlicensed prestidigitators run amok, legendary heroes don’t always know what they’re doing. Sometimes they’re clueless. Sometimes beleaguered townsfolk are more hapless than helpless. And orcs? They’re not always assholes, and sometimes they don’t actually want to eat your children.

Heloise the Bard, Erithea’s most renowned storyteller (at least, to hear her tell it), is here to set the record straight. See, it turns out adventuring isn’t easy, and true heroism is as rare as an articulate villager.

Having spent decades propagating this particular myth (which, incidentally, she wrote), she’s finally able to tell the real story—for which she just so happened to have a front-row seat.

Welcome to Erithea. I hope you brought a change of undergarments—things are going to get messy.

NOTE: I will mention here that I had listened to the audiobook of this and the performance by narrator was an absolute joy. Every character has such a vivid voice and the accents were impeccable. There’s even a fully produced bard’s SONG that Heloise performs. Kudos to Haley Catherine for the narration. I would recommend if you’re going to read this, to get it on audio. Check the sample on Audible. Narrator – https://www.haleyscatherine.com/

This one goes out to the goofballs, the class clowns, the ‘clever dads’, the Monty Python scholars, the Terry Pratchett lovers. This is one of those books that are intended to subvert expectations, sidetrack the dialog for an impeccable pun delivery, shower you with hyperbole, clog you with toilet humor, and feed you more running gags than a Orcish buffet. Gibson embraces the absurd and unexpected and flawlessly creates a D&D comedy story for the ages.

Sure this story of the rag-tag group of adventurers overdoes it at times, but that’s exactly what Gibson has set out to do. I mean just look at these characters:

Heloise the Bard: As egotistical as she is talented (and boy, is she talented), half-elven Heloise is, by her own account, the greatest bard in all of Erithea. Many years ago, she penned a now legendary ballad about a brave band of heroes that saved the village of Skendrick from a vicious red dragon. Turns out she did a heck of a PR job for those heroes, though, and finally lets us in on how things actually went down.
Nadi Ghettinwood: The elven leader of our heroes, Nadi is smart, competent, tough, rational, and level-headed, all of which makes her a total anomaly compared to her ridiculous adventuring companions.
Rumscrabble Tooltinker: A half-dwarf, half-halfling prestidigitator whose perpetual (if borderline psychotic) cheerfulness constantly buoys (and occasionally annoys) the group.
Whiska Tailiesin: A foul-mouthed Ratarian wizard who’s got power to burn and many an axe to grind, not to mention a proclivity for eating stomach-turning dishes.
Borgunder Gunderbor: The proverbial gentle giant, rock giant Borg is slow, but by no means slow-witted. He’s not much of a fighter, but he can sure take a punch.

And that’s the just beginning. Through the pages you’ll find the gender relations of bog-men (are there bog-women?), lean about the digestive process of rock giants, and smell all kind of awful and nauseating smells. (oh and I can’t forget to mention all of the prestidigitation!).

So yes, this book is absurd to the fullest extent and if you’re in the mood for plenty of chuckles and eye-rolls, unreliable narrators, angry rat-wizards, in a world where you’ll never expect what comes next. Pick up this silly good time!