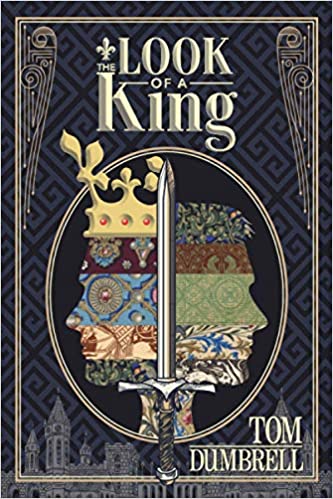 Two young men.
One with a dark past, the other with a bright future.

Cyrus is a storyteller frustrated by the mundane trappings of village life, while Prince Augustus struggles to meet high expectations after an upbringing of royal privilege in the bustling capital. As both try to forge their own paths, a royal assassination unexpectedly closes the gap between them. The nation of Easthaven is thrown into war with their oppressive neighbours, and so begins a conflict from which neither can walk away.

Will a young prince finally measure up to his destiny? Will a storyteller create a legend of his own?

Cyrus and Augustus’s lives may seem worlds apart, but perhaps they aren’t so different after all…

I found The Look of a King via social media recommendations, so finally decided to give it a spin. I’m extremely glad I did, because I ended up loving every moment of it.

The Look of a King (TLoaK) is a relatively short book that packs a huge punch with how much happens in 280 pages. Personally, I’m one for fast paced high action reads, and in my opinion TLoaK delivered this in every way. I never felt like there was that typical lull in a fantasy story, or that it was bogged down by too much world building and descriptions, instead there was just the right amount to immerse me in this intriguing world.

TLoaK is set in a medieval world within the confines of Easthaven, a kingdom enjoying peace under its ruler King Anselm. It’s quickly made clear that peace and alliance hang on a thread as the old make way for the new. A very young, inexperienced and headstrong King Augustus is forced to follow in his fathers footsteps and lead his country. At this point I wasn’t sure where the story was going, but Dumbrell brilliantly delivered some intriguing twists and turns that drove the plot forward and immersed me further into its world. I can’t explain why, but somehow TLoaK gave me the kind of nostalgic feelings I used to experience when reading or watching fantasy when I was younger. I somehow got adult (keep that mind clean) Disney vibes from the book (sorry Tom if this wasn’t what you hoped!).

TloaK is definitely a character driven fantasy, which for me is what I search for in fantasy. It introduces the reader to a strong and varied cast of characters, firstly there is Cyrus, a man who does not posses many skills other than the ability to weave a great tale, yet somehow finds himself in all right and wrong situations. I won’t say too much about Cyrus, the protagonist, in fear of giving away key points of the story, other than the fact that I found him the perfect character for the situation he was thrown into. One character that hugely stood out for me was Garrett, who felt like the father figure or even Gandalf, without the magic. The interactions between Cyrus and Garrett were both welcoming and heart-warming, and at times sarcastically funny. Lastly, in terms of main characters there is Augustus, who had some interesting qualities, that really became the centre point in making him the ideal antagonist.

Dumbrell’s prose flowed well and drove the story forward, making this a real page turner, so that I virtually finished it in one sitting. In fact, I found Dumbrell’s writing almost poetic in the way that it captured scenes so eloquently. The added humour at times made the story even more heart-warming to me.

If it wasn’t obvious, then it is now, go grab this heart-warming, nostalgic and fast-paced indie fantasy. It’s a brilliant one-sitting-read or a cure if you’re suffering from the old fantasy slump/hangover.