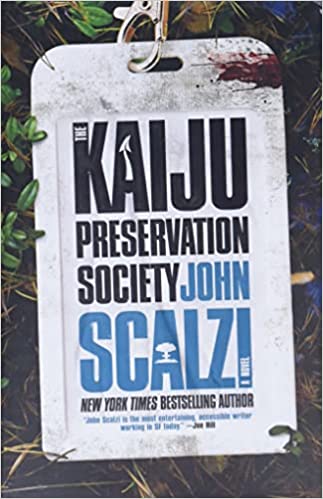 When COVID-19 sweeps through New York City, Jamie Gray is stuck as a dead-end driver for food delivery apps. That is, until Jamie makes a delivery to an old acquaintance, Tom, who works at what he calls “an animal rights organization.” Tom’s team needs a last-minute grunt to handle things on their next field visit. Jamie, eager to do anything, immediately signs on.

What Tom doesn’t tell Jamie is that the animals his team cares for are not here on Earth. Not our Earth, at least. In an alternate dimension, massive dinosaur-like creatures named Kaiju roam a warm and human-free world. They’re the universe’s largest and most dangerous panda and they’re in trouble.

It’s not just the Kaiju Preservation Society that’s found its way to the alternate world. Others have, too–and their carelessness could cause millions back on our Earth to die.

The Kaiju Preservation Society is the latest release from famed SFF author John Scalzi. It is a story about a group of people tasked with preserving kaiju, which are interdimensional, giant flying creatures (I picture a cross between a dragon and a dinosaur). I got Avatar-meets-Jurassic Park vibes from this book. It was an enjoyable read.

When I reread what I wrote “interdimensional, giant flying creatures” that are a cross between a dragon and dinosaur, it actually sounds really hokey. Especially when I add that COVID-19 is a backdrop for the narrative (COVID-19 is not very present in the story, though, as most of it takes place in the other dimension). But, I think it is a tribute to Scalzi’s writing when I say that, for the most part, it is not. The buy-in is the kaiju, and the author does a great job of not only making them the centerpiece of the story (even though Jamie is the main character) by introducing the reader to them early on with a close encounter scenario and making their presence constant throughout the story. As the scientists onsite teach Jamie and his friends about the kaiju and what is being done to preserve them, the reader learns right along with him and is able to gain knowledge through Jamie experiences with the creatures, as well.

I enjoyed the dialogue, in particular, as well. It is often snarky and humorous (which, even though this is my first Scalzi, I have heard is typical of the the author’s writing style). But, it also because serious when the situation calls for it. Themes of teamwork and compassion permeate the story, as well, which I am totally into.

For me, though, I do wish the main conflict would have been breached earlier in the book. There is a lot of lead up, and I get why: as I mentioned before, the author wants the reader to learn about the creatures, first. But, I think that could have been accomplished while bringing the villains of the story in sooner than they were. I spent much of the book liking what I was reading, but wondering where it was all going.

The Kaiju Preservation Society is a unique and fun read. I enjoyed picturing these interesting, complex animals and experiencing their world. And the story was quite adventurous. If my comp of Avatar meets Jurassic Park is something you would be into, pick this one up.