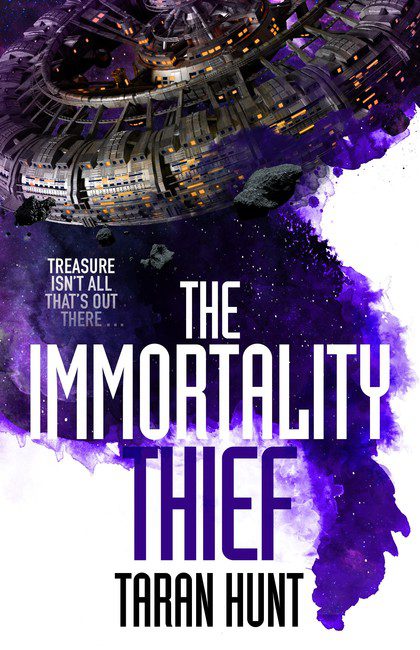 When linguist and smuggler Sean Wren takes on a job to find a priceless piece of data, it sounds conspicuously simple. Board the abandoned space station, get the data inside and keep anything of interest he might find for himself.

Nothing’s ever that simple. If the remote-controlled bomb in his neck isn’t bad enough, The Nameless is a space station full of genetically modified experiments that want to rip him to pieces and the technologically advanced superhuman Ministers – similarly not averse to ripping him to pieces – are also looking for the data. And it’s right next to a star that’s about to go supernova in a matter of days.

Taran Hunt is on to something here. This genre bending sci-fi horror brings shades of Dead Space and Resident Evil to space opera. If you are a fan of things that go bump in the space station, you’re going to enjoy this.

So, is it a horror? It sure feels like it. Sean is a quintessential loudmouth space rogue who really finds himself in the wrong place at the wrong time. He dubs the stranded space station The Nameless early on and soon falls foul of the gene-spliced inhabitants. The Nameless is full of lab experiments gone horribly wrong. Worse still, the experiments are pissed. With no choice but to press on and find the Philosopher’s Stone – the name given to the experiments that took place on board – or see himself and his friends’ heads explode, Seans simple mission goes south straight away.

The Immortality Thief soon turns into a really claustrophobic novel. If having no room to move gives you the heebie-jeebies, you’re going to be reading heart-in-mouth. The cramped station adds so much tension throughout the book as characters climb, crawl and slice their way through its innards. Sean leads the way in space station spelunking through passageways that have collapsed and have been haphazardly repaired by the ship’s AI. The halls are dark and lit only by flashlights and full spectrum light collars. Hunt gives us very little space to breathe and it’s really addictive. Even the chapters themselves barely stray over five pages which keeps the pacing tight and punchy. It’s a real hold-your-breath novel.

The main factions are two warring powerhouses – the generations-long battle between human-led Republic and the overzealous guardianship of the Ministers roils in the background and both make an appearance (unfortunately for Sean). Forced into a part of three are Sean, Indigo of the Ministers and Lantern Eyes (later Tamara Gupta) of the Republic. We’re introduced early on to Indigo when he skewers one of Sean’s companions. Lantern Eyes has been living in the walls and halls for years after her crew didn’t survive The Nameless’ inhabitants and she marks her first appearance with a scream (we don’t find out why she does that until just before the final act).

Indigo was by far my favourite character in this. I loved the concept of the Ministers and Hunt delves into their history as the station’s secrets are slowly uncovered. To try and simply say that he’s a morally grey character would be selling him short (not least because his name is fricking Indigo). He switches from side to side as seamlessly as his heated blade rends the station’s walls. It’s been a while since there’s been a character when one chapter you can cry “What an absolute bastard” and the next, “Indigo better not die or I’m giving up reading forever.”

Sean’s own past with the Ministers is being one of the few survivors of their sacking of his home planet in a bloody and brutal strike. Despite the friction his uneasy alliance with Indigo causes they’re still the best of unlikely buds. It all adds to the tension of the book and the fact that all three characters know that they will ultimately have to betray each other to get the station’s data hangs over all our heads constantly.

When the characters aren’t being chased or gored, Hunt plays around with the concept of immortality and her answer is the Ministers. Their role is to guard over humanity but they do so heavily-handed. The Nameless drip feeds the price of its immortality experiments and leads to a satisfying final act. The monsters take a back seat to the real horror of the scientists’ work. We get a good feel for the gravitas that “the philosopher’s stone” data undoubtedly delivers.

All in all, this is a seriously good sci-fi and I am absolutely here for any narrative that delivers so hard the “just what the fuck happened here?” hook. Hunt and Rebellion get a resounding pat on the back for what I hope will be a seriously epic series.