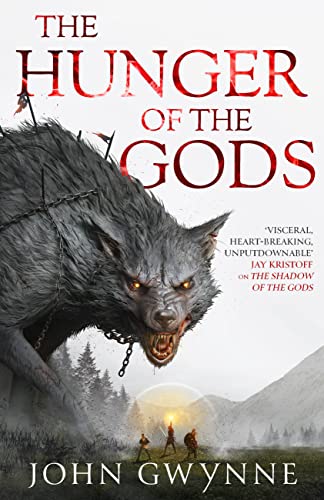 As Orka continues the hunt for her missing son, the Bloodsworn sweep south in a desperate race to save one of their own – and Varg takes the first steps on the path of vengeance.

Elvar has sworn to fulfil her blood oath and rescue a prisoner from the clutches of Lik-Rifa and her dragonborn followers, but first she must persuade the Battle-Grim to follow her.

Their hope lies within the mad writings of a chained god. A book of forbidden magic with the power to raise the wolf god Ulfrir from the dead . . . and bring about a battle that will shake the foundations of the earth.

Thanks to Orbit and netgalley for an ARC in return for an honest review.

Hunger of the Gods is the second book in the epic Bloodsworn trilogy by John Gwynne and is another amazing entry in the series. When I first read Shadow of the Gods, I was blown away and the well written characters and breathtaking action. Hunger of the Gods delivers more of the same great cast (including a new highlight) but suffers from a few pacing issues and middle book syndrome. (some spoilers for the first book follow)

First, let’s start with some of the wonderful things that continue from book one. The characters that we loved from Shadow of the Gods are back in full force and I loved continuing their stories. With the strong focus on Orka in the first book, I was a bit disappointed that she takes a bit of a backseat here, but this allows for others to shine.

Elvar particularly has some amazing moments and as I felt she had the weakest POV in the first book, it was wonderful to care so much about her journey. Varg and the Bloodsworn have some of the best moments from throughout the story and his found family plot continues to please although suffers a bit from a lack of development.

In Hunger of the Gods, we’re also treated to two new POVs from villain characters. One character’s arc is pretty standard and mostly serves to provides us insight into the enemy camp. It works fine, but he isn’t as compelling as some of the other characters. Our new perspective comes from Gudvarr, a warrior looking to make a name for himself among the heroes (or villains as the case may be). As the nephew of one of the land’s Jarls he wants to prove himself and Gwynne decides to do something he hasn’t done in one of his books before: give us an internal monologue!

Gudvarr is probably the highlight of the book for me. I loved reading his chapters and hear his inner voice as he attempts to rise above his station and yet doesn’t fool most people – this leads to some great moments of humor. He has a clear arc and it’s very enjoyable to read.

Another great aspect of Hunger is the action. Gwynne gives us some of the best he’s ever written and it’s here in full force. Limbs are taken off, creatures are fearsome, characters will die and much more. There’s some epic action set pieces here and they deliver on the goods. Some of the moments in this book are truly epic and make me want to continue to read.

The worldbuilding continues to grow and we see lots of new places around the land as our characters travel and travel around. Although this is where a few of the issues for me come into play. First, while the world is epic in scope, it seems that everyone is related to everyone else. We kept meeting characters that happen to be related to another of the main characters in another of the groups we follow. Usually, I don’t mind this too much, but it seemed a bit unnecessarily complex (and this from someone who has read and loved Malazan) and made the world feel small in scope.

Second, much of this book is our characters travelling from one place to the next, and then the next, and then the next. Not too much changed plot wise outside a few major developments. The action was still there and epic, but didn’t serve too much purpose some of the time (with the exception of Elvar who I felt had a good arc). There were several action scenes that felt like they were there just for action’s sake instead of moving the story along.

If it sounds like I’m being a bit too negative, don’t worry, there’s still a ton I really liked about this book! It just didn’t quite live up to my admittedly sky-high expectations. Overall, if you’re looking for an epic Norse inspired fantasy story with characters you care about and epic action, you’ll find a ton to love in Hunger of the Gods. It just suffers a bit from middle book syndrome. Still, I’ll be counting down the days until I can read the finale!!

I do hope you check it out when it comes out in a few weeks. And if you haven’t read Shadow yet, what are you doing?! Go read it now!