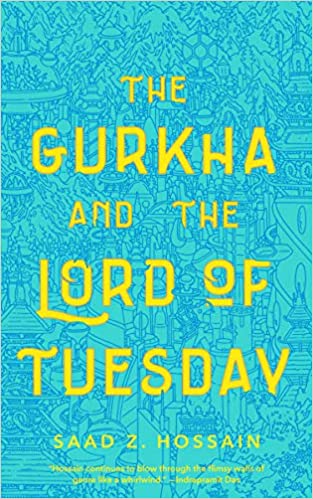 When the djinn king Melek Ahmar wakes up after millennia of imprisoned slumber, he finds a world vastly different from what he remembers. Arrogant and bombastic, he comes down the mountain expecting an easy conquest: the wealthy, spectacular city state of Kathmandu, ruled by the all-knowing, all-seeing tyrant AI Karma. To his surprise, he finds that Kathmandu is a cut-price paradise, where citizens want for nothing and even the dregs of society are distinctly unwilling to revolt.

Everyone seems happy, except for the old Gurkha soldier Bhan Gurung. Knife saint, recidivist, and mass murderer, he is an exile from Kathmandu, pursuing a forty-year-old vendetta that leads to the very heart of Karma. Pushed and prodded by Gurung, Melek Ahmer finds himself in ever deeper conflicts, until they finally face off against Karma and her forces. In the upheaval that follows, old crimes will come to light and the city itself will be forced to change.

The book is set in futuristic Kathmandu, Nepal which is run by a Artificial Intelligence called Karma. Karma is an all seeing entity that grades every person and allots them Karma (like points) which then becomes the main currency. The rest of the world is uninhabitable and though tyranical, Karma has made Kathmandu into a ‘cut price paradise’ as the author describes it. People are content, basic necessities are free and because of the omnipresent nature of the AI, the population stays in line.

Into this world, awaken the Djinn Kind Melek Ahmar, the Lord of Tuesday and one of the seven Djinn kings. After having being tricked into a long slumber, he awakens with thought of conquest and mayhem. But then he realizes the world is not even close to when he slept. He meets Bhan Gurung, a ex-Gurkha and exile in the mountains who has his own agenda of which Melek Ahmar is a pawn.

This forms the context of the plot as history unravels and the forces of Melek Ahmar, Bhan Gurung and AI Karma converge resulting in pandemonium and hidden revelations which would affect not just themselves, but the whole of Kathmandu!

It’s short but highly entertaining read that seamlessly blends the science of AIs and Nanotechnology with the fantasy and magic of Djinns. An addictive page turner that is surprisingly immersive despite it’s short page count. The utopian Kathmandu set in a dystopian backdrop of rest of world is rich and diverse and sucked me in. The characters are deep and make you really want to get to know better, full of soul and spirit with the bombastic Melek Ahmar to the sour Bhan Gurung taking the lead. The prose is light and filled with humour without really trying too hard to be funny. The satire is built in nicely with the characters themselves and it’s easy to mentally picture them just as we read about them.

Being a short Novella, there really isn’t a massive and epic plot, but the book still keeps the mystery unravelling smoothly till we get to the end.

I really enjoyed this and hopefully this review will inspire you to read this too.