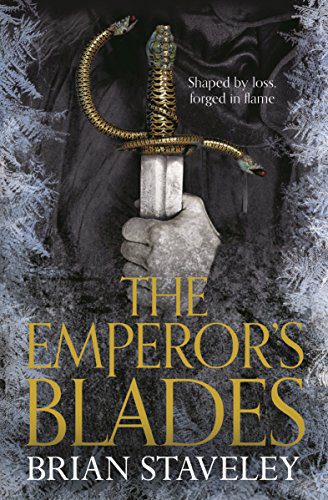 Great intrigues take place in secret in the kingdom and the reigning emperor is treacherously murdered. All the responsibility now rests on the shoulders of his two sons, Kaden and Valyn, and on the shoulders of his daughter Adare. The siblings have not seen each other for some years, as each child receives a different education to serve the Kingdom of Best as much as possible. Kaden, the heir to the throne, is taught in a mountain monastery and prepared for his soon-to-be role as emperor. Valyn, on the other hand, is being trained on an island to become a warrior and assassin. Only Adare continues to live in the palace and is an important minister. The three siblings try to uncover the insidious intrigue and come across something unimaginable.

Detailed and convincingly written, it transports the reader into a world of cruel intrigue, a desperate search for justice and bitter revenge. It quickly becomes clear that Brian Staveley is building a very detailed and multi-layered world, peppered with multi-faceted and varied characters. He lets the world grow little by little and so you are slowly taken into this world. Due to the fluid and memorable writing style, these wonderful descriptions and details did not become an obstacle for me and so I was able to build up a bond with this world. The old legends and tales from the past are cleverly woven into the present of the land and you find it hard to work out who is enemy or friend.

“I’m doubly sorry for your loss,” the old monk began after a time. “First, because every son should have a chance to know his father, not as a child knows his protector, but as a man knows another man.”

Another point that stands out are the multi-layered and authentically developed protagonists, who give the plot the final touch. They seem very authentic and gain more and more soul and life. Their actions and thought processes are always easy to understand. The two brothers Kaden and Valyn’s apprenticeships are mainly characterised by pain and struggles. Both grow up under extreme conditions and this does not leave the brothers unscathed. And Kaden in particular was my favourite character, because not only did he have the interesting plot line, which is partly marked by spiritual encounters and torment from his own teachers, but he is also a clever young man who doesn’t yet know what to expect in his life. I was also very taken with the side characters, especially Ha Lin, a companion of Valyn’s, who goes through thick and thin with him and really has it together. I found it a pity that we learn so little about Adare. She is unfortunately given very little space in the first volume, but the last chapter showed what a ruthless woman Adare is and I can’t wait to read more from her point of view.

“Obedience is a knife that cuts the cord of bondage.
Silence is a hammer that shatters the walls of speech.
Stillness is strength; pain a soft bed.
Put down your basin; emptiness is the only vessel.”

Above all, violence plays a big part in the novel. People are constantly fighting for their lives, being severely punished for trifles or learning to kill. The intrigues and power plays that are hinted at support the dark mood of the novel. This harsh world does not leave the characters unscathed, and not even me. The writing style fits perfectly to the dark and hard story and supports the atmosphere additionally. My black soul was very happy about this brutal story.

“Resist faith. Resist trust. Believe only in what you touch with your hands. The rest is error and air.”

The explanations of the descent, the slow increase of the threat, the hopeless situations that are always very narrowly overcome are fascinating. He makes some hints, lets the reader make some initial guesses, some of which can be shattered, but some of which can be taken away. The end of the first book is actually only the beginning, an introduction to the story, the journey of the three siblings and their fate. The fantasy author knows his craft and so he has succeeded in writing a novel that fans of the High Fantasy genre should definitely read.

“Any fool can see what's there. You need to see what is not there.”