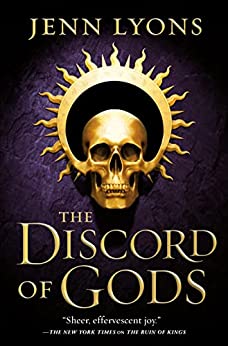 The end times have come.

Relos Var’s final plans to enslave the universe are on the cusp of fruition. He believes there’s only one being in existence that might be able to stop him: the demon Xaltorath.

As these two masterminds circle each other, neither is paying attention to the third player on the board, Kihrin. Unfortunately, keeping himself classified in the “pawn” category means Kihrin must pretend to be everything the prophecies threatened he’d become: the destroyer of all, the sun eater, a mindless, remorseless plague upon the land. It also means finding an excuse to not destroy the people he loves (or any of the remaining Immortals) without arousing suspicion.

Kihrin’s goals are complicated by the fact that not all of his “act” is one. His intentions may be sincere, but he’s still being forced to grapple with the aftereffects of the corrupted magic ritual that twisted both him and the dragons. Worse, he’s now tied to a body that is the literal avatar of a star – a form that is becoming increasingly, catastrophically unstable. All of which means he’s running out of time.

After all, some stars fade – but others explode.

The Discord of Gods is the 5th and final release in Jenn Lyons’ A Chorus of Dragons series. This is the book I have been anticipating most in 2022, and I could not wait to read it. Now that I have I am excited to tell you exactly how fabulous it is.

Over the course of the series, I have been through so much with these characters. It has been a huge roller coaster, so many ups and downs, often changing direction on a dime. There has been a ton of emotion, too. There is so much love in the narrative. People falling in love, yes, but every single character has sacrificed something of themselves to play their part in saving the world.That is true love – taking action to help others, not knowing if you are going to come back from it. There is also a ton of loss and betrayal. And several redemption stories. The whole thing is an emotional power keg, waiting to explode at any second.

What I love specifically about this book is the form in which the final act is written. It does not feel like a prototypical final book; then, again, almost none of the books in this series line up traditionally (an exception to that statement could be made for The Memory of Souls, book 3, which does read like a middle book, in my opinion). Lyons keeps the perspective antics going, following several at the same time. Kihrin is doing his villain/hero thing while also trying to deal with all of his personal shit. The other characters are lining themselves up to be as helpful as possible, as well. And there is so much to be resolved. There are gods, dragons, mimics, demons, and wizards all standing in their way. The scheme to make this happen is complex and fascinating. The first half of the book is bursting with so much intrigue it creates a ton of suspense, everything building to the ultimate climax. And the second half is nonstop. There are so many moving pieces, and once it starts to go down the reader does not have time to catch their breath. That’s okay, though; breathing is overrated in the face of great fantasy writing.

“…when it comes to a contest between Kihrin and Vol Karoth, or Kihrin and Relos Var, or Kihrin and the rest of the whole fucking universe, I will bet on Kihrin every time, and I will win. You forget that at your peril.”

There’s your boy Teraeth standing up for his guy. And I love it. The faith everyone has in Kihrin, no matter how crazy his plans are. He is absolutely insane, but it is that devotion that he inspires from everyone around him that makes Kihrin the perfect protagonist. People will follow him to the end of the world; as a matter of fact, that is exactly what they did.

The ending was absolutely perfect. I could not have asked for a better finish.

I am so happy with this series that it is hard to point out the few aspects I did not like so much. There are two things: first, is the fact that there is the ability to bring people back to life once they have died. If death does not mean anything, that takes away from some of the drama when people are in situations where they might die. It is more nuanced than that in this series, but still something I was not a huge fan of. Also, I thought the romance meter was turned up a little too high for my tastes. Some romance in my fantasy is enjoyable, but it felt a little over the top at times.

Overall, though, this series is absolutely fabulous. A Chorus of Dragons carves out its own space in the Epic Fantasy genre, flipping many of the components of traditional fantasy on their head and building something completely unique in this weight class. Lyons takes a ton of risks with writing form, and I think it really pays off. This series a great read, and I encourage fans of fantasy to read it.