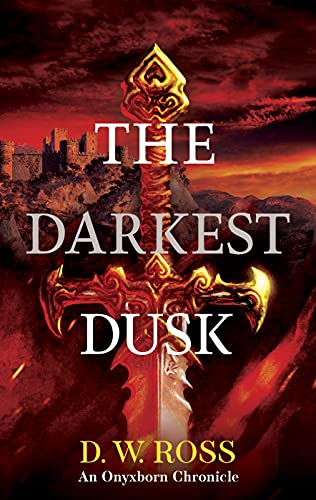 Following on from D.W. Ross’ debut novel Cold From The North, The Darkest Dusk is the next installment of the adventures of Ogulf Harlsbane and his allies as they attempt to thwart the advances of malevolent forces trying to take over the realm of Gelenea.

Battle lines are drawn all over the continent as the march of The Order of Maledict continues, Ogulf and his companions must summon magical weapons which have the potential to even the odds, and all the while powerful new players emerge among the fray, bringing with them vast armies and new abilities as the struggle for control intensifies.

With the fate of the world in the balance – can the march of the Onyxborn be stopped?

The Darkest Dusk is the second installment in D.W. Ross’ Onyxborn Chronicles series and the follow up to Cold from the North (which I reviewed earlier this year: review link). In the first book, I noted liking the plot, characters, and setting, but wanting more climactic events along the way to the end. In book 2, I think Ross did a nice of job sticking with what worked in the first book and expanding on those things while doing a better job with the narrative ups and downs.

The most impressive aspect of The Darkest Dusk, in my opinion, as book 2 in a series is in the way the author broadened the scope of the story. In Cold from the North, while the plot was enjoyable and there was more than 1 narrative to follow, it felt very linear, overall. The Darkest Dusk really expanded on the plot. We get more about the prophecy: what it means and how it affects everyone in this realm. In that same vein, the characters move around Gelenea a lot more, as well, giving readers more information about the setting. The characters themselves grow, too, as they are put in more harrowing situations and pushed to their limits. Plus new characters emerge that are set on putting this story on tilt! Ross made everything bigger, badder, and more magical than the first, and I am here for it.

The fact that Ross took all of the already-good factors from book 1 and made every one of them even better is a huge plus for this book.

The second big plus is that the narrative pacing was much improved, which is something I was calling for from the first book. I wanted more peaks and valleys, and I think the author delivered for the most part. I did feel as though there were still a few times when it could have been even better and I felt myself drifting, but those were few and far between. I was impressed with the improvement from the first book to this one, and I can only anticipate more in book 3.

I am looking forward to book 3, by the way. How does it all end? I need to know! Ross does a phenomenal job of setting the story up and loading it to brim with intrigue. I am really excited to see where things go from here.

The Darkest Dusk is a story of intrigue and prophecy, dark and light, magic and war. I definitely recommend it for fans of fantasy.