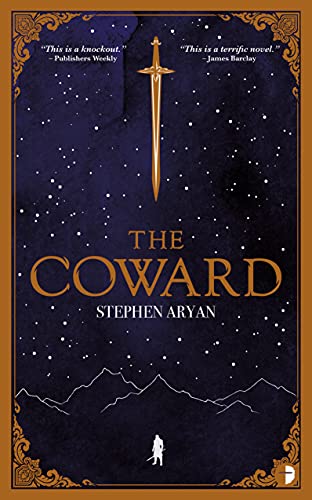 The Coward, by Stephen Aryan, is an adventure that takes place a decade after the world was saved from the Ice Lich thanks to the young hero Kell Krissia who returned alone after all the other heroes perished alone the way. Understandably so, that’s not the kind of life Kell wants to be a part of any more. After fighting a decade of depression and seemingly PTSD due to the horrors he experienced on his first quest, Kell is called on by his king to save the world once more. But frankly, he’s a coward now.

Luckily, Kell is not alone as a ragtag team of heroes and those seeking their own adventure find and join him, but they all have their own baggage that needs to be worked out alone the way. However, they better pull it together quickly before the new evil in the frozen north throws the world back into chaos just like the Ice Lich did 10 years ago.

As someone who loves adventure quest stories and also has personal mental health struggles of my own, I could not have picked a better book to read than Stephen Aryan’s The Coward. I have never read anything quite like this before. Aryan has taken an extremely popular adventure trope and truly turned it into something new and fun to read.

One of the best parts about The Coward is Aryan’s ability to make every character, even the heroes of legend (hope you don’t mind me using a WOT quote here!), relatable, human, and mortal. While some characters certainly have impressive skills that go beyond an average person’s ability, they all still have their own weaknesses and struggles such as depression, loneness or anxiety. I felt instantly connected to Kell Krissia, the main character, because of his brutal honest to himself about his struggles. He doesn’t seek to embrace his fame because he knows the truth. He knows his success defeating the Ice Lich was just luck and something he never should have been able to achieve.

The prose is fast pasted and fun. In true quest style fashion the characters move from one unexpected situation to another in a way that grabs ahold of the reader and makes it hard to put the book down. This is usually because of some monstrous beast or because of chapter cliff hangers that are horrible in the best kind of way. The world building is well thought out and filled with people and cultures completely unique to one another. After finishing this book I found myself wanting to know so much more about several of the people (and non people!) groups that came up throughout the story.

While there were a handful of things throughout the story that I questioned and wished might have been done or written a little differently I did not find any of them distracting enough or worth mentioning here.

The Coward is a fantastic fantasy novel that is easy to read, great characters, and a story with several surprising twists throughout. I highly recommend this to any fantasy fans and honestly this would be a great book to introduce someone into the world of fantasy literature without venturing into grimdark territory or having to worry about confusing magic systems that someone new to fantasy might find overwhelming. Definitely a book worth reading! I can’t wait for book 2 coming out in August 2022!